Long time after my last post, but here is one short article about two nice “standard” lenses tested in a field on Sony A7.

In the left corner – one of the holly grail standard lenses from the film era, holder of L title in the Canon World Lens League, highly sought after among lens freaks around the globe, Greaaaaaat, Faaaamooouuus, Canon FD 50mm f/1.2 L!!!!!! In the right coooorner, there is raising star with big S, lens that just recently entered professional ring, lens that despite its seemingly slower speed, doesn’t afraid to challenge even the best in the business such as Otus 55/1.4 with which it shares same Zeiss camp, all modern, all fresh, or beautiful –  Ssssooooony Zeisssss FE 55mm f/1.2.

Even the first look at the image above, clearly shows the giant leap in design evolution. What a shame, that Sony didn’t ask Zeiss to design their A7/r cameras too 🙂

Canon is actually smaller (shorter) lens, but with its E-mount adapter (as shot above), it equalize in that respect with Zeiss. However, Canon FD is slightly heavier lens.

Size might be surprising considering that FE 55/1.8 is actually full f-stop slower. There is AF of course, but thinking of Canon EF 50/1.8, Zeiss still seems bigger than necessary.

When you take caps off, the difference in speed and related glass diameter is more than evident. 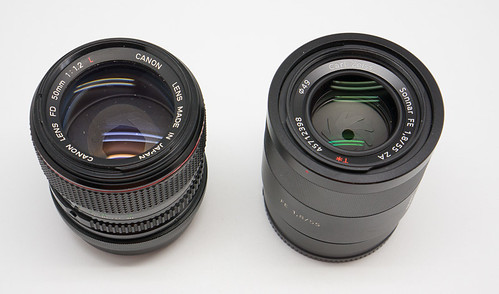 Much more glass on the left, but filter diameters are not so different – Canon has 52mm, Zeiss 49mm. Kudos to Sony for being quite consistent at 49mm across the lens line, because that can save not only finance but most importantly amount of necessary equipment and allow more convenient use of filter systems. (There is nothing as annoying as looking for the proper adapter ring for LEE system, or polarizer that is surely somewhere in the backpack, but can’t be found while sun is getting lower and lower…).

Even more significant difference is on the rear side of the lenses. 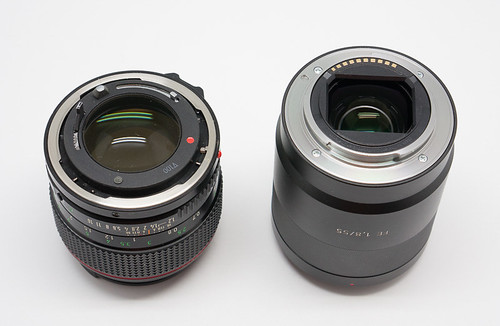 As you can see, Canon rear glass element is almost in the same level as the mount itself, while Zeiss is deeply recessed. Rear element is also wider (it has to deliver twice as much light) but lack of baffling might cause some flaring problems, related to the sensor reflections (it wasn’t problem with the film). In my brief tests on Sony A7 (camera that has sensor reflection problems) I haven’t noticed anything significant though.

Built quality of both lenses is very good, but I have to give an edge to Zeiss in that regard, it looks more refined and more importantly it is supposed to be weather sealed.
On the other hand, while Zeiss has well engineered focus ring, it is still focusing by wire, and that will never result in a subtle tactile feeling that well dampened MF focus ring gives.

Image quality
Both lenses were tested on Sony A7 in this article. (In some upcoming articles I am planning to use Sony A7r and Sony a6000 for lens test too). 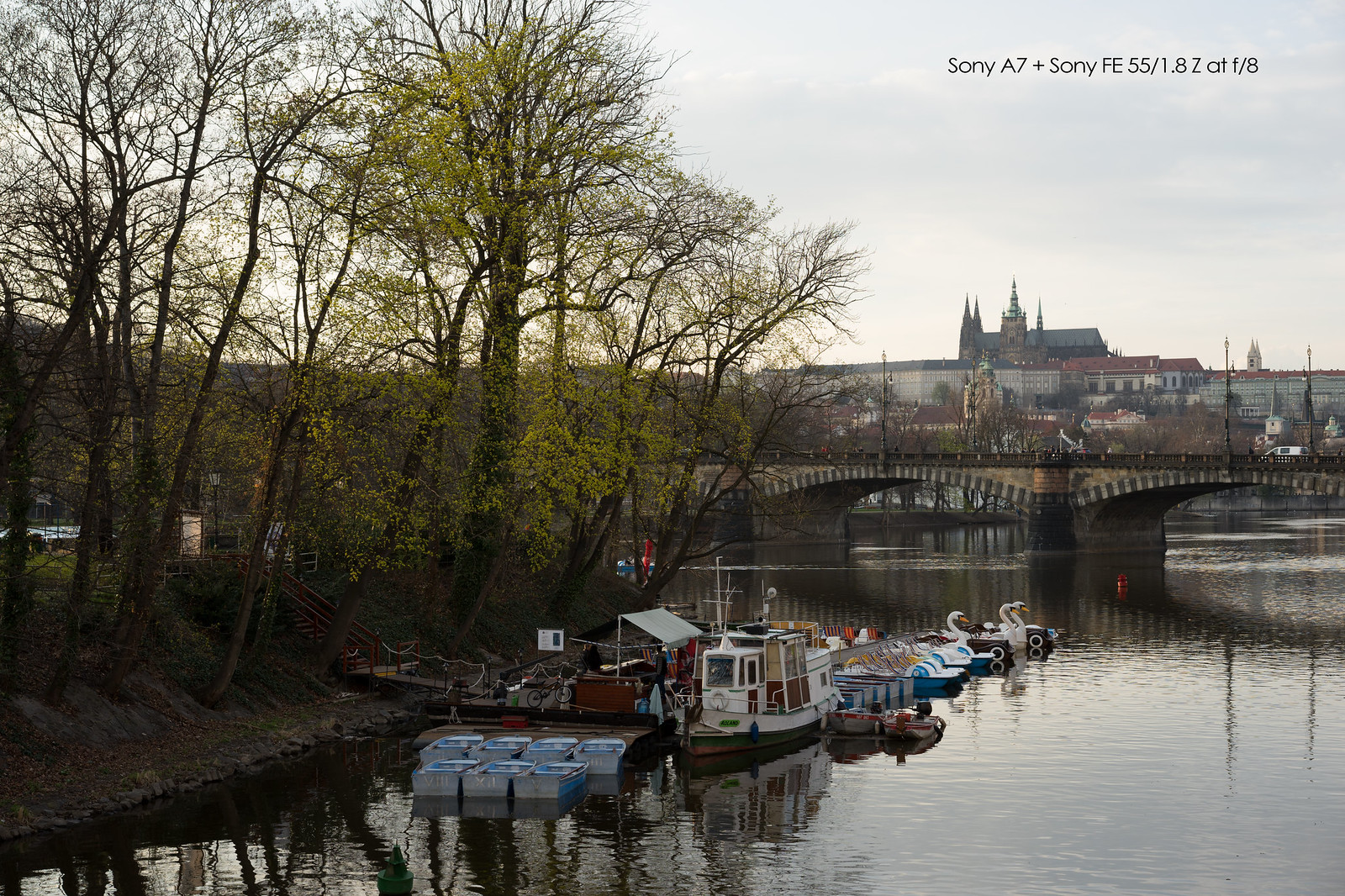 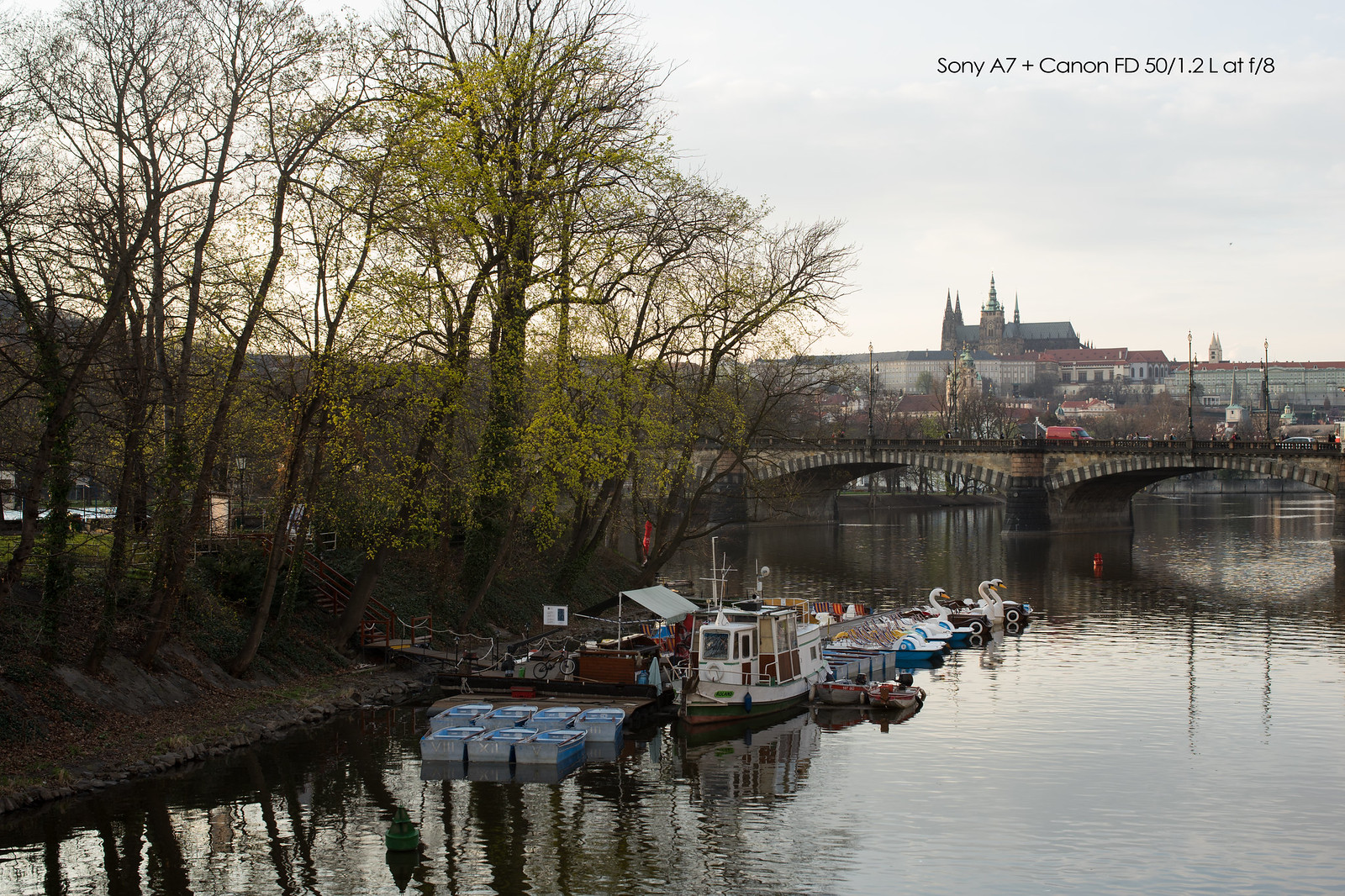 And few comparison crops at 100% 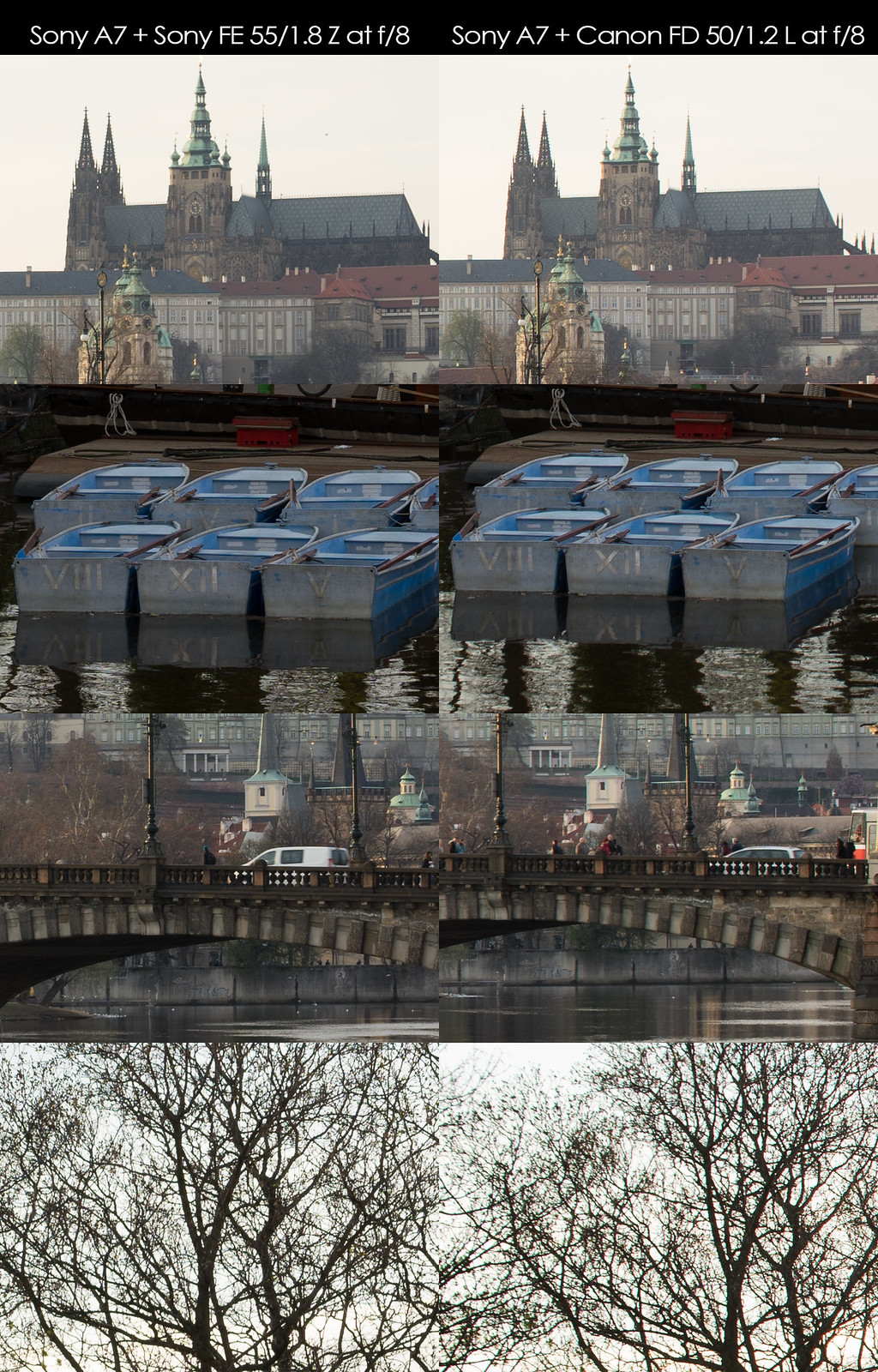 While in Lab Zeiss 55/1.8 Z (DxO, Photozone etc.) deliver amazing resolution results on Sony A7r and A7, in a real life, those numbers doesn’t shows up that significantly. At least, I can’t see some deal braking differences at f/8 from the image above.

Both lenses performs really well in this test scenario as far as I can see.

Here is another comparison scenery at f/5.6. 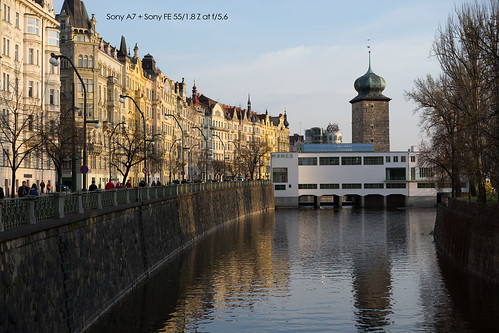 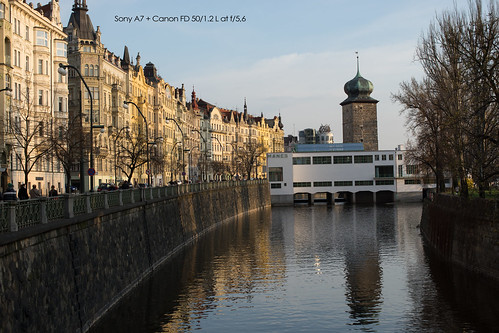 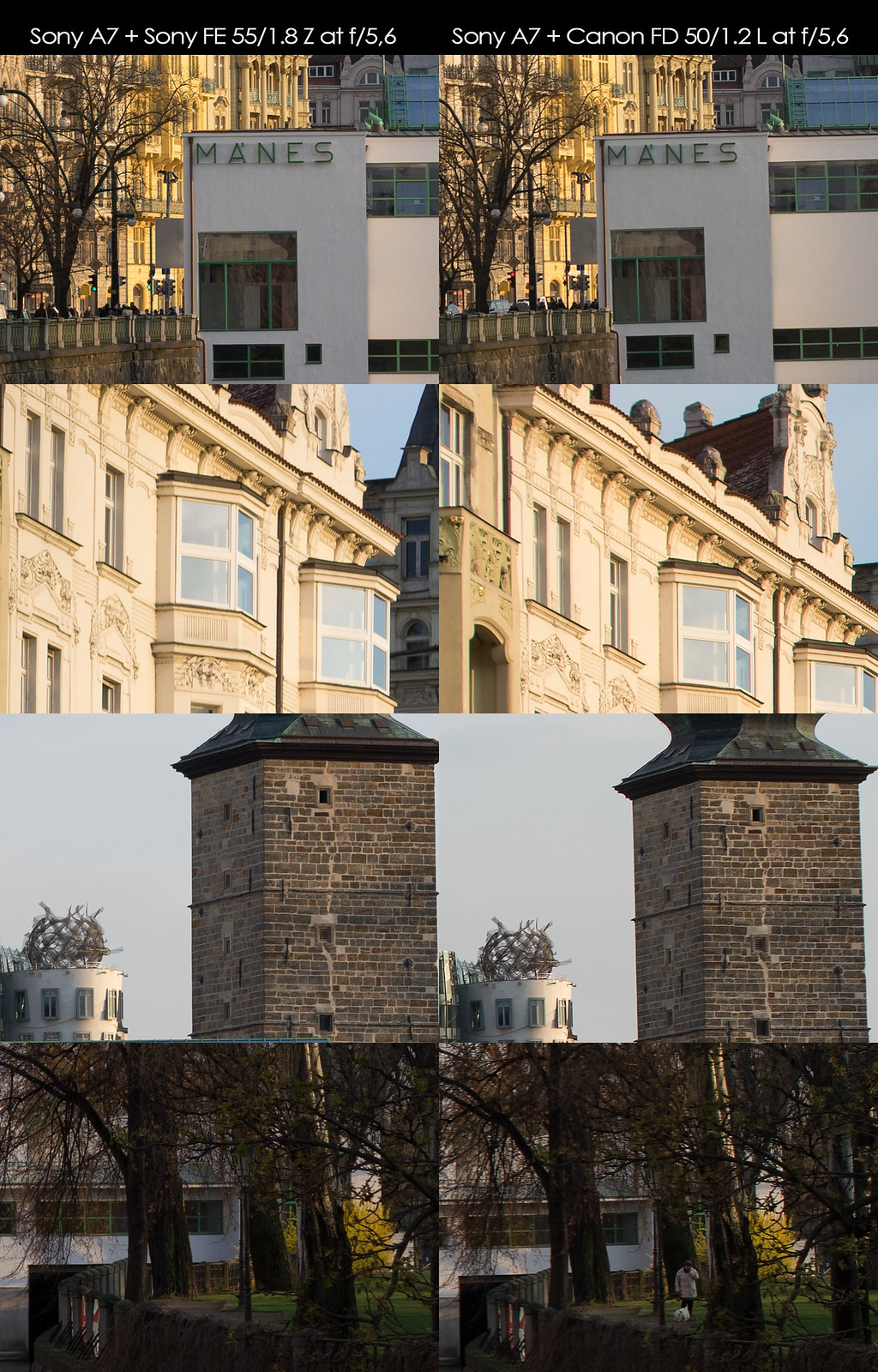 At f/5.6, some slight edge in resolution should be given to Zeiss, but the questio is how much that is a) field relevant, b) result of slightly larger magnification (55 vs 50mm), c) differences in a focus plane.

Overall, I don’t think that anyone would complain about resolution of either lens in a real life, especially when you find something more exciting to shot than I did.

Where I can see differences though is color rendition. Zeiss shifts more toward magenta while Canon toward green. While I usually like those greenish Canon colors more, I have to say, that in this case, Zeiss 55/1.8 attracts me much more. 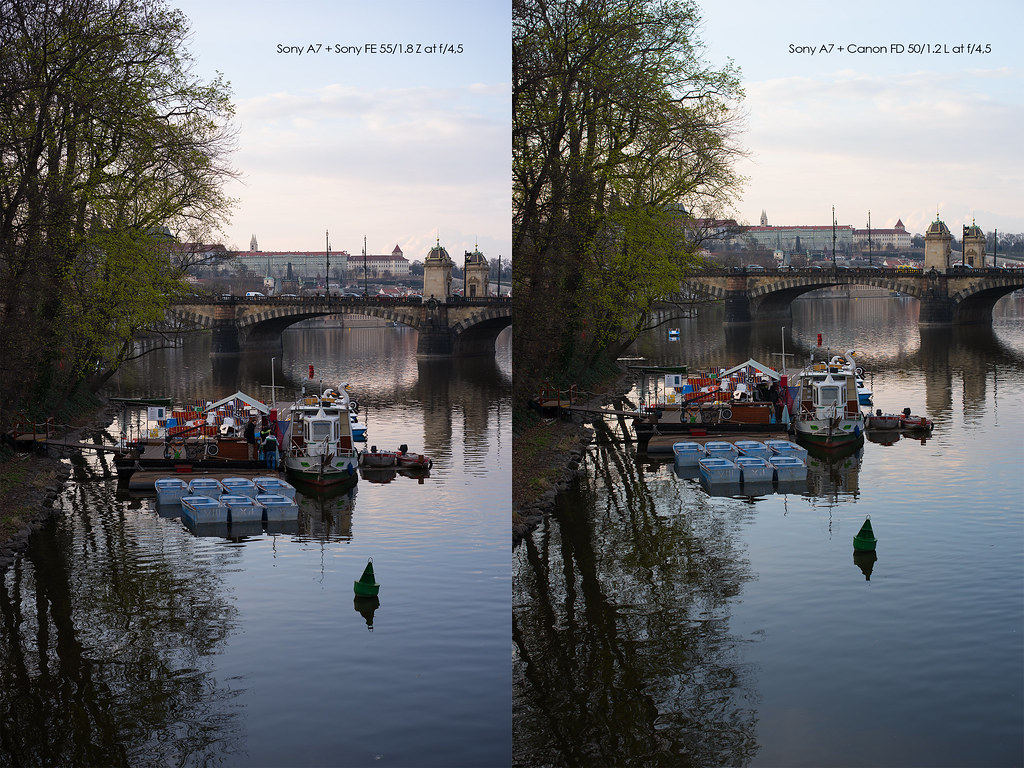 Not a big deal, but you can see more magenta in the sky and water on Zeiss shot, and that makes overall color feeling more appealing to me.

I also tried to apply my post processing routine to the shots above and here are related larger crops (still 100%, but larger crop from the original image). 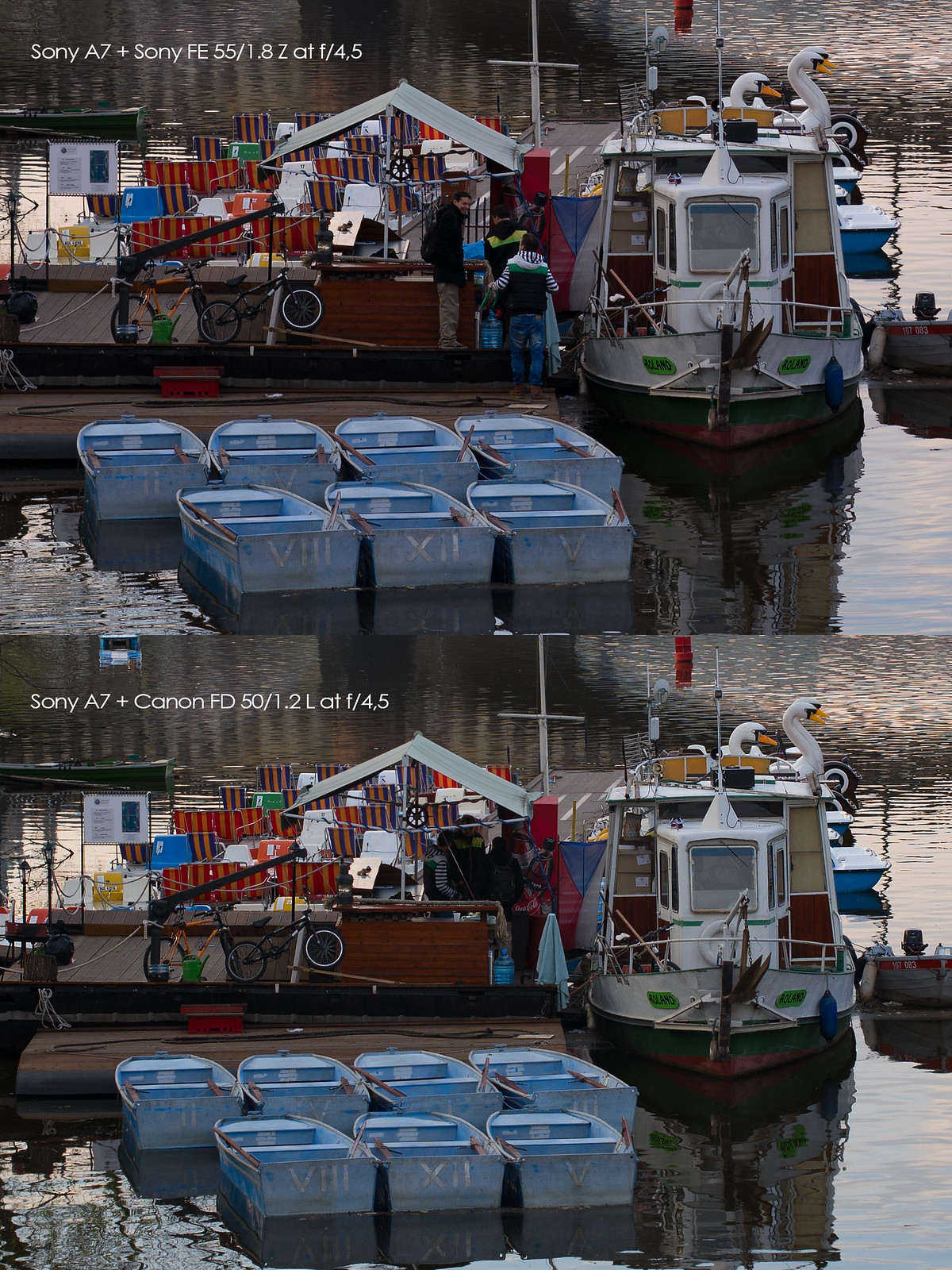 There is little doubt that despite raving reviews about Zeiss 55 f/1.8 Z resolving power, one can see almost no difference at most apertures smaller than f/4 between those two lenses in that regard. But is is also obvious, that both lenses renders outstanding amount of details.

While those fast standard lenses are used in many photographic situations, they are most often used for shallow DOF photography. As I have no nice models to stand and pose, all I can show here is a little spring green just showing up on the trees. 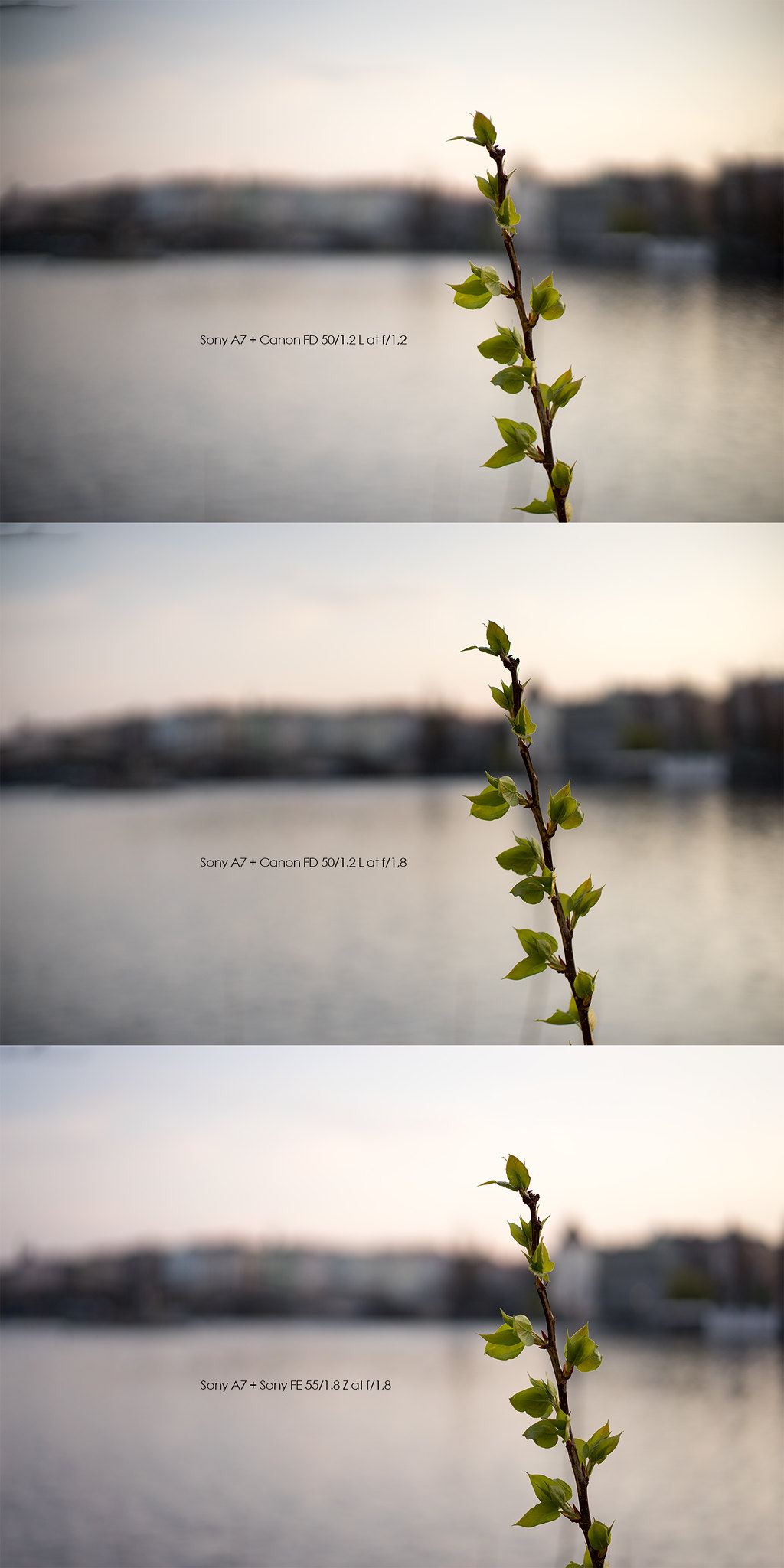 While Canon FD 50/1.2 L wide open does blur the far background just a little bit more, what is much more apparent is its vignetting at that aperture.

Difference in DOF will be more significant if the background would be closer to the subject in focus, but than there are lenses better suited for subject isolations. In the setup above, bokeh looks OK, but nothing more than that. Don’t jump on me please, both lenses delivers nice bokeh in this situation, but Canon EF 50/1.2 L is much smoother and MOG Primoplan 58/1.9 (e.g.) will go swirly circus, so both will deliver something more distinguished.

So far, it seems that both lenses handle CA quite well too, but I am sure that in a critical conditions (high contrast areas in back light and shiny highlights in general) Zeiss will beat Canon due to moder coatings.

Finally, comparing sharpness and bokeh in the evening scene, didn’t reveal any drastical differences either. 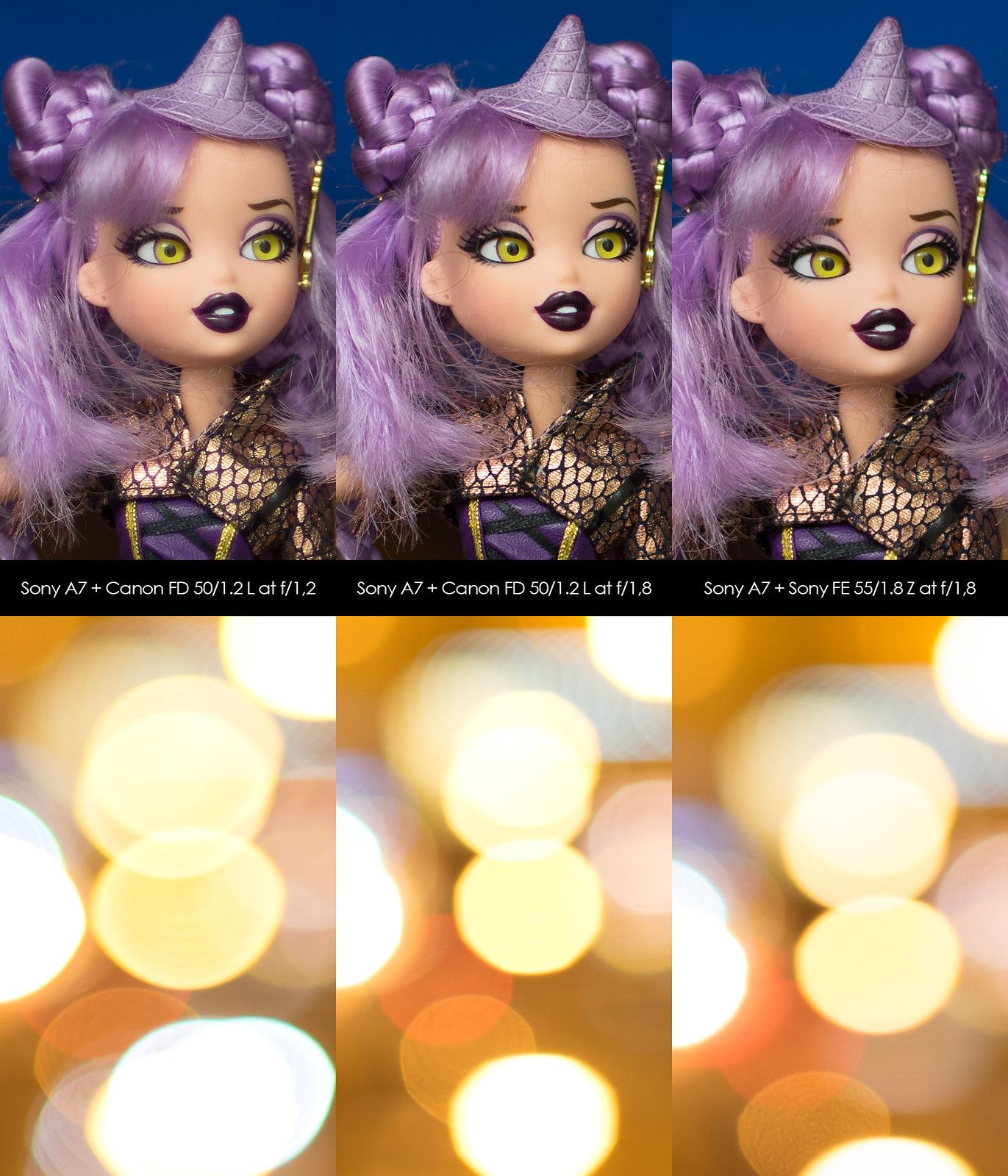 You can see some green highlight outlines on Canon wide open which disappears stopped sown a bit, while Sony is “cleaner” in that regard. Overall Zeiss delivers more pleasing rendering of highlights in my opinion.

One thing is important to add here – Zeiss has 9 blades aperture, while Canon 8. That would be apparent at smaller apertures and it is matter of taste what you would prefer. I like 8 blades slightly more.

Who is the winner of this match?

The owner of either lens.

Both lenses are much better than I will ever be as photographer, and both will make their owners feeling special and rewarded with some signature images.

In a direct comparison I would say that I expected Zeiss to be really good and it certainly didn’t disappoint, but it’s rather Canon that really surprised me.

Here is my little summary:

OK, Zeiss is better, but not by miles and Canon can be found cheaper.

If you don’t need AF, investing in Canon FD 50/1.2 L is not bad idea. Unlike new Zeiss, there is only limited number of Canon 50/1.2 Ls now on the market, and there is little to break (no AF, electronic contacts, etc.) in the future, so it might retain its value better too.

Speaking about performance, in most situations you will hardly see field relevant difference and that extra stop of Canon, can be sometimes very useful.

One thing is clear – whichever you choose, you will have great lens to enjoy for years.

Please help support this page and upcomming reviews and buy through affiliate links, with no extra cost for you:
Buy on BHPhoto: Sonnar T* FE 55mm f/1.8 ZA Lens