After I tried the lens in store during Sony promotion (first pictures bellow) I decided to buy one myself.Therefore I am re-writing this blog and will add more info, to keep it updated with my personnel user experience.This is not a serious test by any means, but in the time of writing this post, there are not many samples with this lens on a Sony NEX 7.

Couple of words about the lens itself. When you pick the lens in a hand, you might struggle to believe the price tag. To be honest, when I took it from the representative, I had to double check that I am holding the right lens. 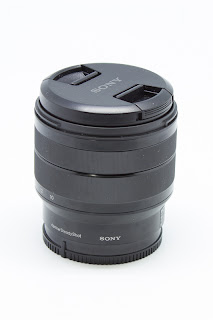 At the first glance, it just felt almost like my Canon EF 50 f1.8 II. But that was just initial impression.

Looking closer and trying zoom and focus ring, it is entirely different story. Everything seems well compound, both rings are nicely dampened and moves smoothly. It is incredibly light, which is rather a good thing. It seems that the lens barrel is plastic covered with aluminum shell, very much like most of the Sony E-mount lenses. Personally I would still like it to be a bit heavier, but that is me, and I am sure, many of NEX users will appreciate its feather weight. It comes with a petal shape hood, which I apreciate quite a bit. Canon, do you hear? 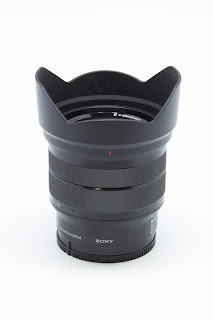 It is not a small lens, but not huge either, and I think Sony made it right this time, choosing for this type of the lens, slower (but constant) aperture in favor of smaller size. Considering permanently improving performance of a recent Sony sensors in low light, despite f4, it should be possible to use it  indoor hand held. (In those situations, OSS will certainly help).

Here is the lens on my NEX 7 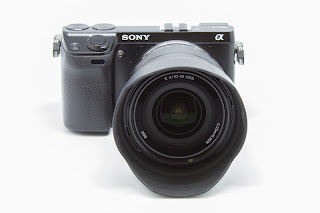 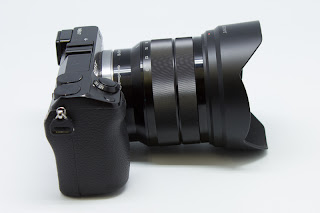 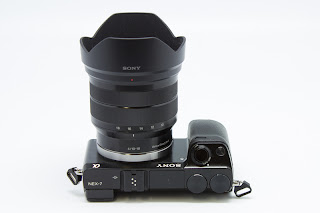 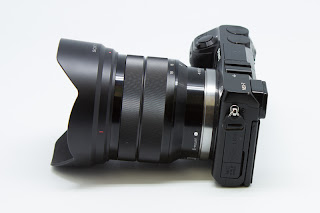 Before I post the pictures from this brief trial, I had to say that I was rather skeptical.

Few weeks ago, I grabbed one of the first NEX 6 with a new 16-50 f3.5/5.6 PZ OSS that comes to my country. I was quite excited, until I checked RAW files at 16mm. Lens vignetted so badly, with a distortion “fisheye” like. I returned the whole kit the very next day. Many people on forums are arguing, that all those optical flaws could be software corrected.

But many people are also arguing that you can simulate DOF with a software, correct for the extreme distortion, micro contrast and resolution. This all can be true, until you print out and compare A3 + and larger, optically corrected image with a software corrected one.
I am not against this approach, for many users it can be perfect to compromise optical performance in favor of size, weight and cost. It’s just not my cup of tea.

I am writing this, just to explain the reason for my skepticism. After a brief test, however, it showed-up that the lens has remarkable optical qualities on its own. As most of the UWA zoom lenses it does need some software correction, but apart of the magenta cast, that I will write later about, this correction should be applicable within reasonable margin.

Thinking about lens design, it looks nice, but it is hard to see any consistence in the Sony lens line. It is black with a glossy finish, that I suspect could be prone to slightest scratches, when carried in a bag.

Initial in-store test convinced me to get my own copy. The problem with magenta cast didn’t show-up in first images, and I discovered it later with my own sample.

But here are those first, in-store samples. There are lot of images with a same, boring subject/composition, but in the image description focal length and aperture are listed, so you can check only those images that interest you most. (Clicking on the image should open it in a full 3200px wide size).

Please consider, that as noticed above, I tried the lens in a less than ideal circumstances, and one of the shots – at 18mm and f4 suffers from camera shake. In a real life, with a sturdy tripod or in a good light, results should be only better.

All files were shot in RAW, developed in LR 4.2, WB equalized, and standard + 25% sharpening applied. Without any other correction files were transfered to PS. There, they were composed and resized for the web. In the circles are 100% crops of the respective area.

Please note, that following image is compromised by motion blur.

When I managed to get my own copy, I went with a wall test to check for vignetting and magenta cast, reported by some other early adopters. Unfortunately there is plenty of magenta color cast on NEX 7..

Here are 4 shots that shows the problem…

However, its not that simple as it looks here. While magenta cast does show in this challenging conditions, I am still not sure how much it does influence the output in a real life situation.

Before I come to differences within field relevancy and white wall, let me say that NEX 7 jpeg engine doesn’t help with magenta cast. It does correct (when set to) distortion and probably some CA, but not color cast itself.

Here is comparison of RAW vs JPEG on a structured white wall in a cloudy, diffuse lighting conditions.

RAW image were developed in LR 4.2 with a standard sharpening and no other correction. Jpeg is OOC. As you can see, Magenta cast is less pronounced than flat wall test, but it is still there. This could be because of exposure metered for the 50% gray (the first wall is overexposed for approx. 75% gray to white, and because the first samples were shot under artificial fluorescent lighting, where blinkering could affect resulting image.

It is very bad weather where I am living now, so I couldn’t go out to make some proper field tests (raining, snowing, bad visibility), but as soon as weather improves, I will try to do it. Meanwhile, I was curious to see, why magenta cast showed so strongly in the first wall test and I haven’t noticed it in-store tests. (I also saw it on some field tests from the other users). So I made just a fast snap at 18mm and f5.6 and again, I can’t see the effect in a real life situation. Check it for yourself…

This time I corrected RAW (above) for CA and fringing in LR 4.2. Result is better than JPEG OOC correction (look at the branches on the right top).
After this shot I pointed camera to the cloudy sky, just to find magenta to get back, but certainly not to the amount shown on a first set of the wall test.

My thoughts about the lens are mixed right now. I can’t really recommend it yet to NEX 7 users, but it seems that at 18mm, magenta problem is not much field relevant. In those few real life situations, that I managed to test it so far, it does not seem to be big problem even on 10mm, but in a certain circumstances it could appear for sure.

Anyway, I believe, that magenta cast is not a lens problem itself, it is rather caused by NEX 7 sensor, so looking to the upcoming releases from NEX line, Sony might come with a solution for this  problem. In other aspects so far tested, lens perform really well, showing excellent center resolution right from f4 with a corners catching up at f5.6. At f 8 the resolution is very even across the frame and corners are pretty clear, which is great news, considering how difficult is to design such a lens.

Here are few snaps from the shopping mall, more images and findings should follow, once the weather and time allows me to make more tests.

Links to the other parts of the review:

Your thoughts are always welcome.