After initial impressions about SEL 1018 f4 OSS, which were rather positive, I decided to compare it with SEL 16 f2.8 plain as well as with mounted VCL-ECU1 0.75 wide angle adapter.The reason is to see, If I need to keep SEL 16 or not.I have to say, that I was never really happy with SEL 16 f2.8 because of its poor extreme corners performance on my NEX 7. On NEX 5n, results were slightly better, but I never managed to get sharp corners, no matter which body I mounted it on, or which aperture I set.

There is obviously one big advantage of SEL 16 f2.8 and that is the size. I am not saying weight, because SEL 1018 f4 OSS is so light, than in a real life, it doesn’t make any difference comparing them. 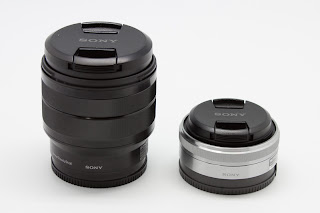 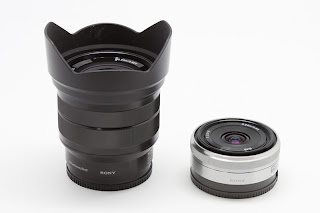 Size advantage is significant, and if that matters to you, SEL 16 f2.8 is probably the smallest lens that you can mount on NEX. This combination results in a system, that can fit in most jacket pockets.

Mounting VCL-ECU1or VCL-ECF1 on SEL 16 f2.8 significantly close the size gap, but any of those two combination will still remain smaller, than a plain SEL 1018. 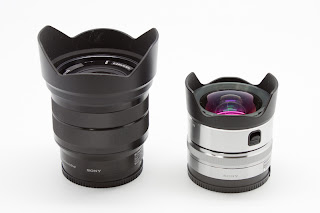 VCL-ECF1 is another reason to consider keeping SEL 16 f2.8, if you like fish-eye effect. 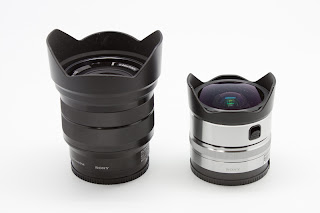 There were plenty of discussions about QC and sample variations of SEL 16 f2.8. I can’t comment on those (having only 1 sample), but mine certainly suffer from corner smearing.Mounting VCL-ECU1 further decrease corner quality, while surprisingly VCL-ECF1 seems to improve it. (I will show that later.)

But let’s see how both lenses performs against each other.

For the following test I selected a structured wall from a close distance (approx. 50 cm). As always, NEX 7 was on a tripod, remote controller or shutter delay (2s) were used, in this test I used MF instead of a single spot AF (that was maybe a mistake, considering small distance from the subject), files were developed in LR 4.2 with a standard sharpening (amount 25, radius 1, detail 25) and noise reduction (Luminance 0, Color 25, Detail 50).
Files were than opened in PS CS5 and composed for the final output, without further adjustments.

Here are the results at 16mm and f4
(Please note, that the slight difference in framing is caused by different size of the lenses. In a proper test, I should move the tripod closer with a SEL 16 f2.8, but in a field, trying to keep lighting condition as similar as possible, I decided not to. I don’t think that this will make any significant difference in a lens performance, but you should be aware of it.)

You should click on the image to open original size to see the differences. In my opinion, SEL16 f2.8 holds very well against SEL 1018, being actually sharper in the corners, but failing in the extreme corners due to the smearing. SEL 1018 holds well, with visible softer corners than a center, but this is to be expected for such a lens wide open.

Here are results at f11

The difference here is much more obvious. SEL 1018 corners are significantly improved by stopping the lens down to f11, while SEL 16 f2.8 improves too, but the extreme corners are still very bad.

Enough with the walls (well almost), as I do not expect many users to use any of those two lenses at such short distance, wide open, with a flat field subject and expect super crisp corners. Let’s see how will they perform at larger distance (approx. 7m) from the… well wall again, but this time there are some windows at least 🙂

Here are results at f4

In a more likely shooting scenario than closeups of the wall, corner smearing on SEL 16 f2.8 are making all the difference. While center sharpness is excellent from wide open, even slightly better than SEL 1018, extreme corners are nothing short of disaster. There is nothing one can do with this, except to crop the image. Resolution of NEX 7 can easily allow that, but for any serious work it is rather difficult to guess the composition in advance.

SEL 1018 on the other hand, deliver very good sharpness across the frame. I was pleasantly surprised. There is plenty of CA, more than on SEL 16 f2.8 (maybe because it is already stopped down at f4), but that is easily correctable in LR.

Let’s see if stopping down will help.

Here are results at f8

Well, it certainly does help. But there is no doubt, that SEL 1018 is still much better in the extreme corners. In the center, both lenses are excellent. (Remember, there is only standard sharpening applied)

In most situations our subjects are not flat fields. So stying at the same location, let’s change the angle to get some perspective.

Here are results at f5.6

This is very obvious scenario in which the part of the scene, close to your tripod or legs ends in a frame. In this test, SEL 1018 performs incredibly well, showing almost sharp extreme corners, unlike SEL 16 f2.8 that suffers as in all tested scenarios from a corner smearing. In this case, effect is even more pronounced and not linked only to extreme corners, at least at the bottom part.

Some people says, that mounting VCL-ECU1 actually improve corner performance of SEL 16 f2.8. Well, this is not the case with my sample, but there is no reason not to believe them, however, I would like to see original RAW files that confirms so. My combination with this ultra wide extension is simply awful. Here is the test from the previous scene that makes it clear for me.

There are lot of CA, but nothing that LR 4.2 will not remove with a simple click. As mentioned, corners , especially in the bottom part are IMO improved in comparison with the plain SEL 16 f2.8.

Let me summarize my findings and thoughts. YMMV.

So, as usual, it is not B&W when it comes to the conclusion. For me however (for landscape and cityscape), there is little reason to keep SEL 16mm f2.8.

But for many others, it can be a better choice.

Here are the links to the other parts of the review.

Thanks for reading and let me know what is your opinion.