There were so many exciting gadgets on Photokina, that it was easy to miss two very interesting lenses. Luckily my friend mentioned Irix lenses https://www.facebook.com/Irixlens/, and while I didn’t find their stand, I spot instead Laowa. Venus Optics – producer of Laowa lenses is a new Chinese camera lens manufacturer based in Hefei, Anhui, which already delivered some rather unique lenses.

Laowa 15/4 Macro lens with shift ability is truly one of its kind, their 60mm f/2.8 Ultra-macro, goes natively up to 2:1 magnification, while 105/2 STF is one of the few lenses with built-in apodizing filter for ultra smooth bokeh rendition. 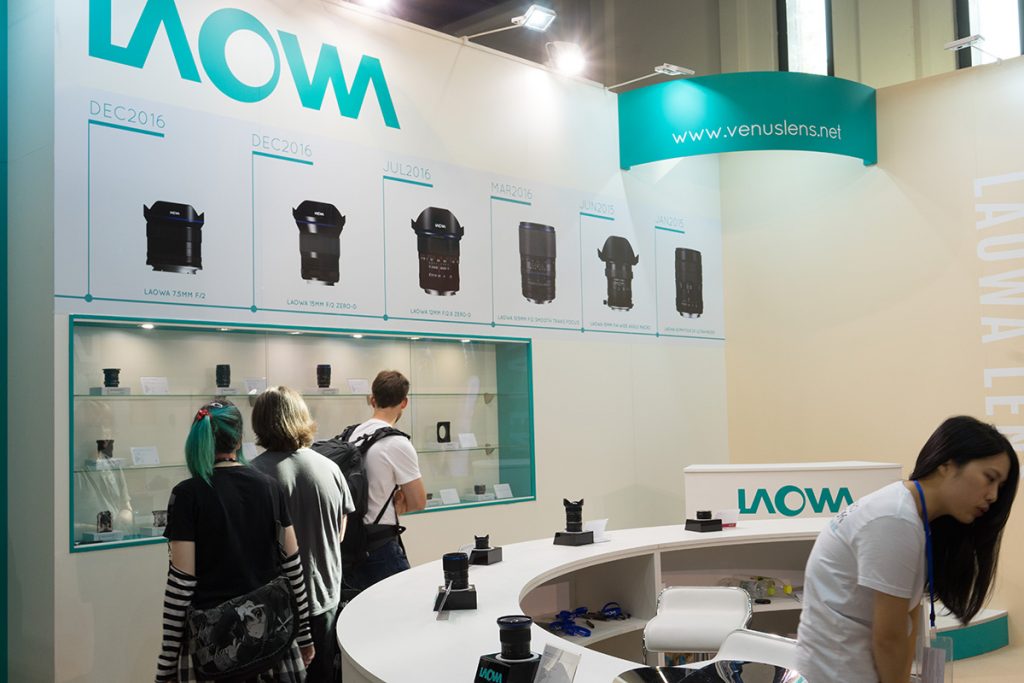 On Photokina 2016, we could see two new lenses – both with Zero-D designation, claiming to have almost no distortion at all. (Funny sign on the lens says – “Dreamer-D” :-)) 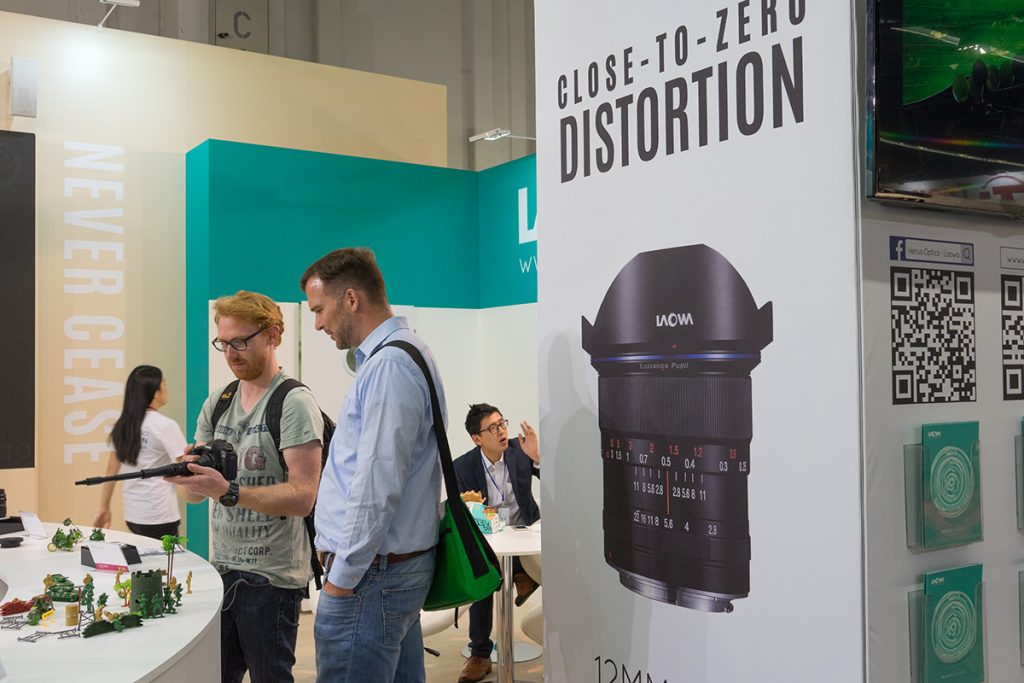 I tried both lenses and in those very limiting conditions around Venus Optics stand, I found both lenses to be thrilling. 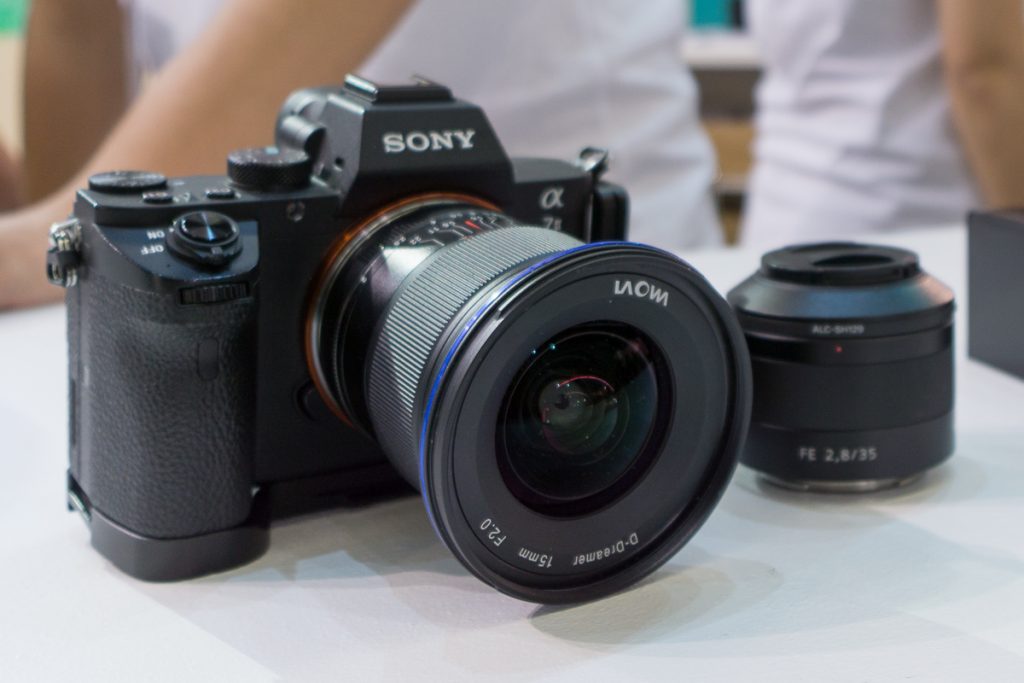 Lenses are not made up to Zeiss built quality standards (not they cost that much), but they feel quite solid in hand. They are fully manual lenses, which means not only lack of autofocus, but also of any electronic information sent to the camera – No EXIF, no focus distance report, no in camera lens profile correction, no automatic functions such as EVF image enlarging when turning focus ring. I am used to work with Samyang 14/2.8, so for me it is not a big deal to have fully manual lens, especially this wide. 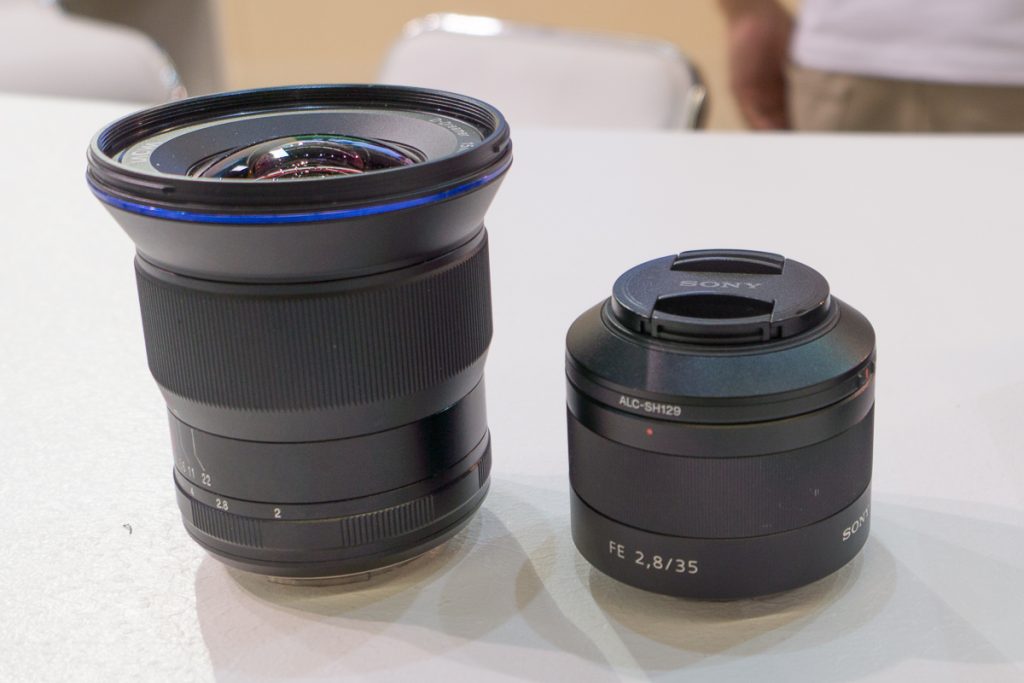 There are few things worth mentioning:

1: Distortion really seems to be exceptionally low, with 15mm/2 I am not afraid to claim that it is well under 1%, but probably much lower and with 12/2.8 is just slightly more.

2. Image quality looks very good initially. I couldn’t detect much of CA and image is sharp up to the extreme corners (that falls well into DOF of course).

3. Both lenses are among fastest at respective focal length in the world (they are full frame lenses).

4. Someone very smart, said why we don’t put the mark for the middle of the entrance pupil (wrongly named Nodal point) on the lens, so panorama lovers doesn’t have to look for it by moving their camera forward or backward, trying to eliminate parallax error. There is a little red dot close to the lens hood, showing entrance pupil.

5. From (amazing) sample shots, it looks that both lenses have very well corrected coma, which is great news for astro-photographers. You can read full specification of Laowa 12/2.8 and see tons of sample images on their official site – http://www.venuslens.net/product/laowa-12mm-f2-8-zero-d/where you can also pre-order lens with shipping date starting at November

6. Both lenses are rather small and light.

7. For both lenses it should be possible to use 100mm system filters (LEE, Hi_Tech etc.) which is rarely case with UWA lenses (Most of them require 150mm systems, which are bulkier, and more expensive).

I can’t really tell about light fall off without proper testing, but it seems rather strong unfortunately. I couldn’t see on my Sony A7 MII corner color shift though.

I will try to get lenses for detailed review, and even if I don’t succeed in getting samples, I will most probably order them for myself.

They really made a very positive first impression on me.

While on above linked pages you can see several sample images, all really impressive, I can only show you few shots from around the stand, but it is still visible that distortion is really low. 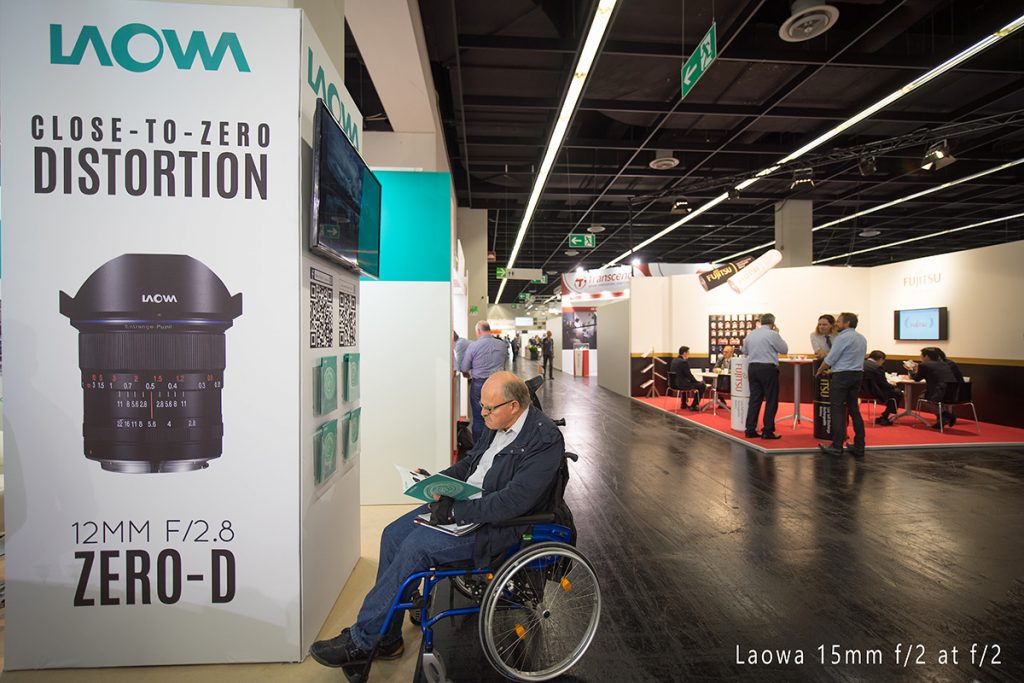 You can see original size image, clicking on the flickr link – https://flic.kr/p/LFZe1d 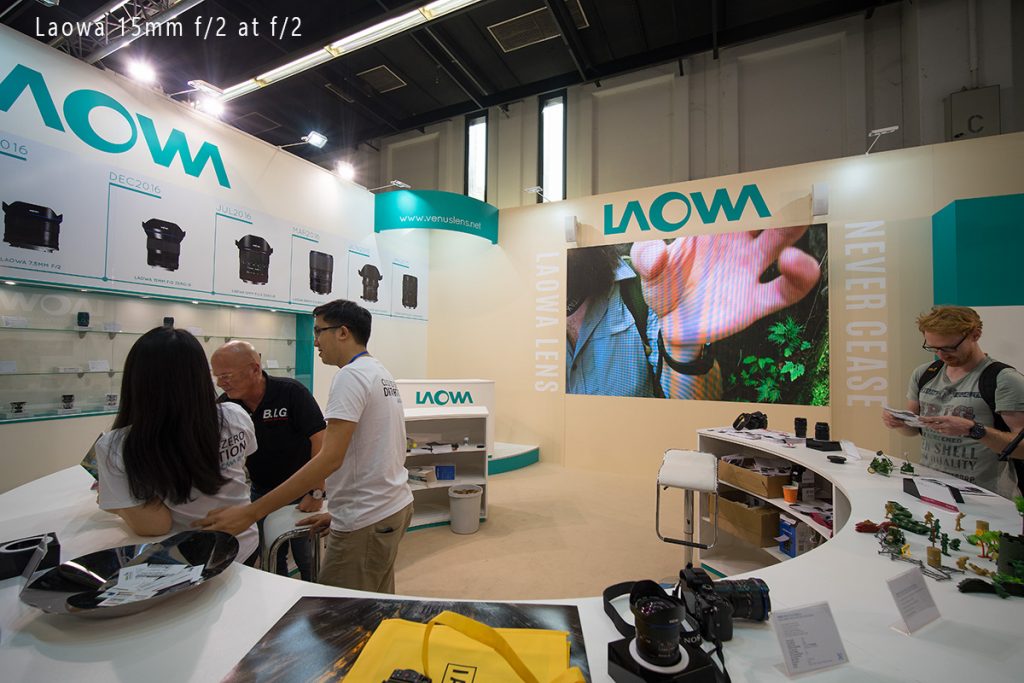 You can see original size image, clicking on the flickr link – https://flic.kr/p/Mw43YF 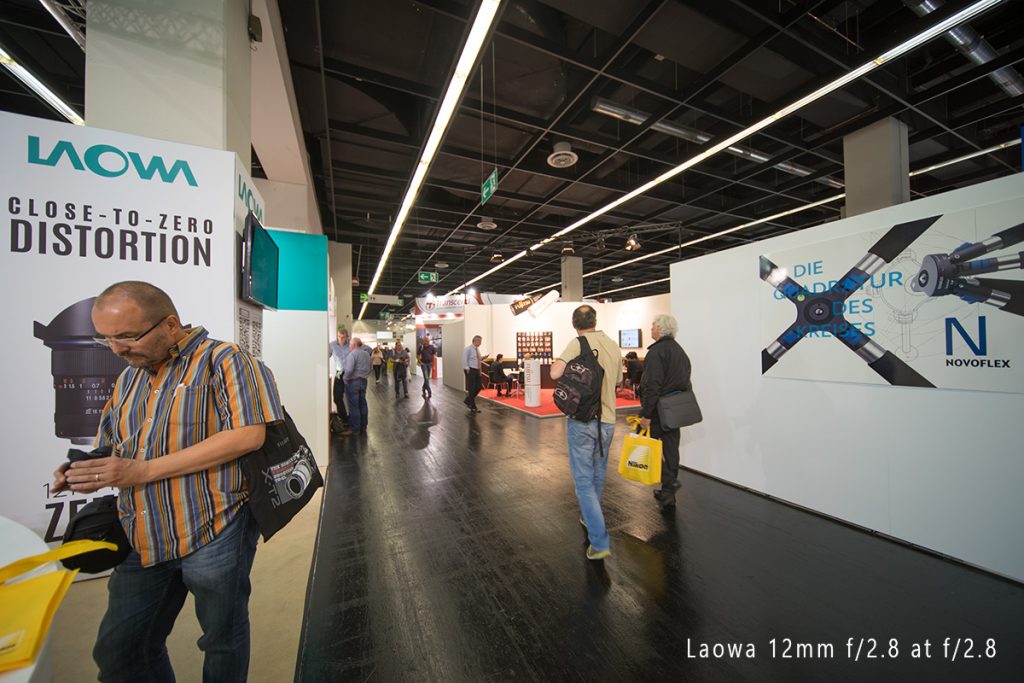 You can see original size image, clicking on the flickr link – https://flic.kr/p/MtmJf1 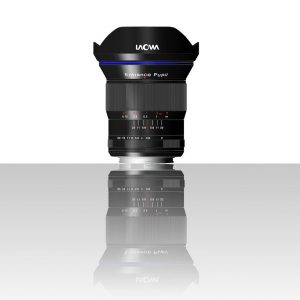 Laowa 15mm f/2 FE is currently the World’s Fastest 15mm rectilinear lens for Full Frame cameras. It features a close-to-zero optical distortion, allowing photographers to take landscape or architecture shots with straight lines retained. Dedicated to fulfill the need of photographers, Venus Optics have managed to add a 72mm filter thread onto the 15mm f/2 lens. Photographers can easily install standard screw-in filters without paying for an expensive yet bulky filter holder system.
Designed specially for the Sony Full Frame Mirrorless cameras, Venus Optics has successfully controlled the size and weight of the lens to the minimal. Weighing less than 1.1 pounds (500g) and 82mm in length, the portability and compactness of the Sony Emount Mirrorless cameras can be maintained when used with the Laowa 15mm f/2 FE Lens.

Featuring the fastest f/2 aperture ever built with a 15mm lens, the new Full Frame Emount lens is engineered for professionals to shoot impressive landscape, architecture and primary astro photos with great details. This is an every-day and must-buy lens that every Sony Full Frame Mirrorless camera user should have one in his bag. 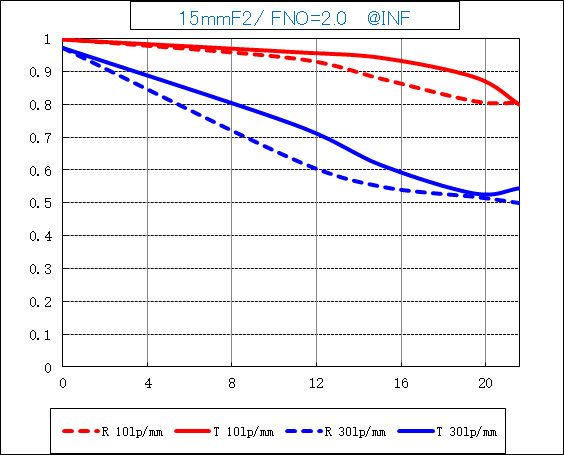 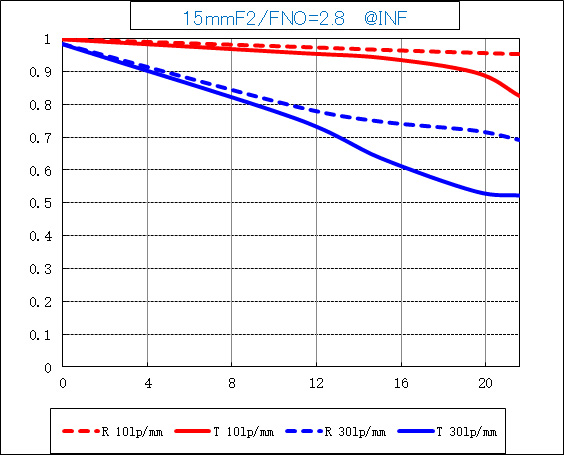 Venus Optics Announces Laowa 12mm f/2.8, the *World’s Widest f/2.8 Lens with Close-to-Zero Distortion. Featuring an ultra-wide 122° Angle of View and weighing only 1.34 pounds, this is also the world’s *fastest 12mm lens for full frame cameras. It is now on Kickstarter. 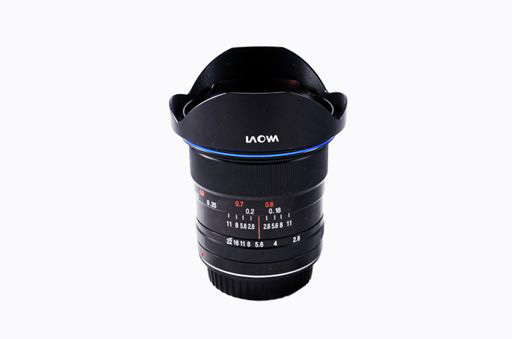 The new Laowa 12mm f/2.8 Lens features a close-to-zero optical distortion, allowing photographers to take landscape/architecture shots with straight lines retained. Featuring a widest angle of view (122°) ever built with a f/2.8 lens, the Laowa Lens is an ideal lens for a variety types of photography. From landscape, architecture, interior, travel to the most important one, astro photography. The combination of ultra wide-angle and fast aperture makes this lens a perfect tool for creating impressive milky way shots.

The Laowa 12mm f/2.8 Lens is designed for photographers for everyday use and hence the weight and size has been controlled to the minimal. The lens weighs only 1.34 pounds (0.6kg) and has a front diameter of 77mm. Venus Optics also offers a filter holder which is designed to fit 2 pieces of 100mm filters and 1 piece of Circular Polarizer.

The lens incorporates with 16 elements in 10 groups optical design, including 3 pieces of Extra-Low Dispersion elements and 2pc of Aspherical Elements. This design not only delivers an outstanding image sharpness and controls the distortion to the minimal, but also controls the chromatic aberration at its lowest level. A floating design is also adopted to ensure a good performance even in the closest focusing distance (0.18cm). The enclosure of the lens is fully made of metal to strengthen its durability. Canon EF, Nikon F, Sony E, Sony Alpha and Pentax K mounts are available.

Laowa Magic Shift Converter
Along with the new Laowa 12mm f/2.8 Lens, Venus Optics also announces the Laowa Magic Shift Converter which is able to enlarge the full frame image circle through the 4pcs of elements inside the converter. The enlarged image circle provides sufficient image field for lenses shifting by a maximum of 10mm without vignetting. It will transform the Laowa 12mm f/2.8 Lens (DSLR mount) into a 17mm f/4 Professional Shift Lens with +/- 10mm shift capability for Full-Frame E-mount cameras. It is a perfect tool for professional architectural photography. The principle is explained in below diagram. 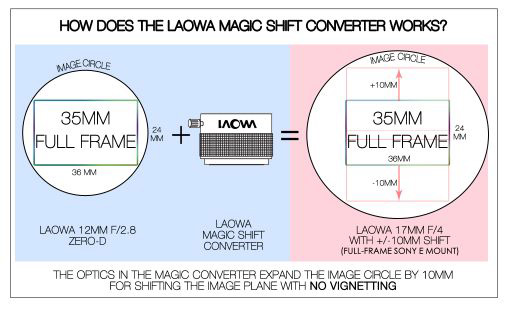 Pricing and Availability
The Laowa 12mm f/2.8 lens will firstly be available for backing via Kickstarter from July 30 (EST Time) onwards. It will then be available for purchase at authorized distributors and resellers from Sept 2016 onwards. The recommended retail price without tax is USD 949. 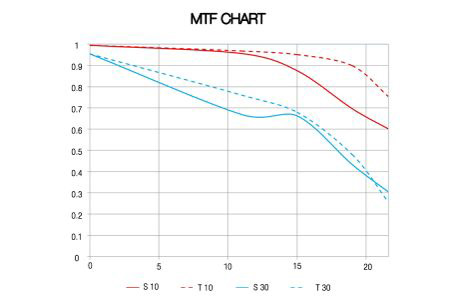 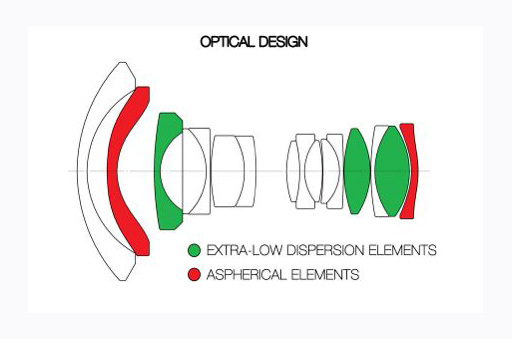