I needed a break from comparison series, so I dug deep into drawer to find few Robot lenses…

Robot – the word was created by Karel Čapek – Czech writer in his novel R.U.R. from 1921. Since than, it become worldwide synonym for intelligent or automatized machines (simplified).

But Robot cameras were German. And the original idea come from watchmaker. Mr. Kilfitt Heinz. (remember those amazing Killars?)

Actually he probably asked himself – why full frame and why 2:3 format. In certain terms, this wise man was Godfather of recent APS-C sensor size and Instagram square format.

So he made a compact camera with exposure box of 24x24mm (instead of FF – 24x36mm). Why? I’d love to know too, but I am afraid that Mr. Kilfitt took his secret into paradise. Either he simply liked square format or he wanted to get better use of film.

Big players of that time – Kodak and Agfa said go away. What a stupid idea. That was some 84 years ago, but where are those big players today?

There were however Mr. Heinrich Berning, a young man with a rich father, and he established Otto Berning company (Otto was the name of his father and main financier), that become famous by producing Robot cameras.

The main idea apart of square format, was to use mechanical winder for film transport. My Robot Star 50 has two winders and can expose 50 (24x24mm) shots in a row with a single spring stretch. No batteries, no electronics, no auto focus, image stabilization, and worst of all… no WiFi 🙂

I will stop this exciting story here, but if you got intrigued, I suggest you to search for Robot Cameras with Google, they were and still are magnificent devices. They were massively used in WWII by German army.

Now, lenses for Robot cameras are story for itself. They were produced mainly by Schneider Kreuznach and Zeiss, but originally it was Hugo Meyer in Görlitz who did I believe the first lens for Robot. One of the smallest lenses featuring aperture and focus control that I know and certainly smallest that I own.
Meyer Görlitz Primotar 3cm (30mm) f/3.5 (first on the left) It looks fairly small in comparison to its fallows here, but to put it even more into perspective, let me show you those lenses compared to very small native Sony E mount lens – Sony FE 35/2.8 Bellow are adapters needed for Sony E-mount.Looking at the image above, one have to ask – what it takes to make slightly slower, slightly wider and this much smaller lens than modern alternative.
It takes a lot, don’t worry.
1.
First of all, none of the above Robot lenses covers FF. But some gets close and all of them covers APS-C. With A7r, you have 4 possibilities to shot with those lenses:
a) on FF counting on PP cropping
b) on FF using Sony Lens Correction Application (7.99 EUR/USD) that can reduce vignetting a little and help with distortion and corners color casting as well as with CA.
c) in APS-C crop mode (with resulting image similar in size to recent Sony NEX 6 i.e.)
d) using Clear Image Zoom
while first 3 options are available for RAW, the last one is only for JPEG.

2.Only few Robot lenses were multicoated. Thus contrast wide open is usually quite low. But for few of us – low contrast is all we want 🙂
3.
A7r is extremely demanding camera for today standards, when it comes to lens performance especially in the corners. Smaller projection circle of Robot lenses makes spherical aberration more apparent and thus we can see smearing in the corners. But that is to be expected and in most situation where those lenses might be considered for use, such as street photography i.e., that wouldn’t matter at all.
4.
The world is getting crazy with legacy lenses those days. Prices are all over and it is hard to estimate reasonable deals. On top of that, there were quite some lenses made for Robot and as a result, there are huge sample variations. But most Robot lenses that I had chance to hold were made in brass barrels and they feel as solid as it gets.
5.
There is no AF, no IS, OSS, ISS or whatever S, no nano, turbo, meta coatings, no firmwares, no upgrades, no aperture control from camera.
So why should you even think of Robot lens?
If you are honest lens fetishist, incurable lens addict or anonymous lensoholic, you will understand why Robot lenses are one of the most desirable instruments made of brass and glass that we can plant on our cameras.
Blah, blah Viktor… Show as some pictures will you?
I’d love to, but weather is depressive. I can’t see myself outside, taking test shots under any circumstances (except if I see four elephants on the giant turtle carrying discworld, as Mr. Pratchett believes they does).
But I can show you few informal shots from my office.
However, please note that my home made test target is all but reliable. The foam board is curved, edges are bent, even wall is probably angled. Most importantly, lenses are focused close to their minimum focus distances, which is very demanding for most lenses.
All in all, consider those test images as indication about lens tendency, certainly not as absolute performance indicator.
If time allows me, I will add more Robot lenses in the future and more shots from the real (whatever it means) life.
Mysterious lens:
When I start to think that I know most of Robot lenses, it usually happen that I drop on the piece that none had ever heard about. Here is one again, and despite my best effort I couldn’t find any info about this lens.
Schneider Kreuznach Xenon 35/2
(It seems that lens was adapted for Robot cameras, and originally it was designed for some other device. Was it a movie camera (Robot did few of those too) or some special lens for industrial use, I have no idea. It also seems to be painted over with black.
Take a good look, maybe someone can recognize it… 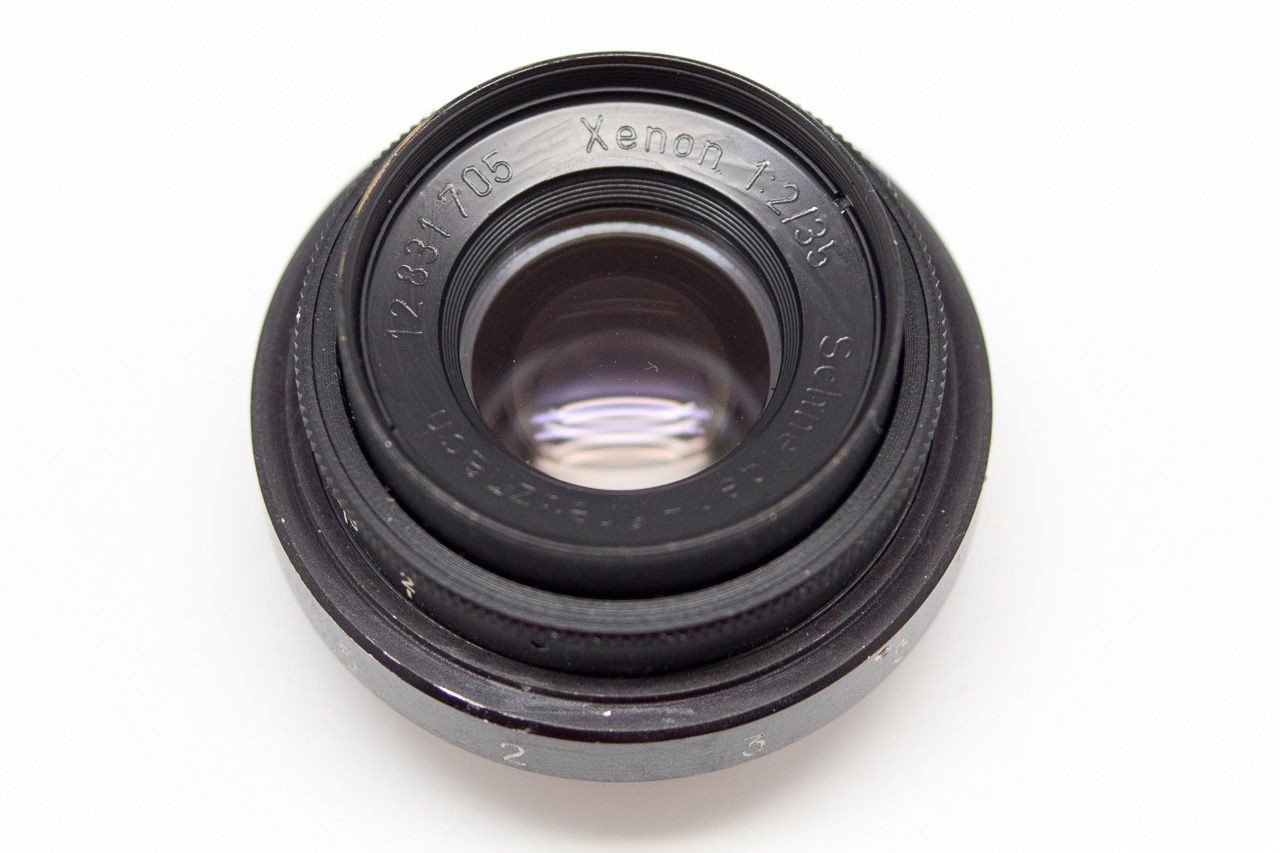 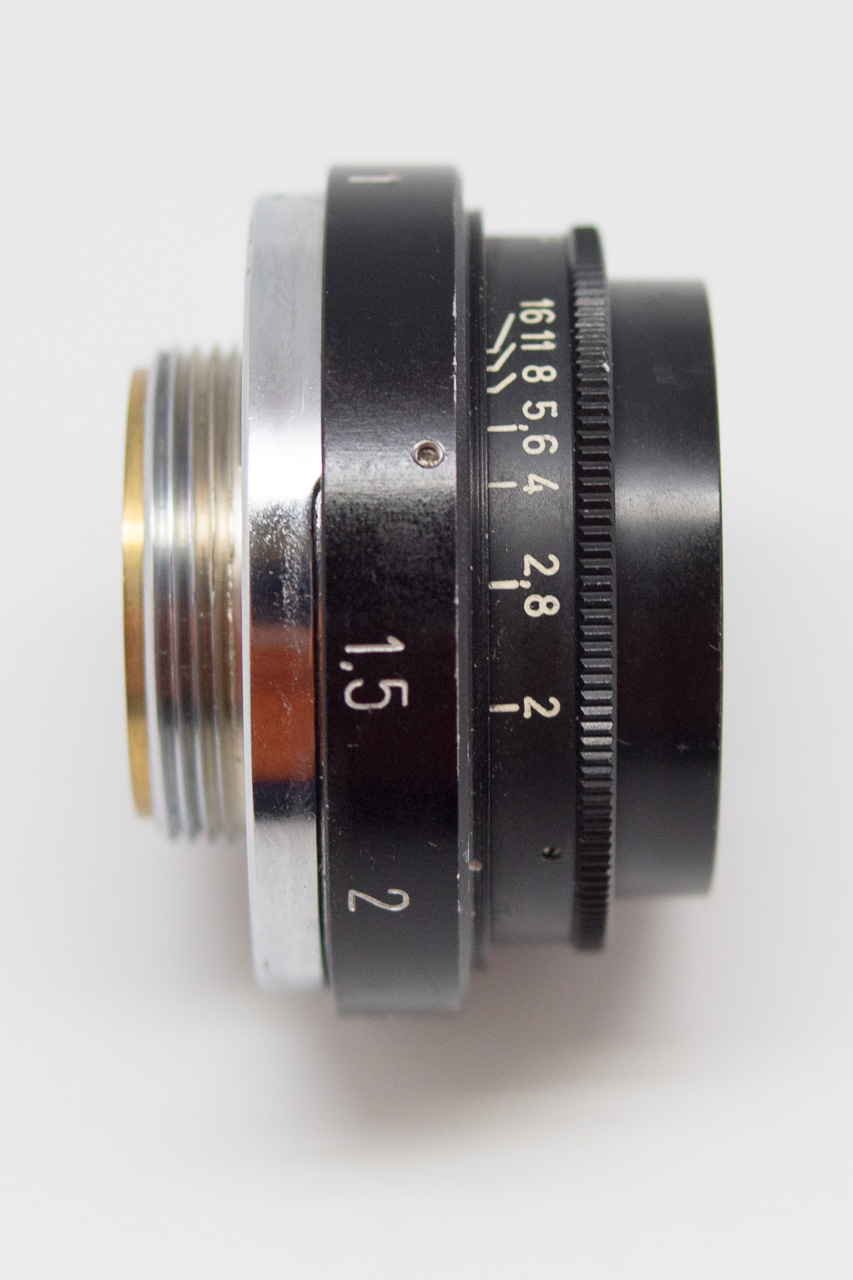 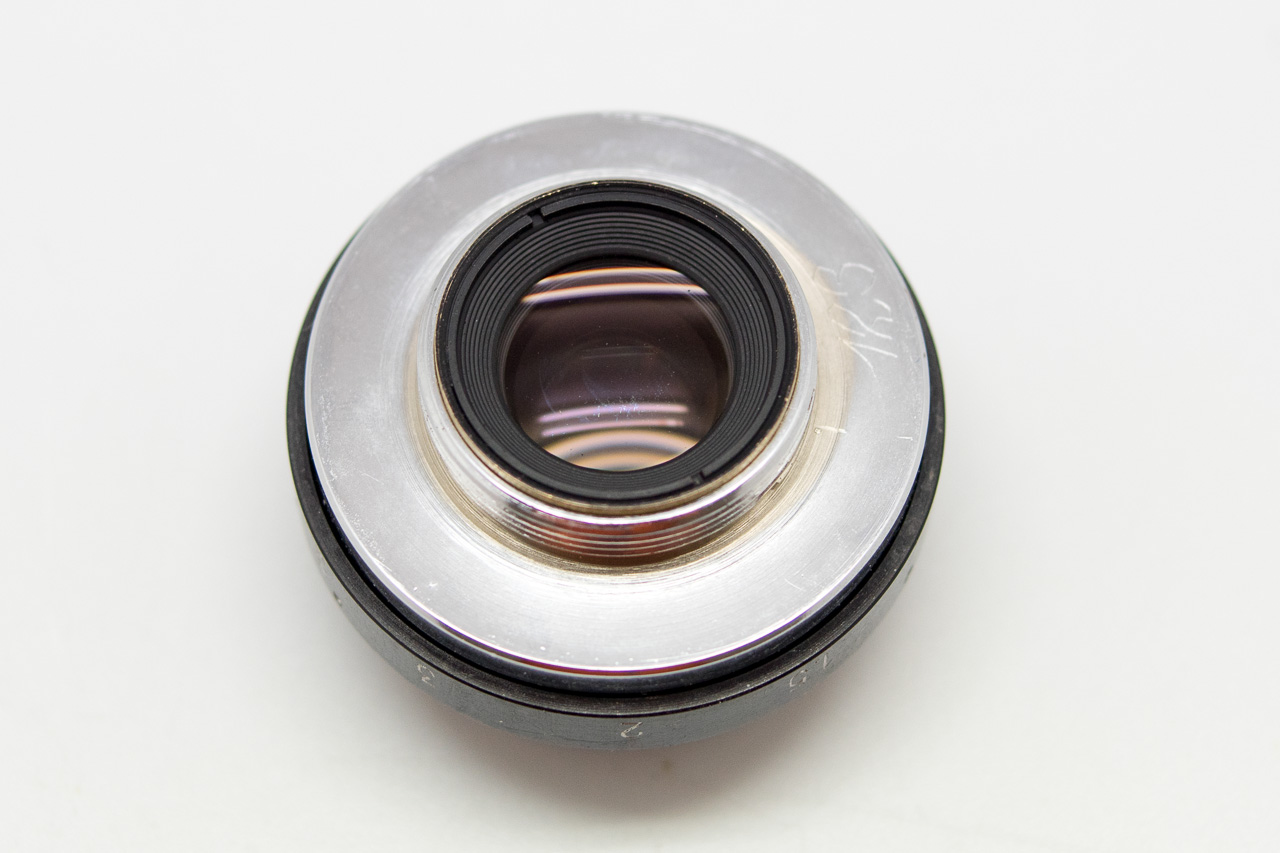 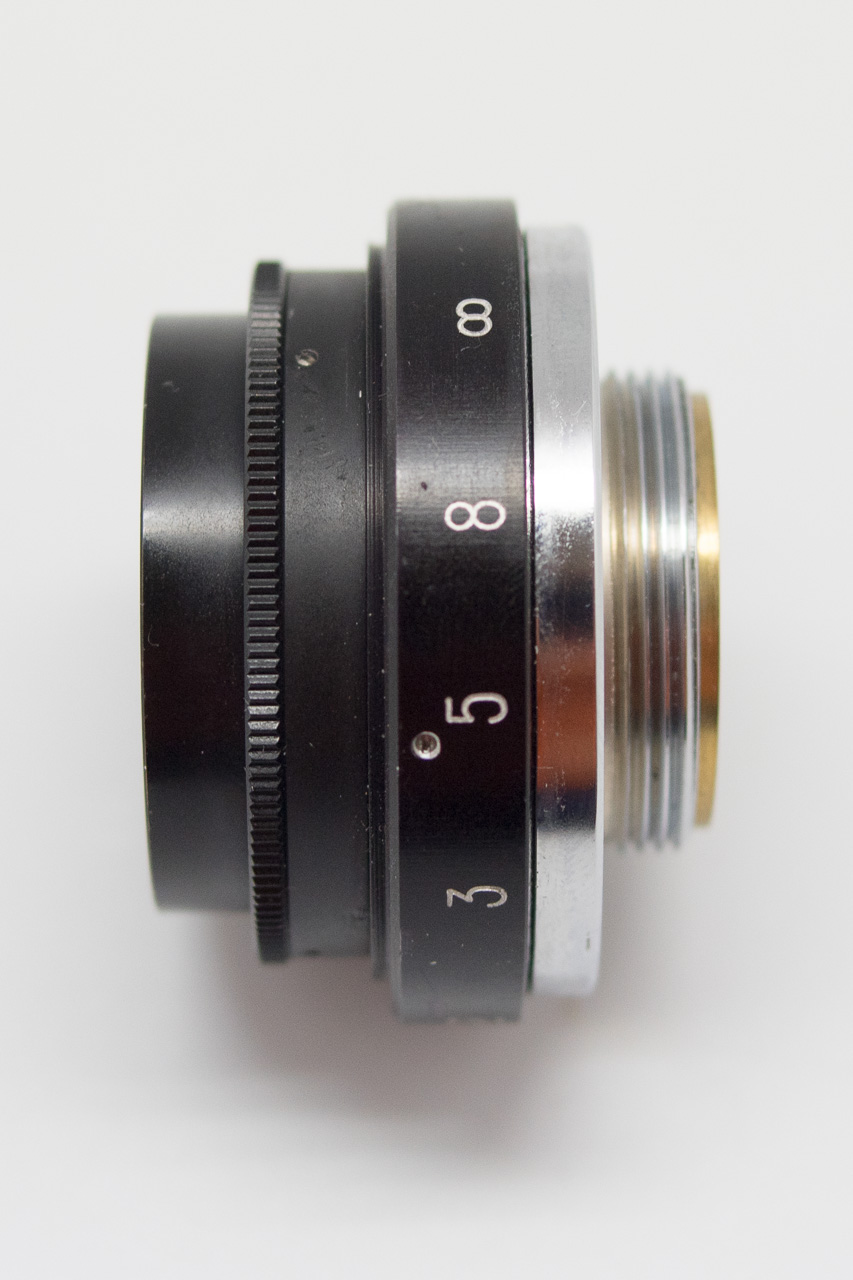 1. Here are shots of my improvised test chart with A7r, this Xenon 35/2 and using Lens correction application in camera. First – there is shot at f/5.6, followed with 100% crops from it and related shots at different apertures – wide open (f/2 in this case) and f/11. As you can see, Lens Correction Application can’t really help in this case. In all test shots, I was only trying to reduce vignetting and didn’t work with other application corrections.
Here are three 100% crops compositions from different area of the image above and related images (that you can find here) at apertures wide open (f/2), f/5.6 and f/11:
Center

I switched A7r to APS-C crop mode, to see results that should be similar to those on former NEX 16mpx sensor cameras. Note that center sharpness is same as above, so I didn’t crop it. I went instead with other areas.
Total at f/5.6 where you can see difference in FOV Here you can find other images from this set (total shots at f/2, f/5.6 and f/11 as well as images with Clear Image Zoom) with this combination.
Probably optically best lens from this bunch is the only multicoated lens – Schneider Kreuznach Xenon 40/1.9 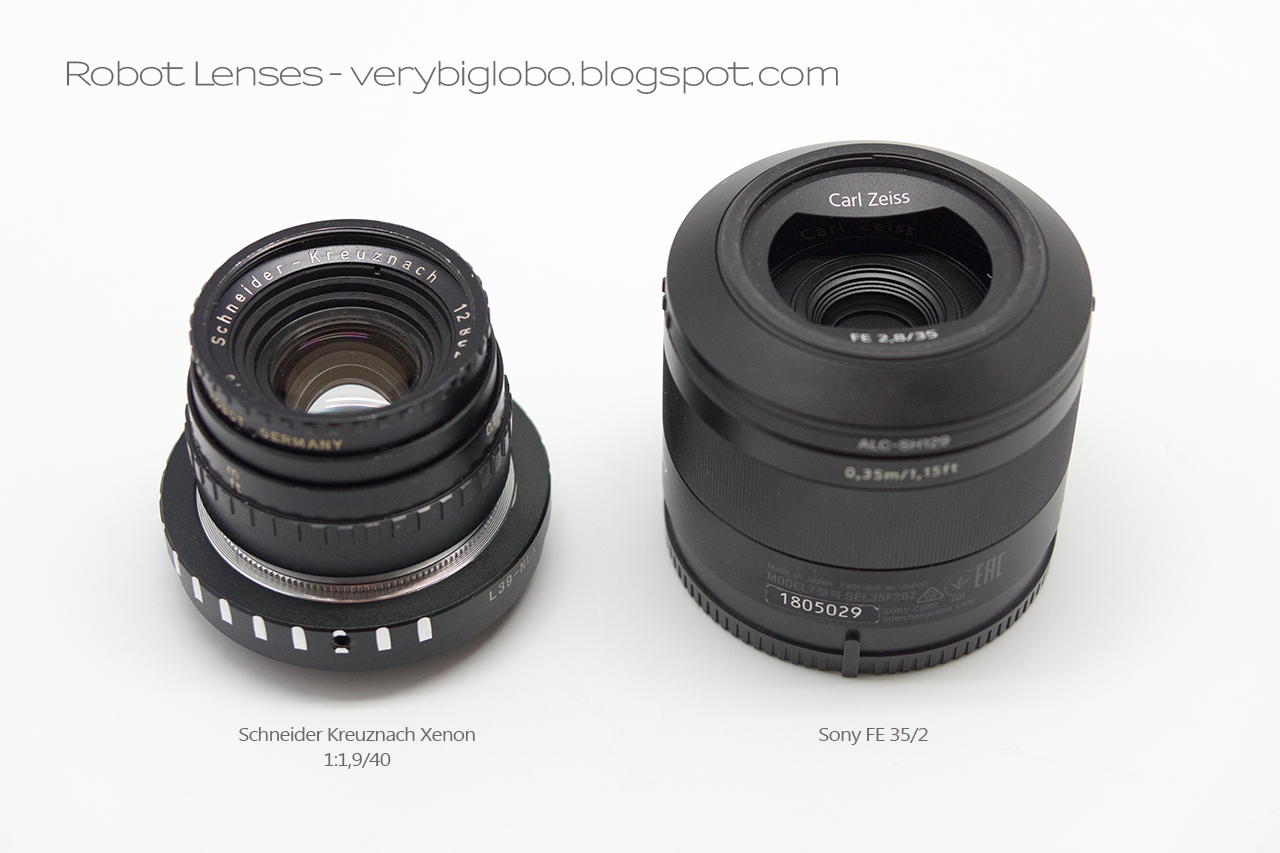 Again – three 100% crops compositions from different area of the image above and related images (that you can find here) at apertures wide open (f/2), f/5.6 and f/11:
Center

A7r in APS-C crop mode.
Total at f/5.6 where you can see difference in FOV You can find here other images from this set (total shots at f/1,9, f/5.6 and f/11 as well as images with Clear Image Zoom) with this combination.
For the other 2 lenses,you can look at their respective sets on Flickr –
Schneider Kreuznach Rodionar 38/3.5
and
MOG Primoplan 30/3,5
This article is a tribute to lenses made for Robot cameras and Robot concept itself.

Can they be used on A7/r? They certainly can and actually in any above described mode. If the excessive vignetting on FF matter, just crop it out. If low contrast matter, increase micro contrast and global contrast too.
One thing is for sure… Robot is a legend.
So, Viva la Robolution and let’s Robotize our Sony MILC cameras.

Please help support this page and upcomming reviews and buy through affiliate links, with no extra cost for you:
Buy on BHPhoto: Alpha a7 Mirrorless Digital Camera