This is meant to be another rolling review.I just received Metabones Speed Booster for Canon EF lenses on Sony NEX (E-mount). 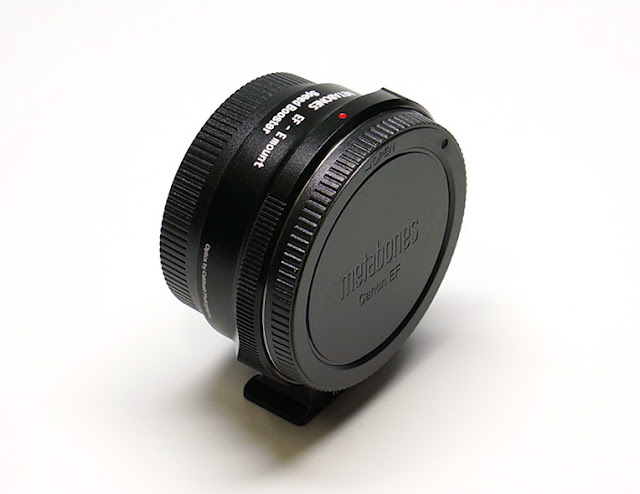 This piece of equipment caused quite some upheaval in the last few weeks, after the official announcement.

It won’t make much sense to write about the creators and technology behind, everything is described quite in detail (and what is not, is up on us to find out) in the official Metabones SB white pages here:

When I heard of it, first thing that comes to my mind, as an analogy to help me better understand the idea behind, was my Led Lenser focus torch. Here is the diagram from their pages – http://www.ledlenser.com/technology/advancedfocussystem, that kind of helped me to imagine, what is behind Speed Booster.

(BTW, those Led Lensers are really great lamps for photographers. I like to use them for light painting, either for macro or landscape).

So, as I can think of, the main idea is something like this…

Of course, correct position of projection plane is different, but if I understood correctly, this is basically it.
It doesn’t really matter how far I am from the proper technical description, the point that I want to make and that I will refer few times later is this…

If you have such a device, as Led Lanser focus led lamp, you know, that few things influence resulting light circle. (Projection circle in our case) One of the most important is the power of the lamp, the other is a distance from the projection plane (sensor), the third one is lens used in a lamp to focus the light rays, quality and color of the surface on which light is projected, etc.
The intensity and quality of the projected light is related to those values. (If you focus light to smaller circle, it becomes brighter – if you focus light that comes from the lens to the smaller projection circle, image will be brighter – more light will fall onto sensor.)

Creators of the “focus” optics used in Metabones Speed Booster were quite limited, mainly because of the “flange distance” between the lens and sensor.
Flange distance of the Canon EF lenses is 44mm, while distance of the E-mount is 18mm. Simple math says, there is 26mm of space, to come with a magic. Quite impressive achievement. (I am sure, there were many other mechanical limitations, that probably cost inventors many, many beers and RedBulls, that are now included in product price :-))

And finally, here is my main point – the idea presented above is not new. Several lens designers are taking similar route when forming the exit glass groups to form the final image projection. What is new about this idea, is to make – one glass for all lenses. This started to be possible with the appearance of the MILC, because their flange distances were much shorter than those in DSLR.

In that respect, it is a brilliant marketing idea, that actually works very well to certain extent in a real life.

But its limitations comes from its main strength – one design for all lenses. That is unfortunately not possible without some serious compromises…
(But who knows, with a development of the new glass elements with a high refractive indexes, I can imagine a “zoom speed booster” once to be possible. By moving the lens inside and involving other corrective optics, it might be possible to adjust at least the size of the projection circle. In theory.)

What Mr. Brian Coldwill from Caldwell Photographic Inc.and Wilfried Bittner from WB Design, (as listed on the official white pages) did also very well, is that they thought carefully about which lenses should have been considered as the most important ones.

I can’t speak for them, but from my first impression, (and form the merit of the lens design) Speed Booster is very welcomed addition for the WA and to some extent UWA focal lengths. The price to be paid, is that Speed Booster (EF -Emount) involves significant vignetting, when used with medium and longer telephoto lenses.

I haven’t done nearly enough tests to be sure, but so far, it seems that somewhere behind 70mm, heavy vignetting starts to appear in the extreme corners.
What I did briefly test already, is that Canon EF 50 f1.2L USM does not “hard vignette” in the corners, while Canon EF 135 f2L visibly does.

But as I wrote above, both gentlemen know, that there is very few reasons, why anyone would like to use Speed Booster with longer focal lengths. Actually, there is only one, that I can think off – more light will allow for higher shutter speeds. This can be welcomed by BIF or sport shooters, but even more welcomed for them is usually higher magnification, achieved with a regular Metabones smart adapter i.e. that uses 1,5x crop in its benefit.
BIF shooters are used to crop their images, so for them it shouldn’t be a problem to use Speed Booster, if they need higher speed more, than longer reach.

OK. Let’s see what I got today for almost 700 USD (including shipping and custom tax).

The box that Metabones speed booster comes in is significantly bigger, than the one in which my “old” Metabones Smart adapter did come in.

When I unpacked the box, I started to laugh. Working in advertising all my life, I can imagine the meeting where designers and marketers sits, and talked about the packaging.

FOLLOWING TEXT IS A PURE FICTION, AND IT HAS NOTHING TO DO WITH REALITY!!!!

“Guys, this is going to be almost twice as expensive as our regular “Smart adapter”.
“But there is that magic piece of glass in it, and all those R&D behind”.
“Nah. Customers don’t care about R&D, and the glass is transparent, almost invisible. We need to give them something more… something… bigger…”
“How’s about giving them bigger box?”
“Fabulous idea, we have it!”
(Few days later, secretary probably noticed, that shipping will be more expensive, but she was silenced by her boss. “We all have to make some compromises. You will stay over weekend i.e.”)

Here is a little – unpacking video, for those who like such things.

As you can see, there is lot of foam, the product itself and a little wrench. The wrench can be used for removing tripod extension, but as it will show sooner than I would like, a little screwdriver would be more appreciated.
There is no instruction manual in the box. (Maybe it couldn’t fit there :-))
If you want (and you should) learning about two modes in which adapter works, you should read the manual here – Smart Adapter II and Speed Booster Instruction manual

So, while the box is bigger, the adapter itself looks smaller, than the original Metabones Smart one. Here are both, side by side.

As with all my Metabones adapters (I have also Leica M to NEX and Contax G to NEX), everything looks really solid and well made. But…

My first Metabones Smart adapter, had one serious flaw. It couldn’t focus to infinity with two of my Canon EF lenses, that I actually inetended to use the most with it. Zeiss Distagon T*, 21mm f2.8 ZE and Canon EF 24 f1.4 L II USM.
I had the option to send it back to Metabones, but that would mean, extra cost for shipping (insured is over 60 USD from my place), and quite a tough procedure with a custom tax intellectuals, if I don’t want to pay some 30% extra taxes again.)
So, I sold the adapter to the guy who hadn’t have those two lenses with some minor loss, and ordered new one from Metabones.
That second adapter was spot on, even If I would probably prefer slight reserve on the infinity mark.
So, when I received my Speed Booster, the first thing I tried was infinity with those two lenses. Damn, it happened again…

Here is Zeiss, focused to infinity.

As you can see, it’s failing by a margin here. Canon EF 24 f1.4 L II USM was somewhat better (closer to infinity) but still not there.

I wrote immediately to Metabones, (not very happy that I had), and the reply (that come almost instantly from Mark) left me with some hope. Metabones Speed Booster is their first “Smart Adapter that allow the user to adjust it for the infinity focus problems”.

Mark sent me this link, where it is all described in detail – http://www.metabones.com/smart-adapter-operation-manual/155-infinity-adjustment-speed-booster-only

I still have to try it, but there is a hope, and smart move from the “smart” adapter producer. If it works of course.

Still…here is what they say…
“Your Speed Booster™ is meticulously fine-tuned with specialized test equipment at the factory to be able to focus to infinity for every combination of lens and camera body, and also to ensure optimal optical quality with CRC or floating-element lenses. No adjustments are necessary. Some older lenses which are out of tune due to age and some lower quality optics may not be able to focus to infinity with Speed Booster™. It is possible to adjust Speed Booster™ to allow for infinity focus for these lenses. Remember, however, that “if it ain’t broke, don’t fix it.” Do not attempt adjustment except as a last resort.”
If Zeiss Distagon T* 21 f2.8 ZE and Canon EF 24 f1.4 L II USM are “older” or “lower quality optics”, than I am afraid, there will be little use for this adapter. And it is not first time it happen with those two lenses, that are both listed on Metabones pages as fully compatible. QC issue? I don’t know, but if you have one of those lenses, it is good idea to ask Metabones to check the adapter and adjust if necessary prior to dispatch.
At this point, I would appreciate that little philips screwdriver, instead of the wrench.I will have to try my luck, and will certainly let you know how it ended.

I know, that Image Quality is the most important, but as I wrote in the introduction, this is rolling review. To discuss image quality, I will need to test many lenses separately and I will make separate blogs for each.

In this introductory post, I would like to end with the AF performance.  Metabones itself, doesn’t build their communication around AF, but they keep mentioning it, and to be fair, they say, it is rather gimmick and will not work with moving subjects.

I can only confirm that. Here is short video, where I tried to show you and measure time, needed to focus on the quite contrast subject, in a rather good light. I used Canon EF 50 f1.2 L lens, that is not a speed daemon, but is still real USM lens.

So, in reality, AF is not something that I would use often. If ever… YMMV though.

In the next post, I will show some samples with Canon TS-E 17 f4 lens and comparison between Canon 5D MII and NEX 7 + Metabones SB, with it.