Today it was a ZOO day. First of three that I am planning for this test.I was a bit afraid, that once the guard spots me with 3 cameras hanged around my body (and fourth in the pocket), I might easily end, sharing my apartment with monkeys.

Today, one question come to my mind. Why people love to shot animals in the ZOO?
If you want to see practically any existing (and even non existing) animal, use Google picture search and voilá.

Besides pro photographers that have assignment, or selling their pictures to image banks, I believe, that most of us amateurs, just like to be a hunters. We believes (prior to reviewing our pictures on the screen), that we might catch some magic moment, such as a baby gorilla and his/her mother playing together, or in a better case, brake-out leopard, running around and scaring the hell out of visitors.
Also, there is plenty of colors and so many great looking models.

However, problem with animals (and trust me I know that, as I had been directing over 20 TV ads with cats, dogs, chimps, horses etc…), is that they don’t care about photographers. I can understand that. Obviously they are  not even paid for it, and imagine yourself in a prison walking around, while a bunch of donkeys, shout on you and laugh, not giving you at least a glass of a beer.

Therefore, it is a good idea to take a decent zoom lens with you, as there is higher probability, that you will capture some interesting moment from a distance, and it will also enable you to separate your subject from the unattractive background.
It is also a good idea to use as fast zoom lens as you can, because if there is an action, your models will be often very fast. (Unless you are after reptiles.) High shutter speed is your friend.
It is definitely not a good idea to take three cameras with a kit lenses and fourth that usually shot what it wants, despite my set-up efforts.

That brought me to the point of this test… What I was expecting to find out, by visiting ZOO? (Beside some winning lottery ticket, that I always expect, but never found.)
Well, main question awaiting for the answer is – which camera would I like to take with me, when I go to the ZOO with my kids, who loves to run around, tear my jacket, ask for ice-cream or popcorn, and has interest for everything, except animals and photography?

So, the task was simple – make myself feel uncomfortable (four cameras did that 100%), always search for something in the pockets (lens caps), be in permanent stress and rush, never stay at one place more than 5 minutes (usually it is less than a minute), forget about composing or waiting for the light, look happy (otherwise, my youngest might start crying), and most of all, forget about making any decent photo.

To make my life a bit easier, I preset the cameras, at best I was able to, while driving to the ZOO. (Well, only when there was red light.)
I made following settings (more or less): Shutter priority mode, Auto ISO, RAW/Fine JPEG, maximum size (I did expect to crop quite a bit with a kit lenses), tracking AF, high speed drive mode, partial metering, standard picture styles, sharpening, contrast and noise reduction, where possible.

My first stop were seals. I was so proud that I prepared everything in advance, looking at fellow amateurs who were trying to focus on a fast swimming seals bellow the water. So proud, that I forgot to check my shutter speeds, that for some reason, only Murphy knows, were set at 1/30s.
So, no seals today. (Some master biologists should probably be able to identify the breed, but no way he can do the same with a genre. You got the point, right?)

Second stop was a sleepy vulture in the grid aviary, who looked exactly as I wish to look when tax officer comes in control. 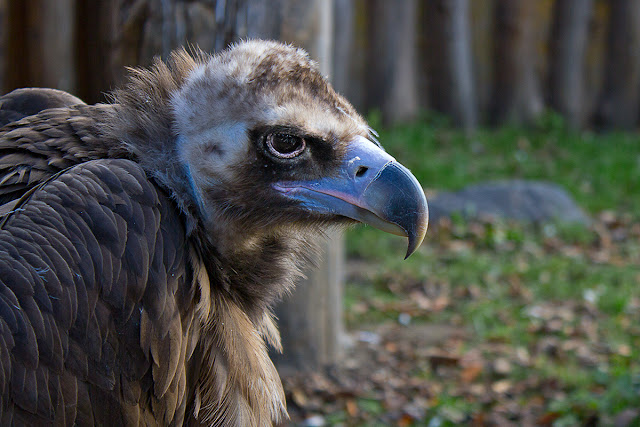 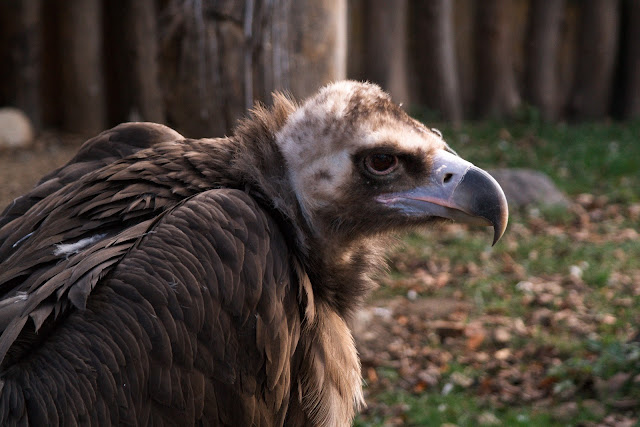 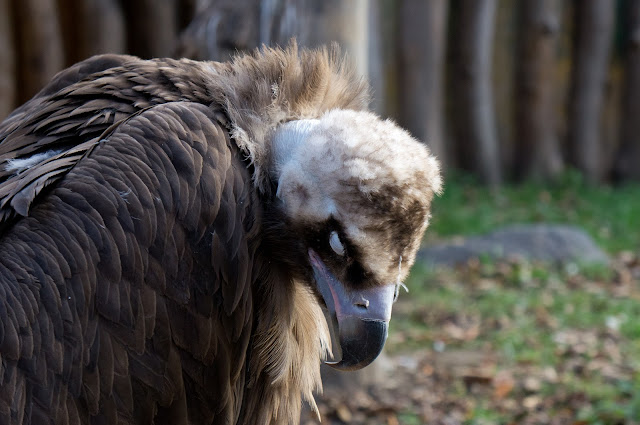 Vulture was very cooperative. I was probably looking as a potential customer, so he stay ready, just in case. Thank you vulture, sorry to disappoint you.
In this situation I had to push my lens through the grid, and easiest to do so, was with a Casio. For a normal size print or web, result from Casio is quite OK. Sony is very sharp, but half a meter from my eyes I didn’t see nothing on the LCD, and had to fire blind. Almost the same was with Canon switched to live view and contrast detection AF. Samsung AMOLED screen, was the only one I was able to read and compose according. But the result is rather soft. All files (except for Casio) were converted from RAW and post processed. I could put more sharpening for Samsung, but at the pixel level it just start to show blotchy artifacts. Samsung choose ISO 1600 at 1/320s and f5.6. I could reduce the shutter speed, but forgot to do so. Sony however at the same shutter speed, f-stop and focal length (55mm, BTW) measured 1000 ISO. Casio was at 800 ISO and 1/200s at f5.8, while I forgot to switch Canon to auto ISO so it ended up with 1/100s at 5.6 and ISO 100. I had to push exposure at +1.05 and fill light at +40, but it ends-up good.

Next stop – flamingo.
Many people likes to shot flamingos because of amazing color, but in my opinion, it almost always look better when composed with a shallower DOF and a longer tele, as you can isolate one or couple from their fellows. 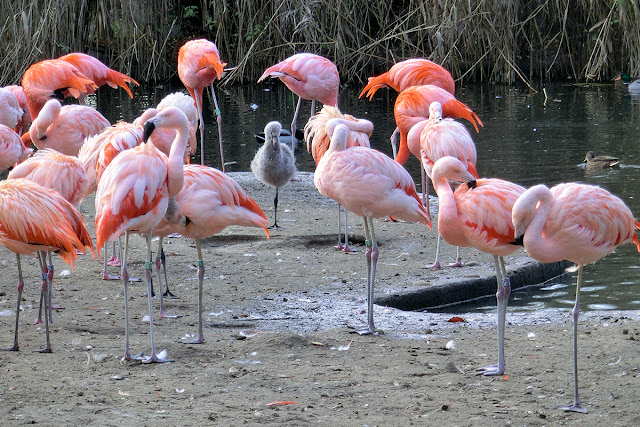 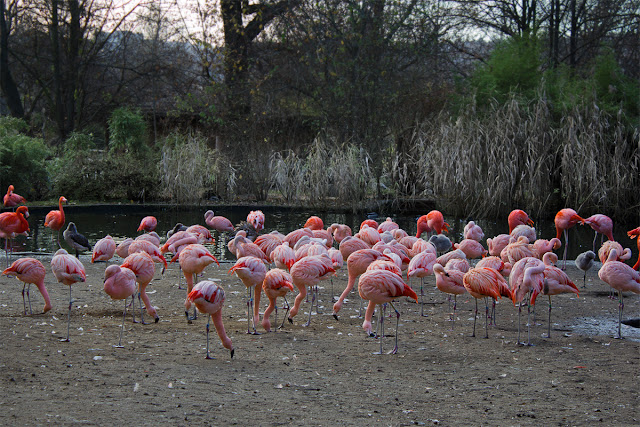 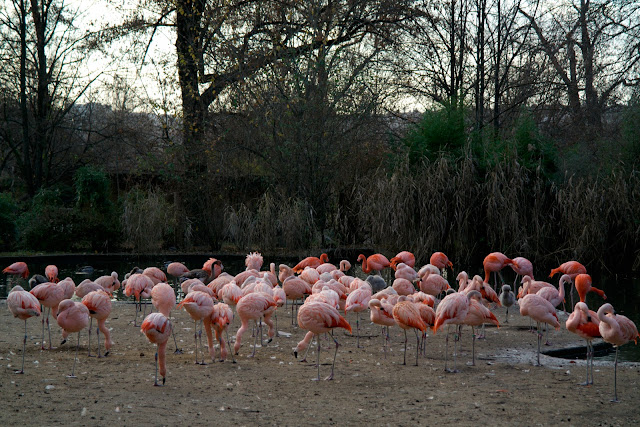 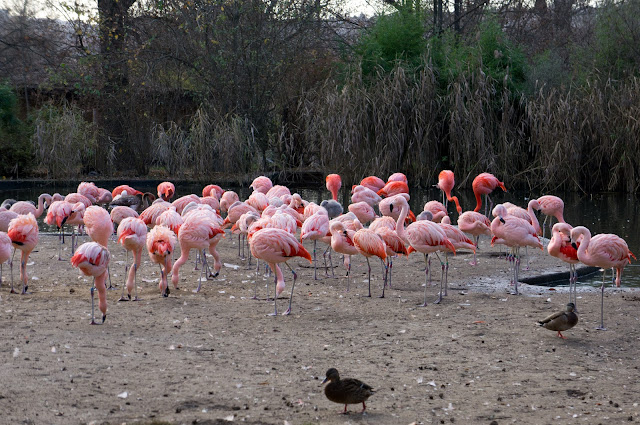