In between all those lens and camera testing, I thought it might be a good idea, to write a little about interesting shooting experience.

To start, here is a little story of the most curious wedding that I ever attended.

Few days ago I got info from my friend and great street photographer – Petr, that homeless couple is going to get married today in the local wedding hall.

Unfortunately, I mixed the date and when Petr called me to ask if I am coming, it was already very late. I didn’t have time to prepare at all, so I just grabbed first camera body that was on table, two extra batteries, memory cards and put all that in my camera bag.

Driving to the location, I tried to clarify in my head – what and why am I going to shot there…

Shooting usual wedding as a main photographer is stressful, but it is kind of fun for a friend with camera, who is trying to capture some interesting looking guests, drunk friends, funny interactions etc.

Facing however wedding of a homeless couple is problematic from an ethical point of view IMHO.

There is something fascinating about people who failed, who ended on the street, who are poor, sick, often hungry. We can either look at them as at drug addicts, alcoholics, mentally retarded persons, or we can look at them as at cautionary tale, sad heroes of the sad story that can happen to us, but somehow still didn’t. There are many other perspectives to think about them, they can also be seen as a rebels fighting against system, cynics who shit on regulations, pirates of the street who want to be free.

Whatever perspective we take, we often forget to look at them as at individuals, as at people who are not that much different from us and who ended on the street for the bunch of different reasons.

As a photographer, I feel responsibility not to feed cheap sensation. I grown up from times when I tried to capture those people secretly, admiring at home my idiocy of being brave to shot a sick or drunk stranger, with a 300mm lens. There is nothing appealing in that, quite in contrary. If there is anything under paparazzi honor, it would be it – shooting homeless, just to show losers, to the other bunch of ignorant on the Facebook.

On the other hand, it will be pathetic and dishonest to try to document wedding like this without certain dose of insight, detached point of view and forcing false respect.

They are what they are, and I should be what I am. Being sarcastic, invidious, envy misanthrope, I am actually proud of it, so it should make me emotionally positive person at the end…

I got late to the wedding, just to see the end of the ceremony, when priest blesses young couple on their joint way through the life. Note nice tattoo and wedding ring on the grooms left hand. 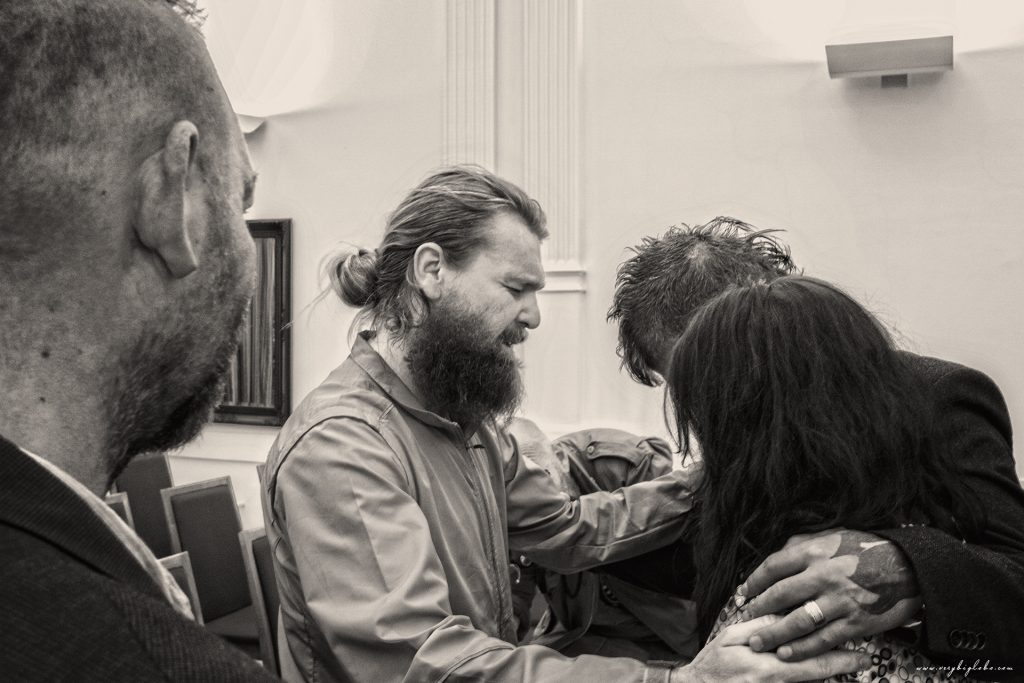 There were only few attendants on this wedding, Romana and Milan (bride and groom), his best men, her bridesmaid, one friend, priest, and three photographers 🙂 When they walked out, police car accidentally stopped just in front of us, for completely different reason, but best man reacted instantly: “We just ordered Taxi to take you on the honey moon!” he said and small group started to laugh out loudly. 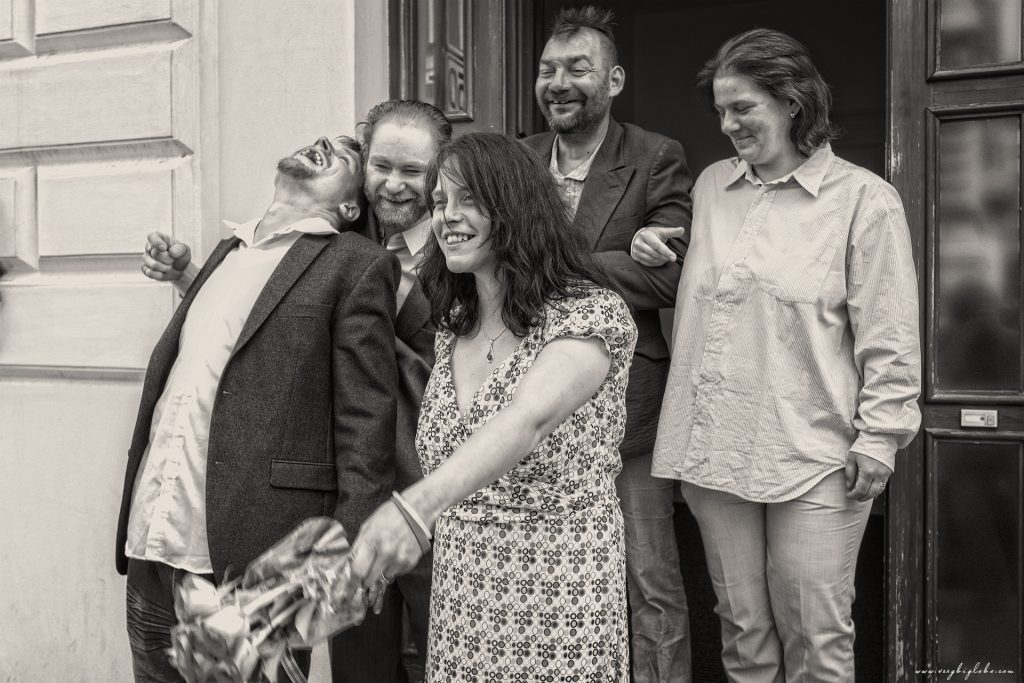 Staying there for a while, I noticed that either alcohol starts to evaporate from grooms mind, or it started in contrary to take control, because he suddenly become very serious. 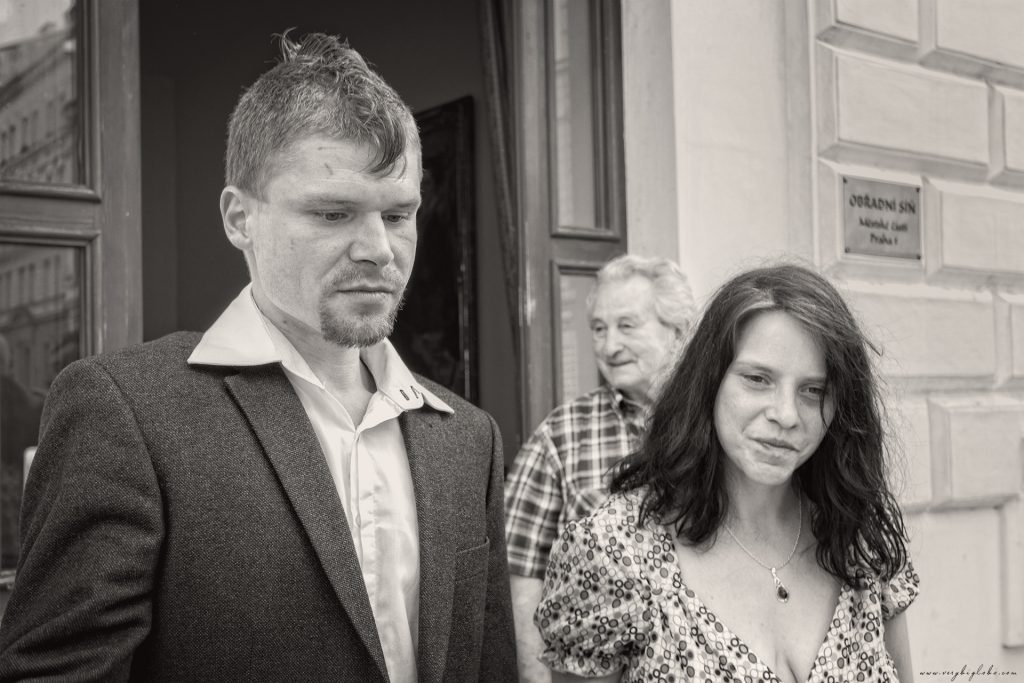 Wedding guests were dressed best they could, getting most of the wardrobe from charity organization. Some of them had long sleeves, other short pants, but bride had very nice casual dress and small bucket of roses. Nearby around the corner, they left all their property, closely guarded by another friend. Their property consists of backpacks and two dogs. Not much you might say, but it’s essential for their living. Dogs were very happy to see them coming back! 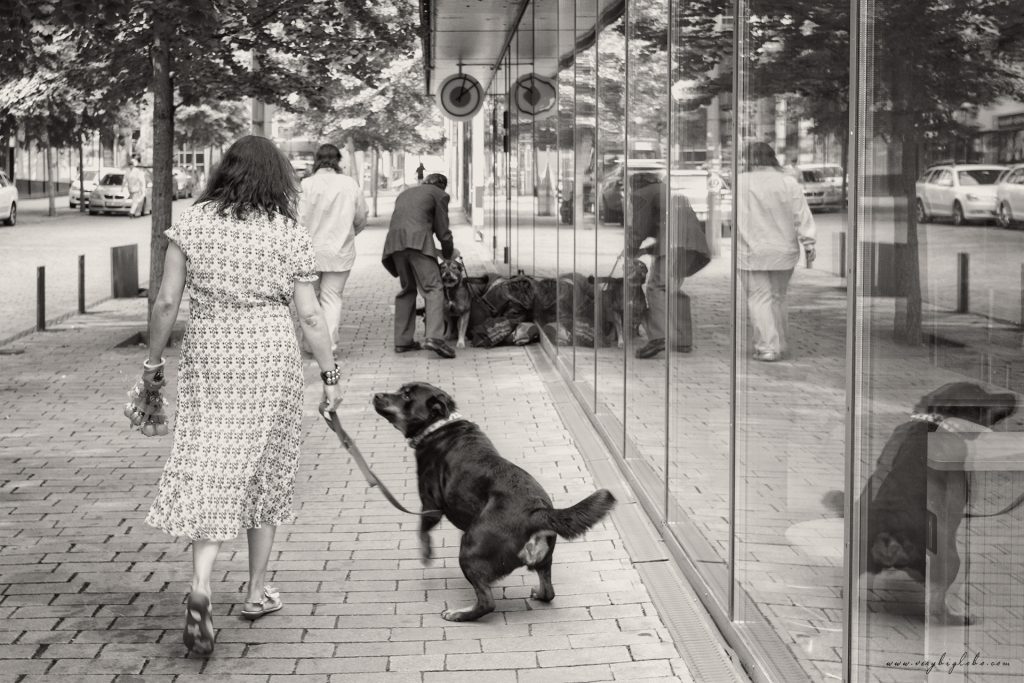 It’s time to celebrate! Bottle of rum was just opened. 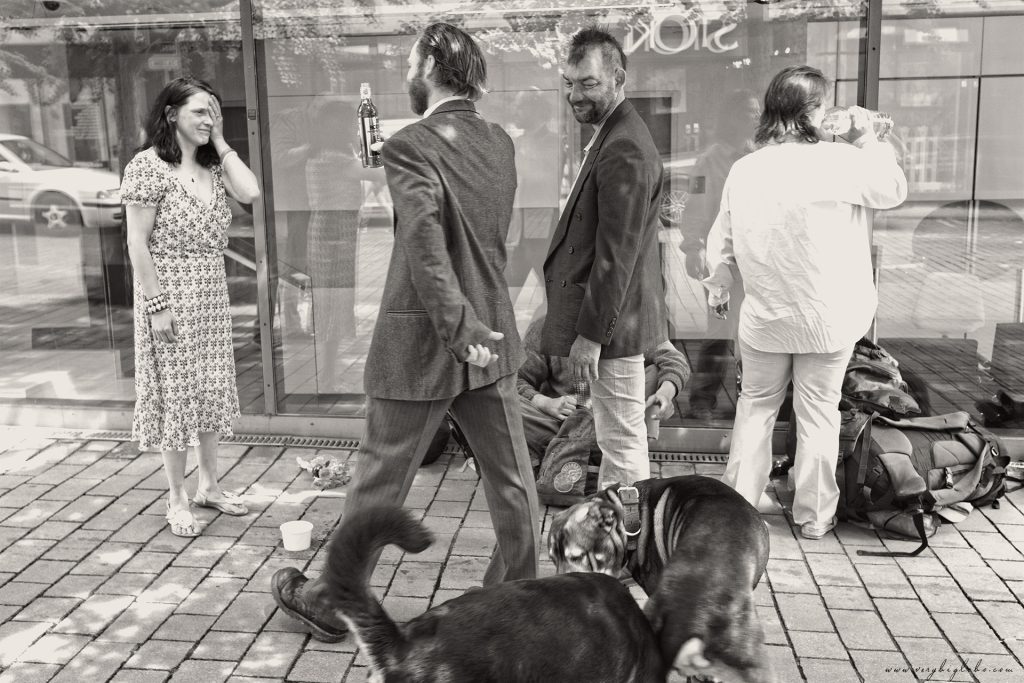 Bride was offering rum to all three of us photographers, but only one – Kevin was brave enough to share a sip from that bottle. 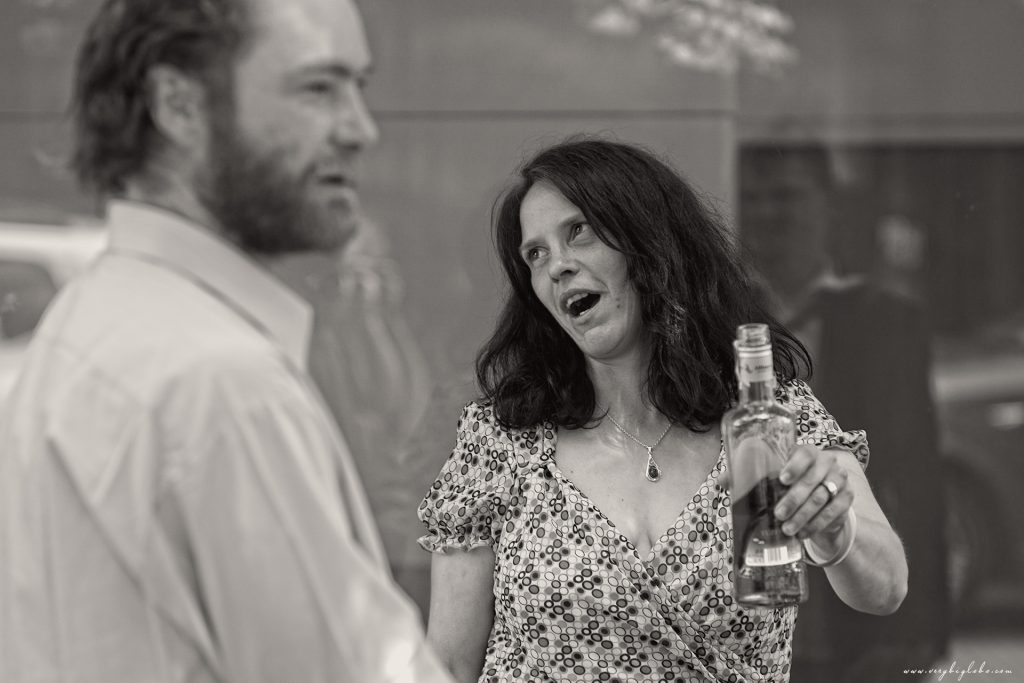 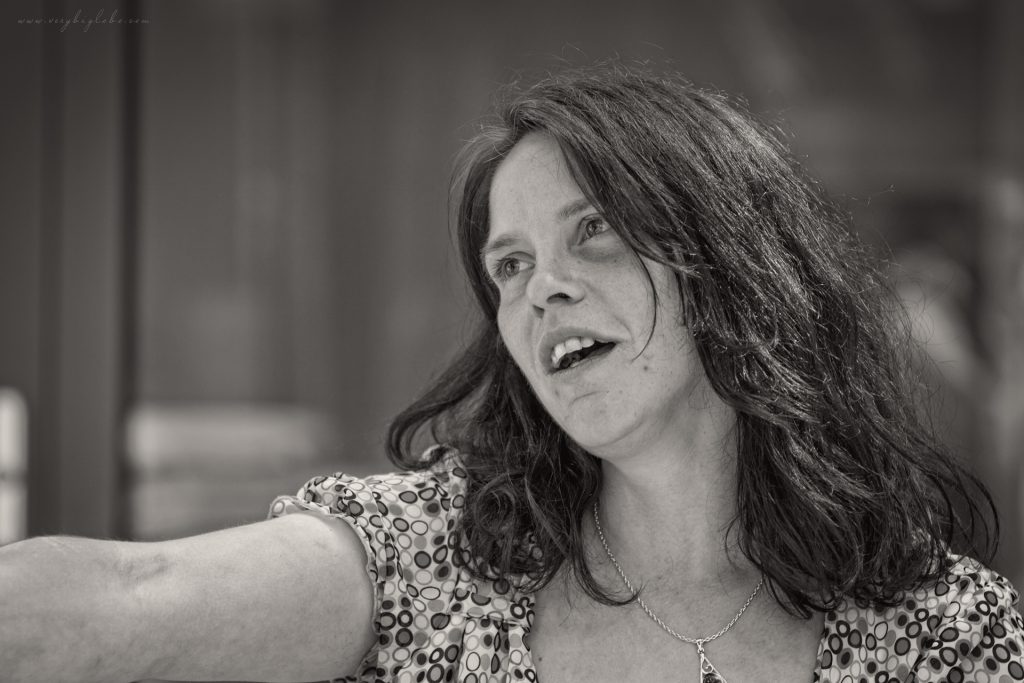 Other guests were accepting willingly of course. 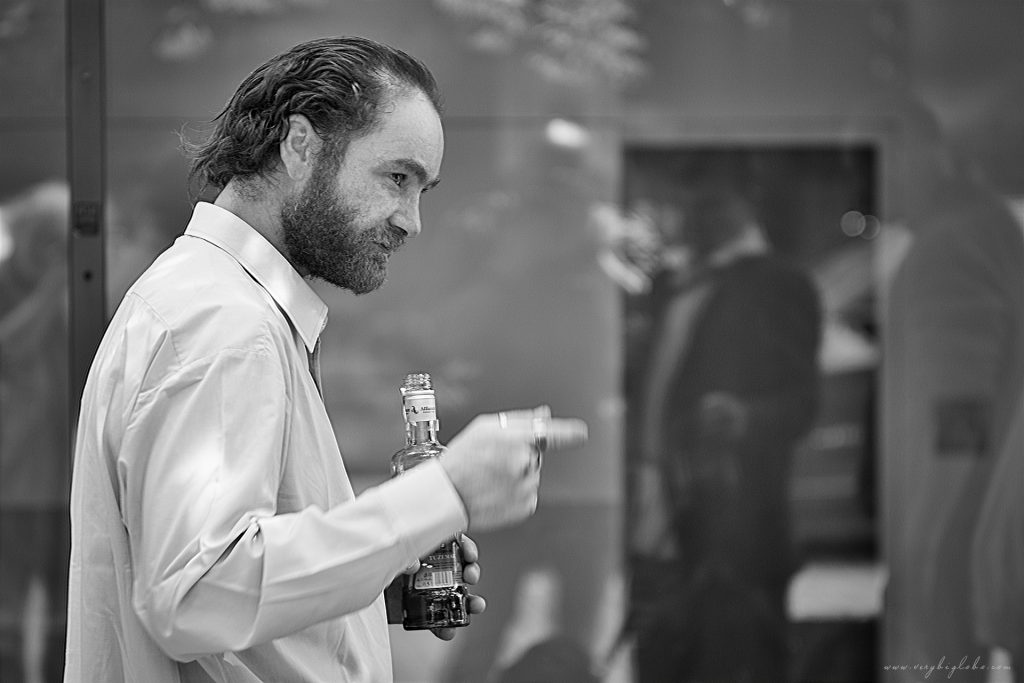 One of the guys started to play on the harmonica and he played very nice. 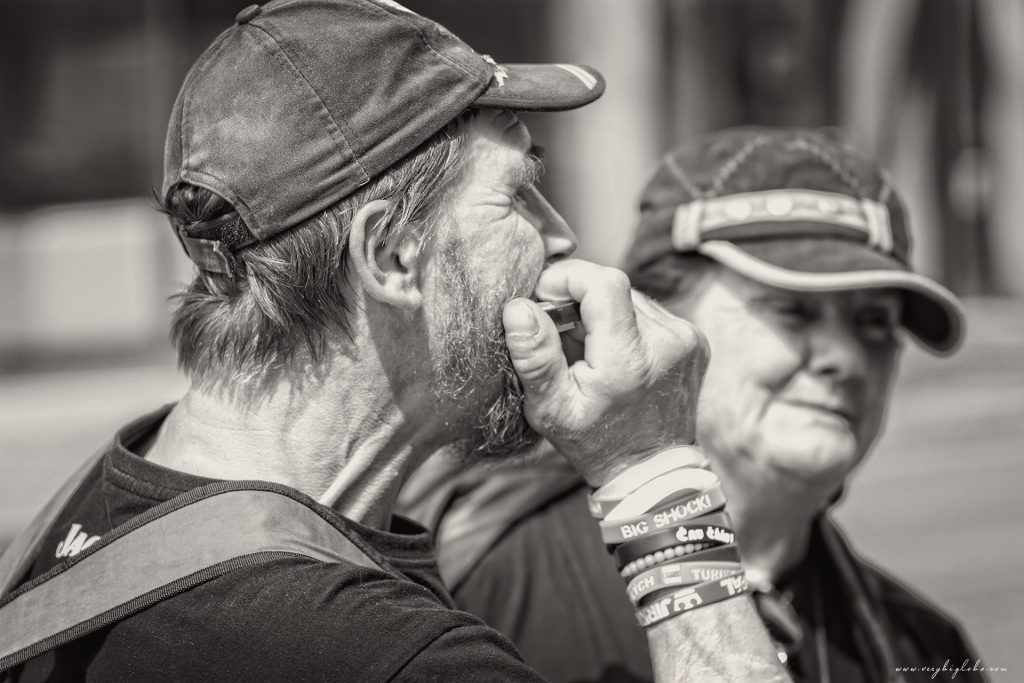 It was actually very pleasing atmosphere and if I may add, it was revealing to see people interacting without any affectation. No need for dress code, no sitting order, no gossips nor expensive gifts. For what it worth, I would use the word – joy – as simple and as honest, as it only can be. 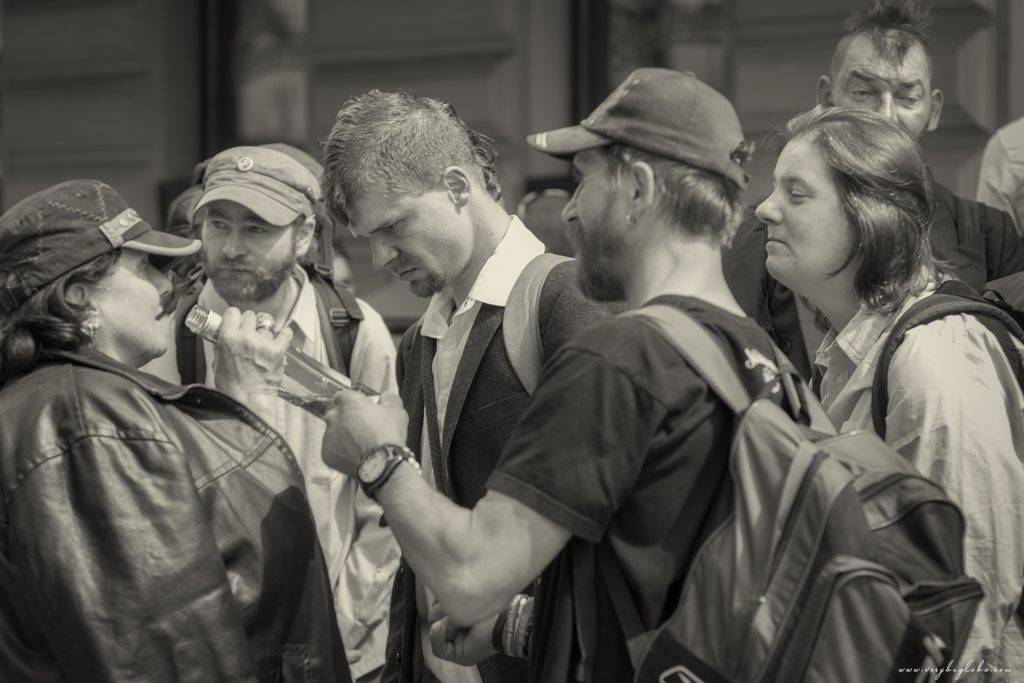 There wasn’t problem to share one bottle, nor to share kisses with dog and groom. Best man is the one who should ensure good mood! 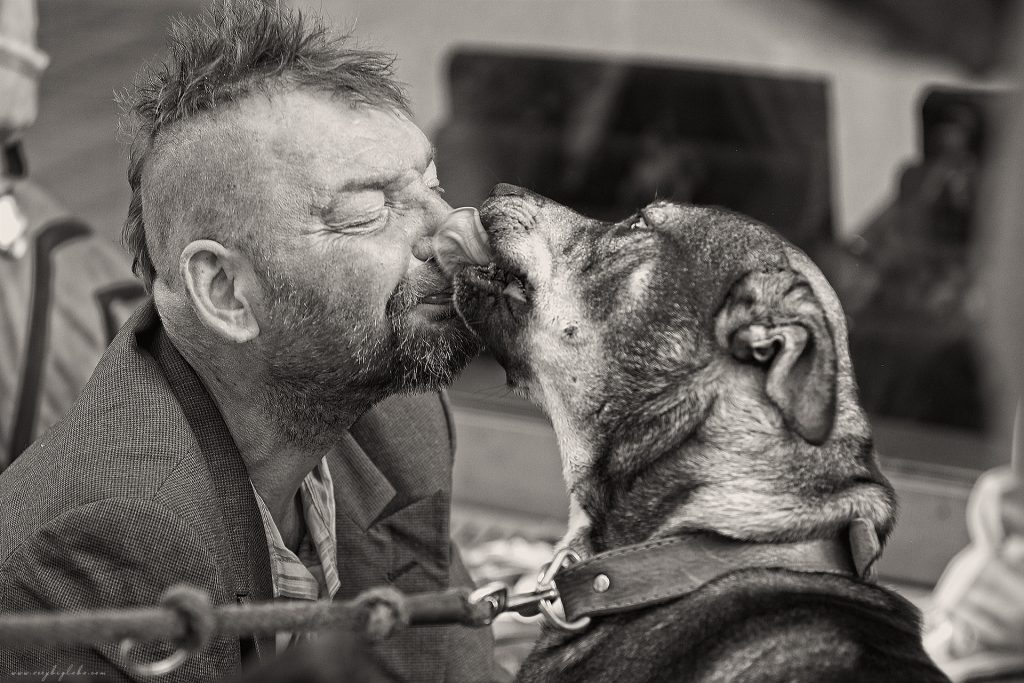 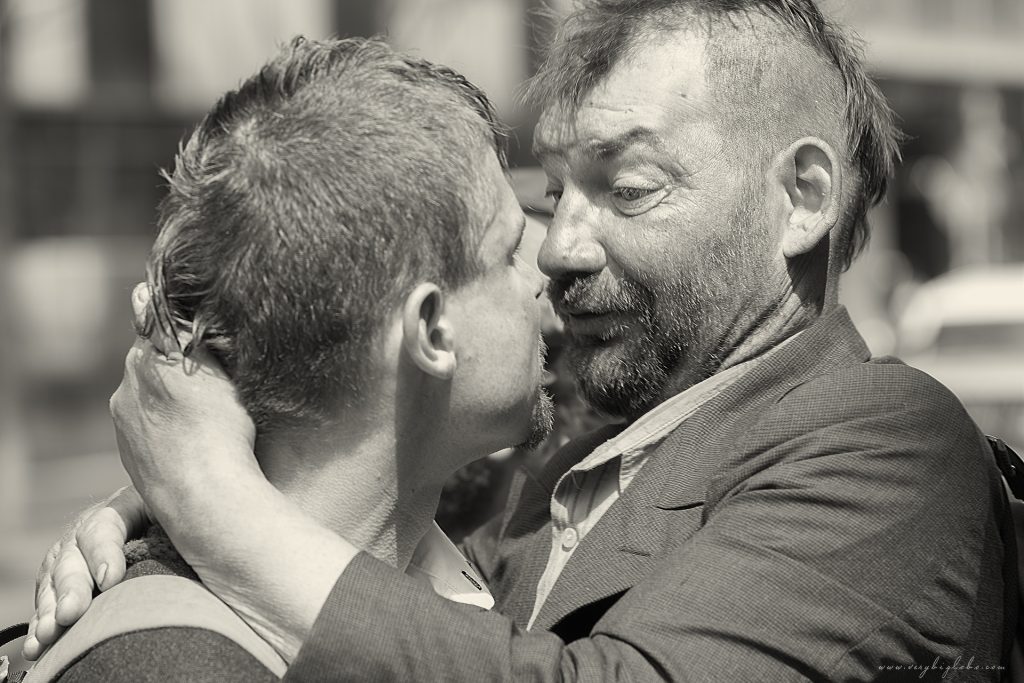 Groom gets very “tired” quite soon. I heard bride when she whispered to her husband – “Now, I am only yours” she said. He was too drunk to understand the importance of that sentence, but he got the kiss anyway. 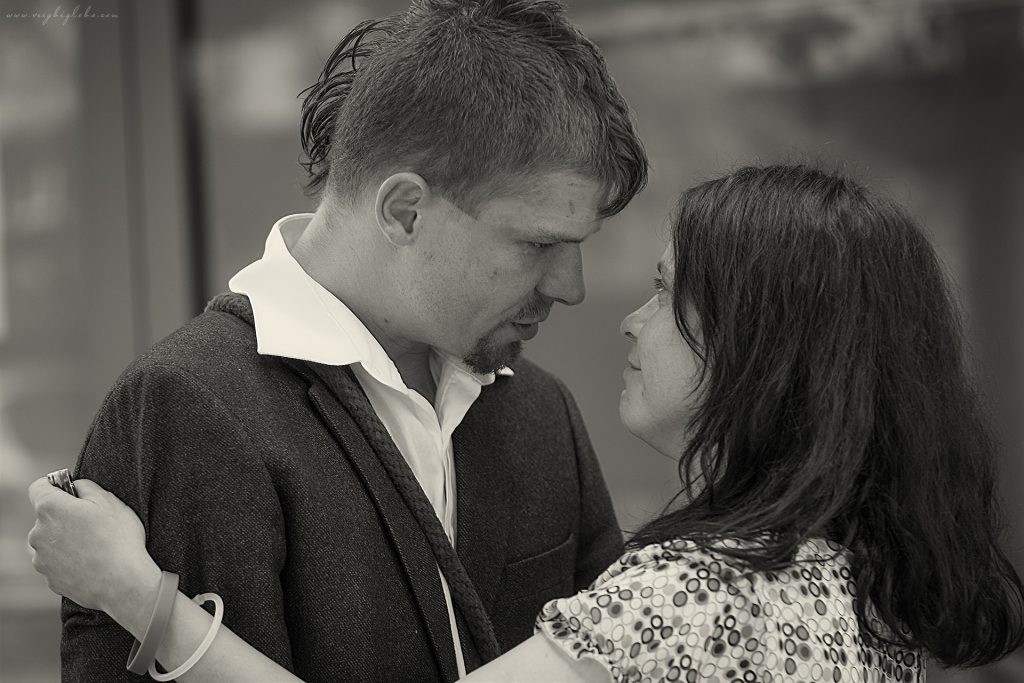 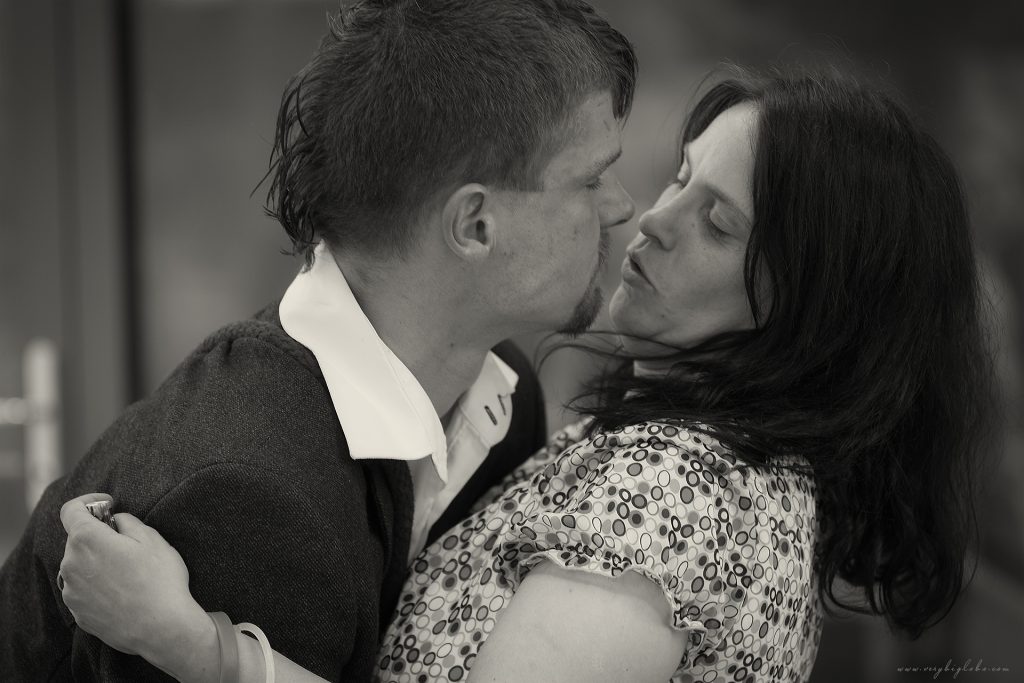 Later, they proudly shown the wedding document to everyone who passed around. 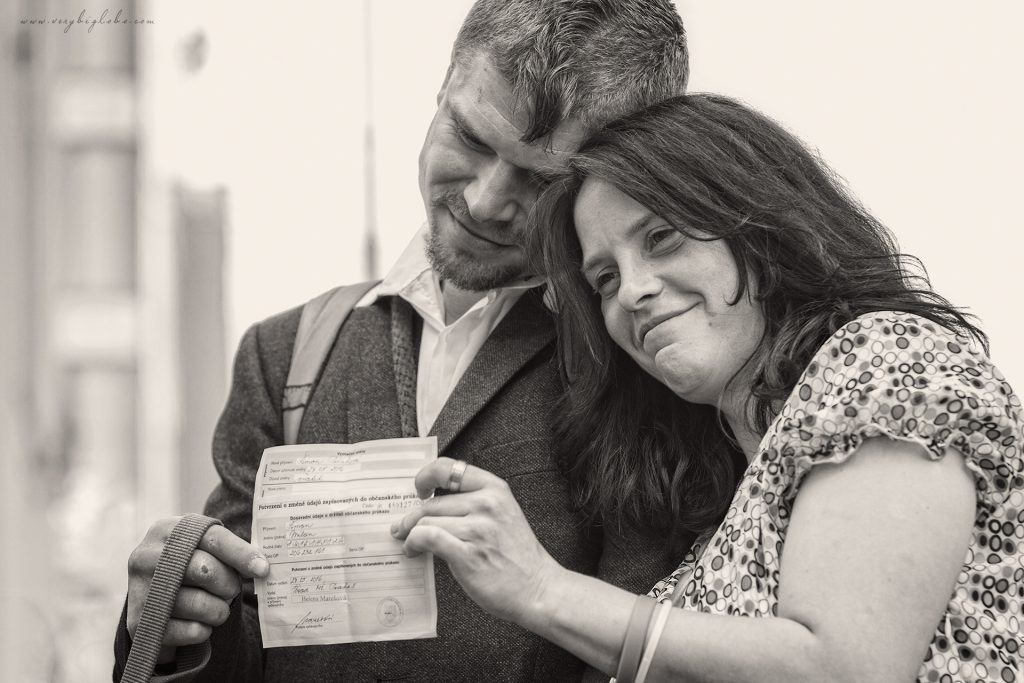 Whole group moved to the park in front of the Prague music hall – Rudolfinum. I couldn’t go with them, but as I was informed, celebration didn’t take too long. Just one hour later, groom was expedited by police to the sobering-up station.

I wanted to share this story with you, because the experience filled me with lot of positive energy. Beside all obvious problems, that this young couple will face from the day one, they were happier for that very moment, than some of us will be for the whole life.  They were celebrating love without need to discuss marital agreement, they were celebrating it as a kids, who don’t care where they will sleep, what they will dress, or what will happen tomorrow… There is something deadly romantic in it.

Personally I find myself balancing on that tinny line between sanity and insanity, between responsibility and carelessness, between moment and abstract eternity, too often. Line is very thin and very slippery.

Imagine if Romana would had found different life path. Maybe she could have been successful model. Impossible? 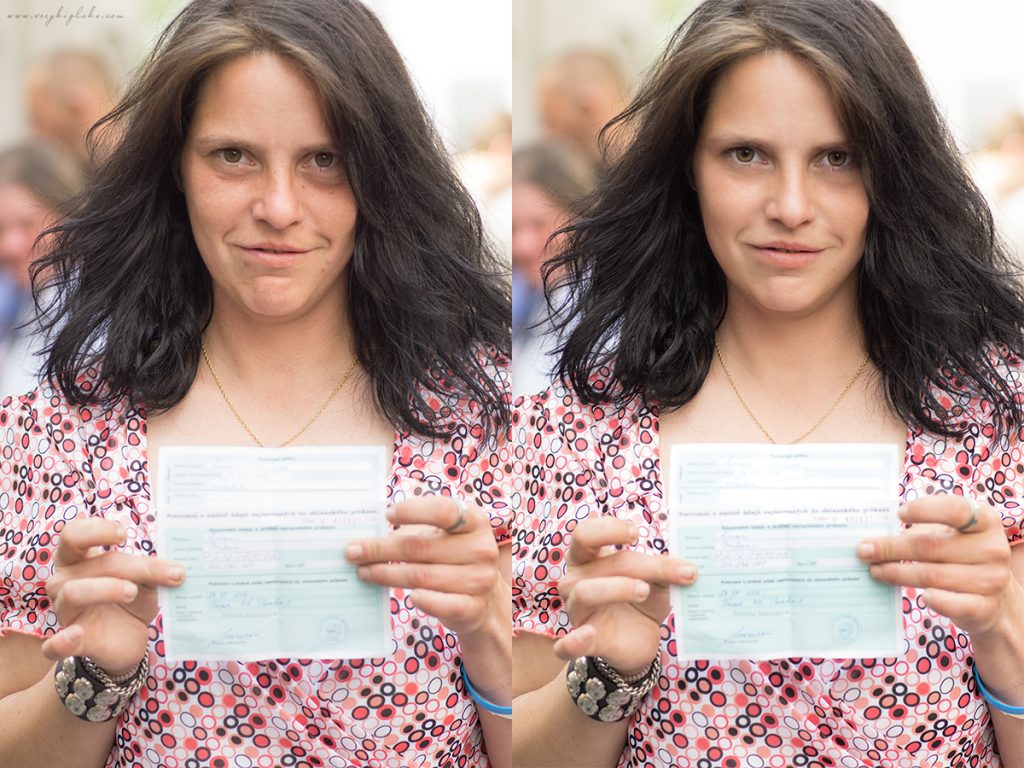 The line is very thin…

Since the bridesmaid was the only other female there, she was the one to capture thrown bucket of roses. I hope it will bring her love too. Would love to spend another wedding, with those nice people… 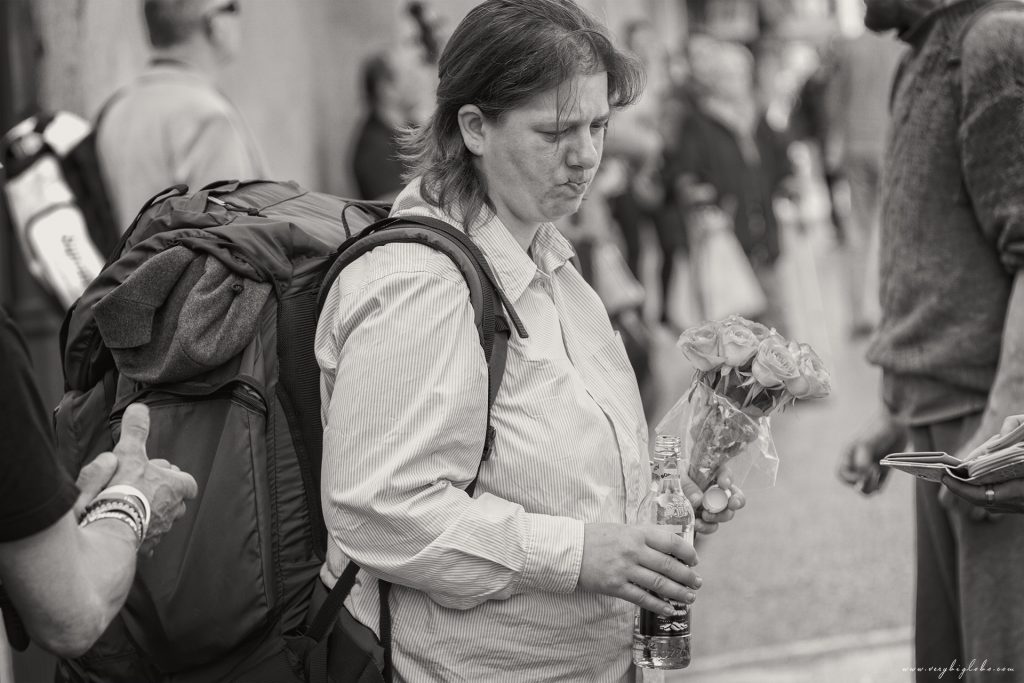