Canon EF 50 f1.2 L USM is one of the most controversial lenses in Canons line-up.
Some photographers loves it, some hates it, it usually come to who owns it and who don’t.
Because, those who owns it for a longer period of time, learned about its severe flaws, but loves what they get in reward.In fact, it’s not a big deal. EF 50 f1.2 L has two main flaws – most of the aberrations is uncorrected, and there is significant focus shift.Uncorrected aberrations are part of lens design I am sure. This 50 is made to deliver smooth OOF rendering, ad slightly dreamy look wide open.Stopped down, lens can be very sharp, probably sharpest among Canon fifty. That reminds me of a classic old Sonnar design. Another current lens that behave alike, is Carl Zeiss Sonnar T* 50mm f1.5 ZM.Focus shift needs understanding and learning its way around, but for NEX users, with focus peaking and processed image in the viewfinder it’s much easier to get proper focus. 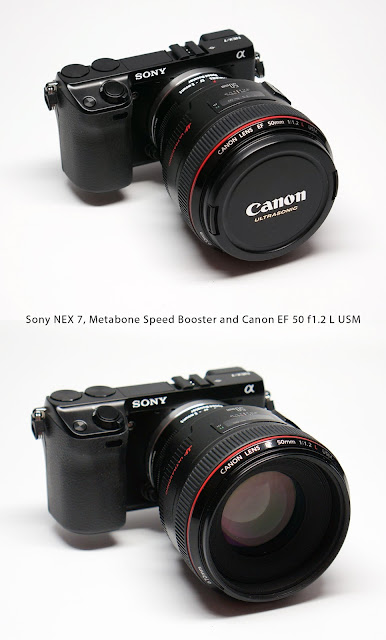 To use it with a Metabones Speed Booster, there is a magic appeal of resulting APS-C specification – 35.5mm and f0.85 !!! However, because of a pixel shading, resulting speed is slower. But pixel shading does not affect DOF, so with a speed booster you can have an image equivalent in terms of DOF to one made by FF at 53mm and f1.2.

Before Metabones Speed Booster, that was hardly possible.

Canon EF 50 f1.2 L USM is often used by pro videographers for its characteristics. For HD resolution the lens is still plenty sharp wide open, while focus subject are nicely isolated from the background. I am not using video on digital still cameras, but here is a short clip showing the DOF when re-focusing from the background to the foreground.

You might notice three thing – slight magenta cast over the frame, quite pronounced barrel distortion and my inability to focus properly at the end 🙂
I will write about magenta casting later on, but it is rather easy to correct. You will need to set-up white balance manually for every aperture though.
Distortion is much bigger problem. You can correct it in video, but you will loose some resolution, and correction is not that easy as with a still frame (depending on the situation). If you have such a static background, like I have here, it is easy. But if you will have moving people in front of your lens, you might not be able to do it, or if you do, it will take lot of time and effort. (Correction would have to be dynamic and nonlinear)

AF? Yes, AF can be used, but I am yet to find someone from my colleagues, who use it on the set. If you want to capture family moments, and you don’t mind focus breathing, it is possible, but I won’t suggest it it anyway.

This time, I tried to include also images taken with a NEX 7 and Metabones Smart adapter. I thought it would be a good idea to see, how the image quality degrades on the same body.

It would be probably better to do so using ISO chart, but than it will be compromised by the short focus distance, so here are results from a field with a focus close to infinity.

First, let’s see, how differ FOV across the systems.

I don’t want to give you exact numbers here, because I didn’t have micro rail to adjust for the exact position of the sensor, but as an approximation, this is good enough I guess.

Before I show you crops, let me get back to that magenta cast from the video sample…

As you can see, the problem is not color balance, but in overall vignetting that implied underexposure in the wide open shot. This is basically what pixel shading means and what it looks like. Because saturation is more pronounced in mid-tones and shadows, magenta cast is also more visible in the wide open shot.

Both shots were taken with Auto WB and they both have same temperature – 4750 K and Tint +1. If you however try to automatically adjust WB with a picker tool in LR 4.3, and you click at the same spot, you will get different temperatures.

For the still images, it is not a problem. For video it might be, because you will need to correct each take separately. The same apply for the exposure.

I was surprised to see, that Metabones SB in this case didn’t improve center resolution, as it was a case with TS-E 17. Extreme corners are bad, but edges are quite ok.
The overall effect, looks like a “blooming” effect and I believe designers confirmed that. But this f stop will be rarely used in photography at such a long distances. So let’s see how they compare at more reasonable f4.

Center sharpness improved a lot, blooming is almost gone, but extreme corners are still mushy and vignetting started to be more pronounced. 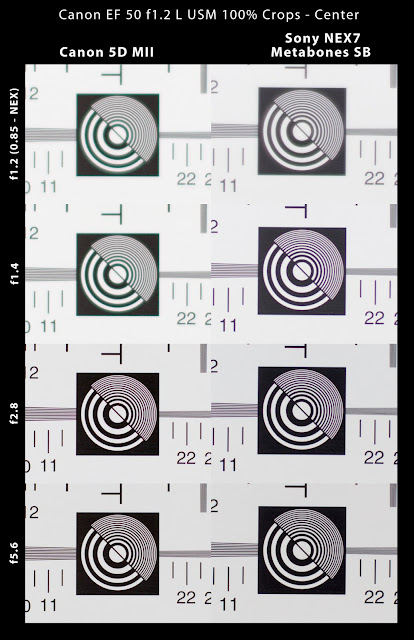 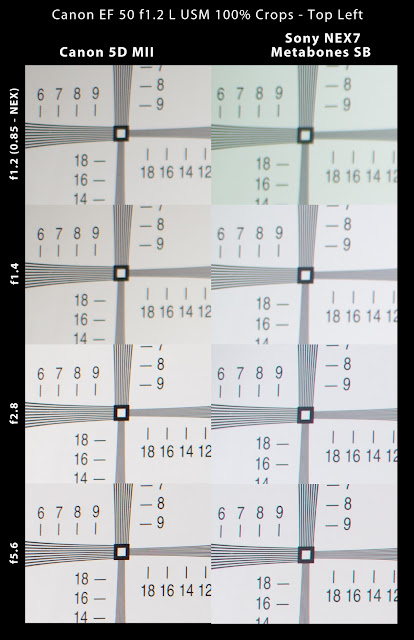 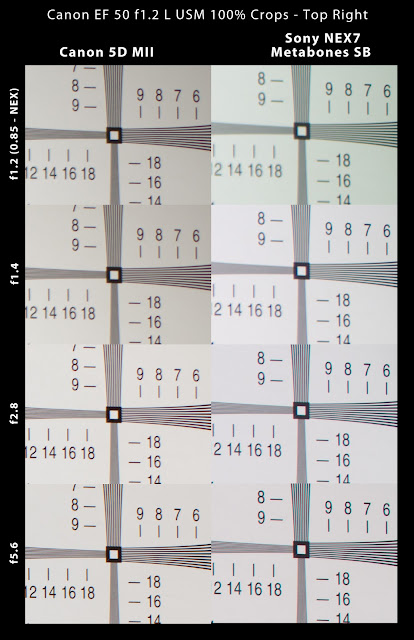 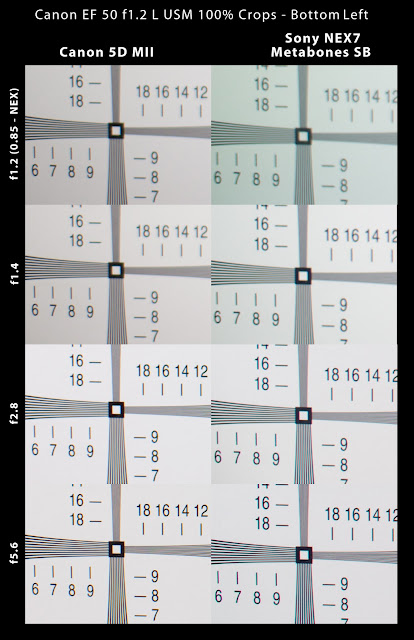 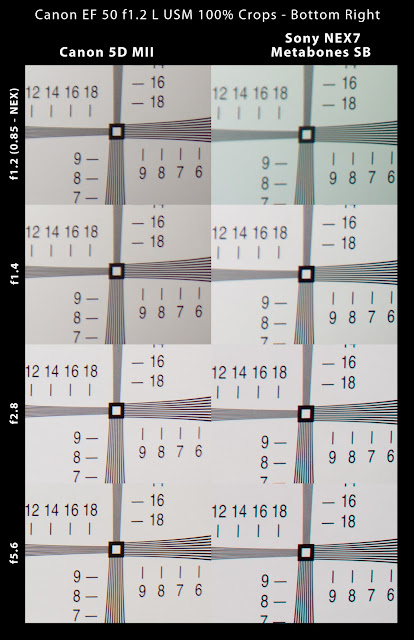 You should enlarge images to their original sizes, to see, that Metabones SB with NEX 7 really improves center resolution wide open and at f1.4. Therefore the differences in a field result test could be due to the not precise focusing or different behavior at longer distances.

At f5.6 and above, cropping will be necessary due to the hard vignetting in corners.

Here are few samples of OOF areas at wide open aperture. The focus plane was moved across the scene, so that you can judge front and back OOF areas. 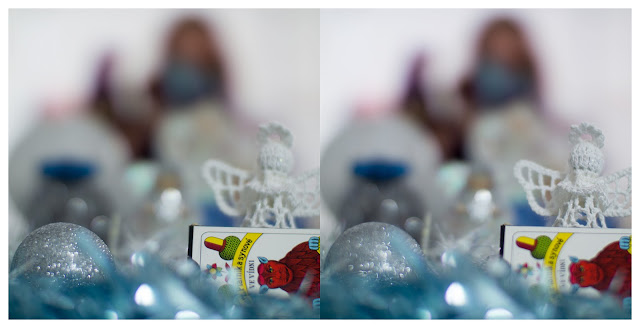 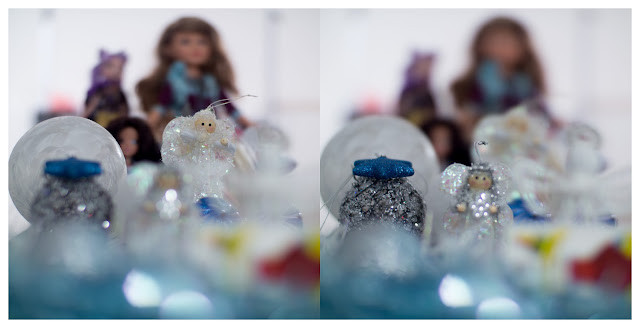 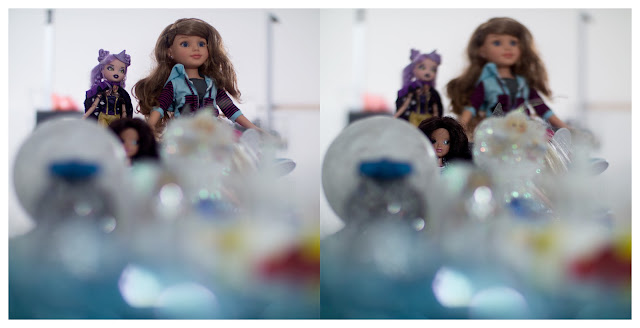 If there is a reason to use Canon EF 50 f1.2 L with Metabones Speed Booster on NEX body, it should be about shallow DOF.
But, it starts to be more and more clear, that Metabones Speed Booster is not such a miracle, as it might look from the recent hype.
There is pronounced distortion and PF. Pixel shading makes attractive lens speed… well, shaded… The resulting underexposure and pronounced color casting are problems that photographer can deal with. Not so much videographer, or at least, not that easy.
Blooming at wide aperture, makes image a bit dreamy, and it would be nice for portraits, if 50mm is your FL.
Hard vignetting from f5.6 and up, involve the necessity for cropping.

I start to look at MB speed Booster as an adapter for UWA and WA lenses up to some
35 mm. Of course, I tested so far one of the lenses with biggest projection circle on FF (TS-E 17), so I have to see, how other “normal WA will perform. From some initial tests that I have done with EF 24 f1.4 L II, results looks promissing.

But above 35, Speed Booster has to be seriously thought off, before you click and buy it. There is Sony SEL 35 f1.8 for less than SB, that will give you similar FOV on NEX and DOF of some f2.8 FF equivalent. That is good enough for most things, especially if you use image stabilization and AF.  There is also Mitakon and SLR Magic with 35 f0.95, that we have to see yet, but they are not much more expensive than Speed Booster.

If the shallow DOF is what you are after, than SB with Canon EF 50 f1.2 L on NEX, will most probably please you. For anything else, there are better options at this FL.