Now when we have everything clean we can proceed with lubricating and re-assembling the lens. Those two operations comes simultaneously, so I made a short video explaining how I make my lubricant mixture, how to apply it and where and how to assemble tricky part of the focus helicoid.

First we should start with the aperture a preset aperture ring resemblance though.
Step 1. Assembling the aperture preset ring and the ring bellow that secures it
Mark the position of the hole, for the screw that fixes the ring in place. This will help you finding proper position for the screw when you put the ring back. 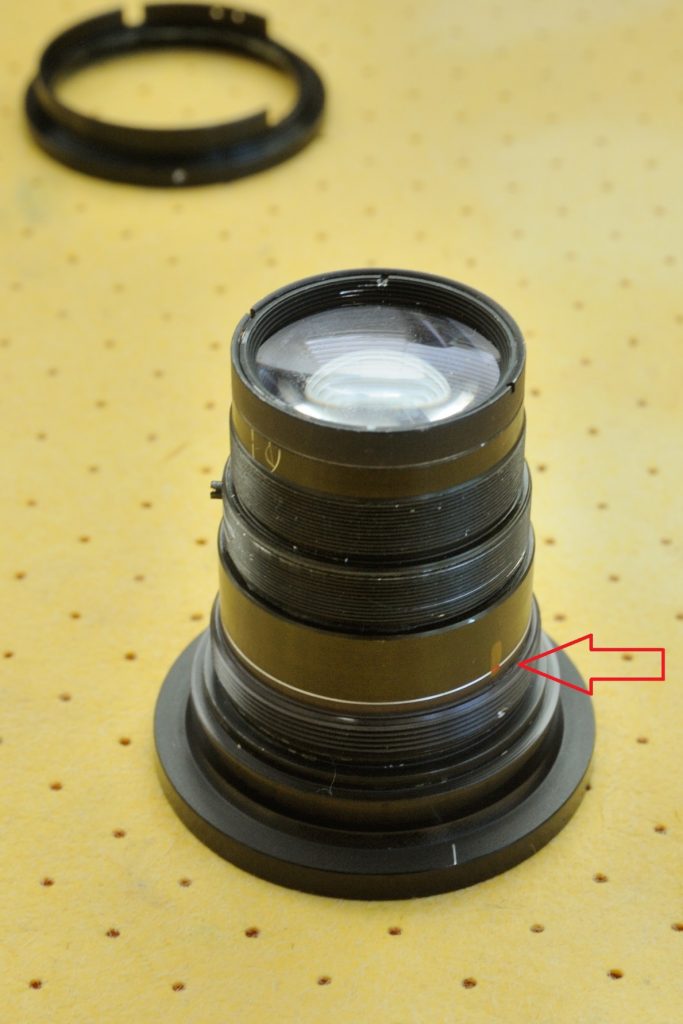 Put some grease around the block as per picture bellow. I am using withe lithium grease, which comes in a spray can. Don’t apply spray directly on the lens, rather put some to the bowl and use brush to apply it. This way, preset aperture ring will be lubricated for the smooth movement. Since it has click stops, I like it so, but if you prefer more resistance, you can use denser grease. 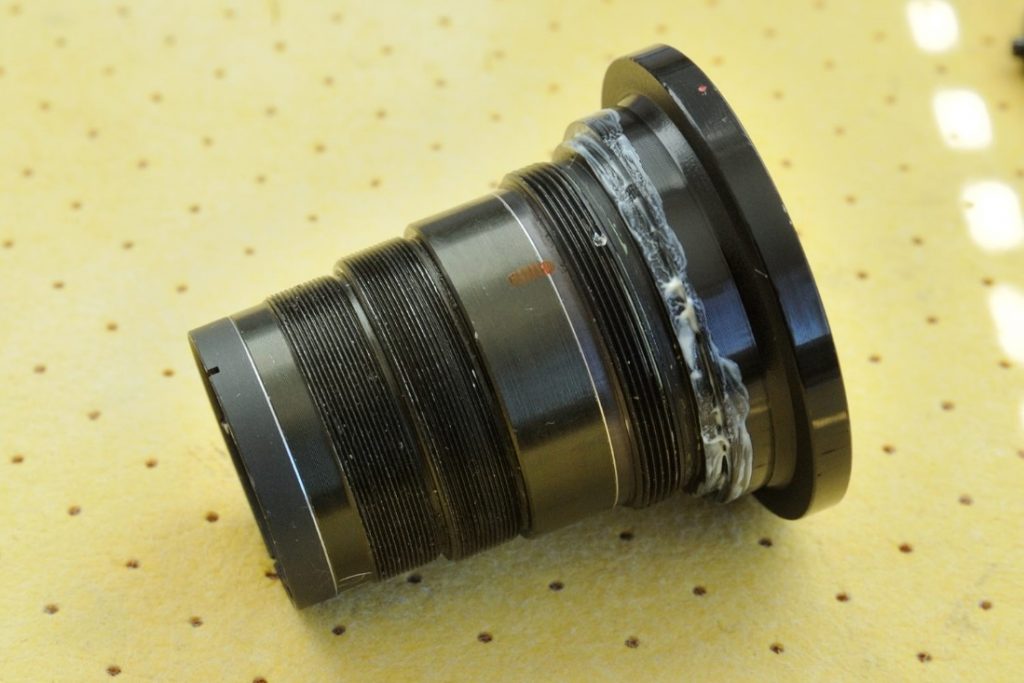 Put some grease also on the inner side of the preset ring and especially on the rim which comes in the contact with the ring that fixes it from bellow. 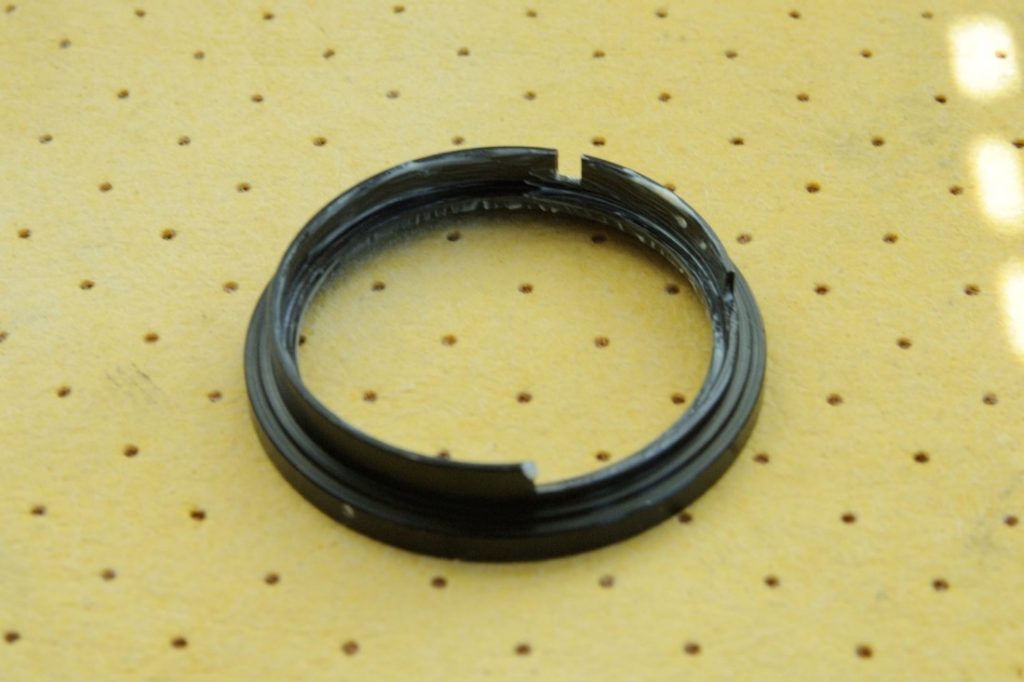 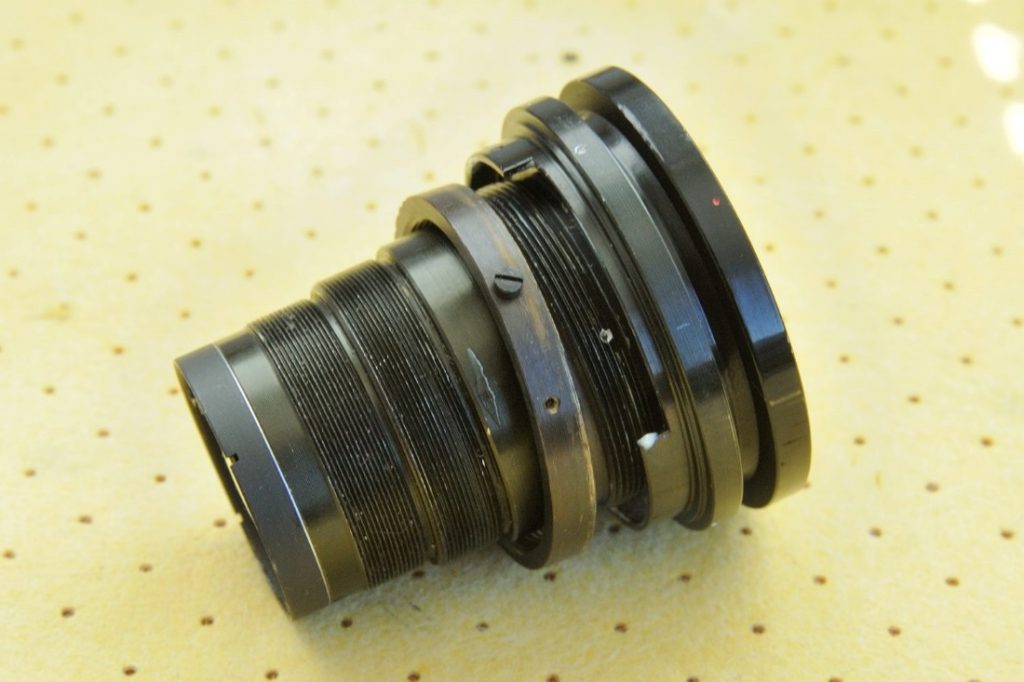 Now the mark that you made at the beginning of this step, will come handy. Align the while on the safety ring with the mark and tighten the screw in place. 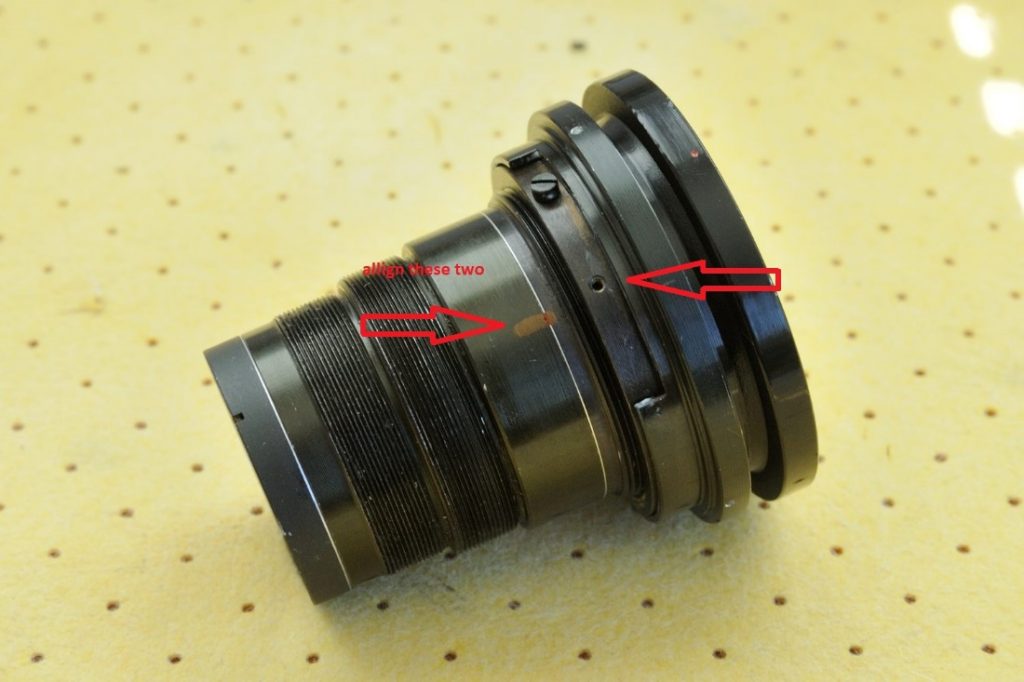 Make sure that the preset ring turns nicely. If you want to work out new lubricant a bit, remove that bog screw. This will allow you to turn the ring 360°. Once you’re satisfied with the smoothness, put the big screw back and you are done.

Step 2.Putting back roller and related spring/lever
Put some grease into roller leads/notches. 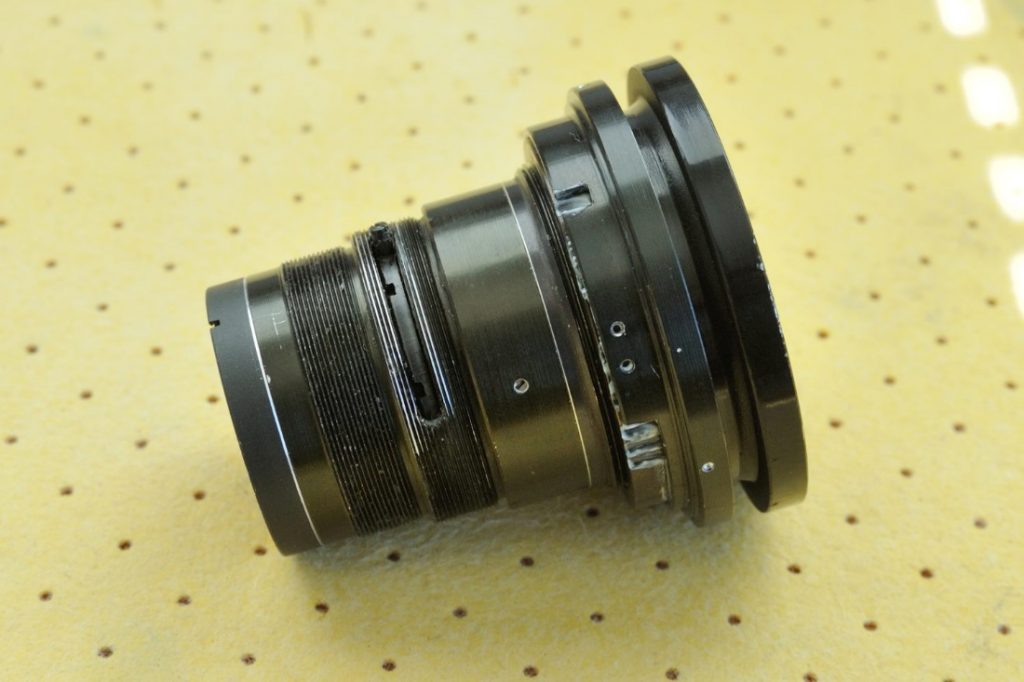 The notches that are most apart are for the f2 and f2.8 positions. Put the roller at any notch and once it settle in place, put the spring/lever over it. 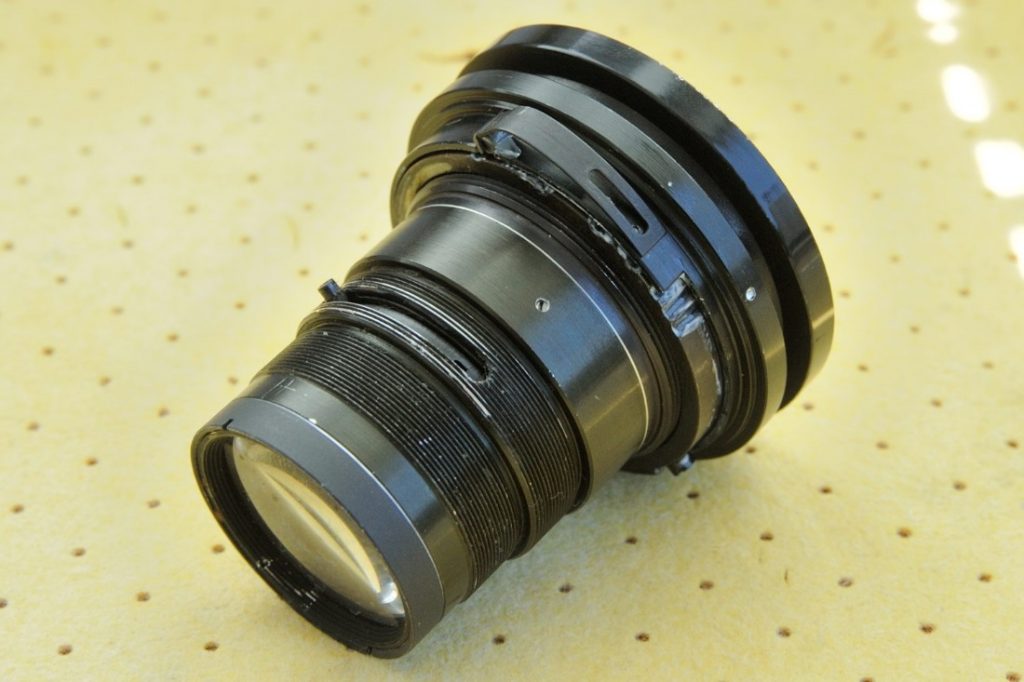 Here is a close-up of that part 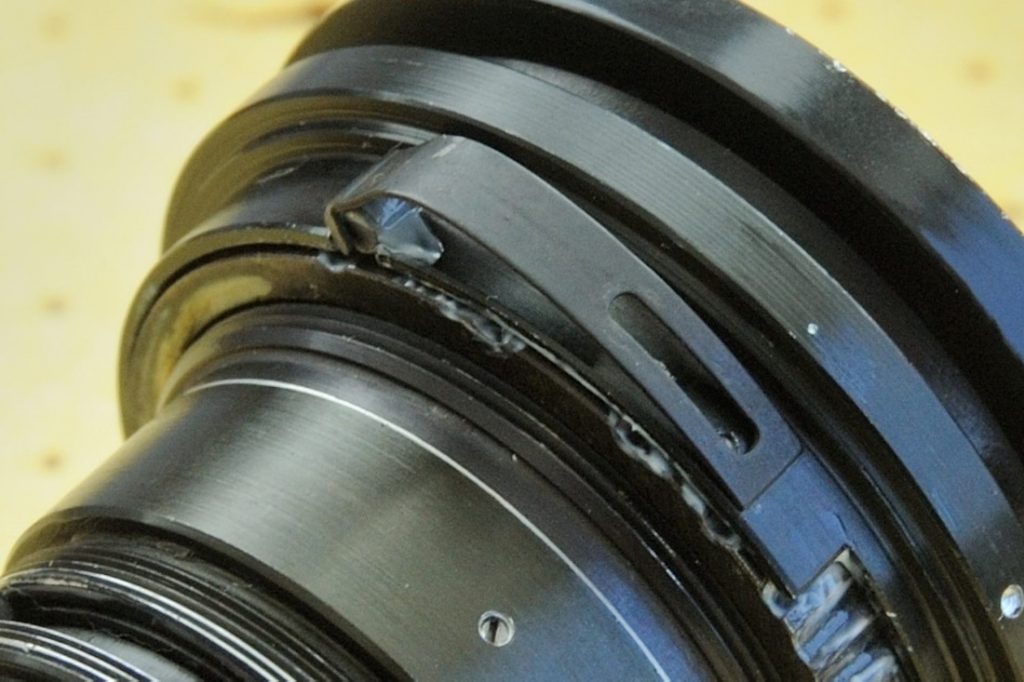 Put first the rear screw that comes into guide slot. Once in place, move the spring/lever back and forth, to adjust its position. Fasten that screw, so that you can test the movement of the preset aperture ring. If everything works as it should, fasten the second screw with which you can adjust the resistance of the preset ring turns to your liking. 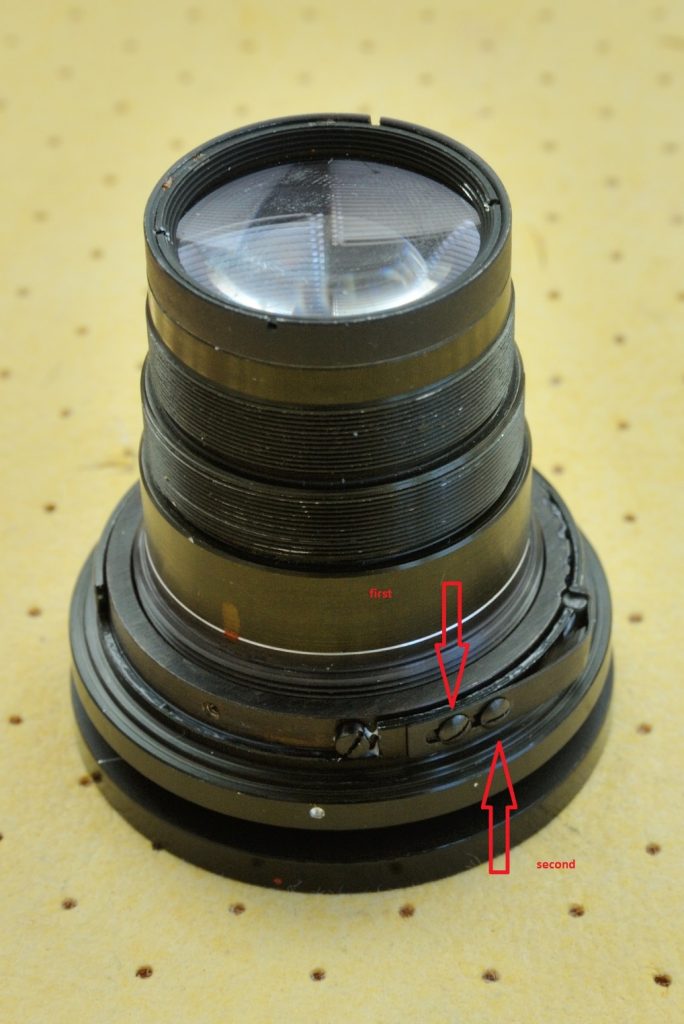 Step 3. Assembling aluminum outer aperture ring.
Position the inner preset ring to f2. As written above, this is the notch that is furthest apart from the others. You will now be able to align the number 2 on the aluminum ring, with the red dot on the the lens. 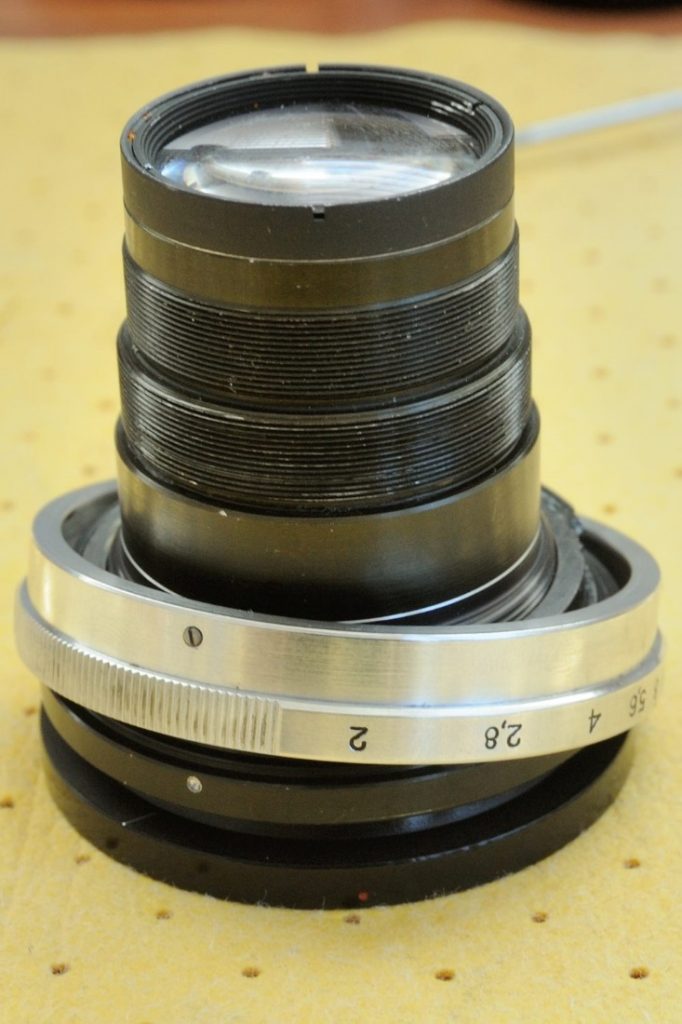 At this position, holes for three screws should be aligned too. Put the screws back and fasten them, Do not apply too much force, otherwise you might damage screw heads. 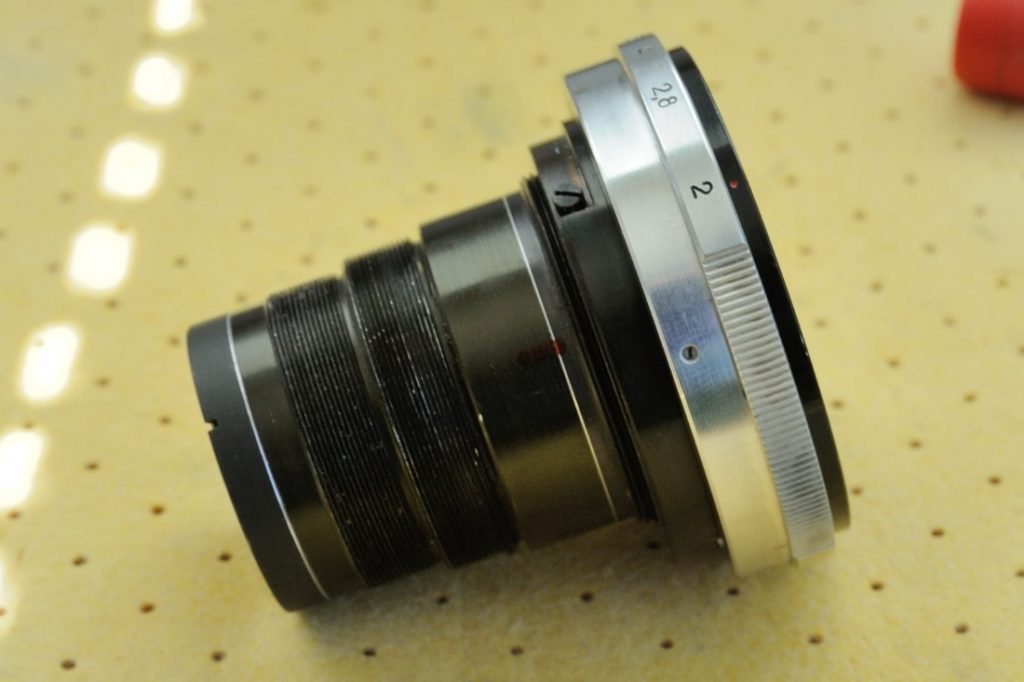 Step 4. Assembling the aperture helicoid
At this moment, you should check if your ring is properly lubricated. I used thinner grease on this lens, for smoother operation, since the focusing ring is wide enough and it doesn’t collide with the aperture ring like on some other lenses, where denser grease, causing stiffer operation (more dampened), might be better in order to prevent accidental turn of the aperture. Be very careful how you grease thread, because this is where »oil on blades« comes from, in this type of Russian lenses. I put a small amount of thinner grease mixture away from the cross-section bellow. 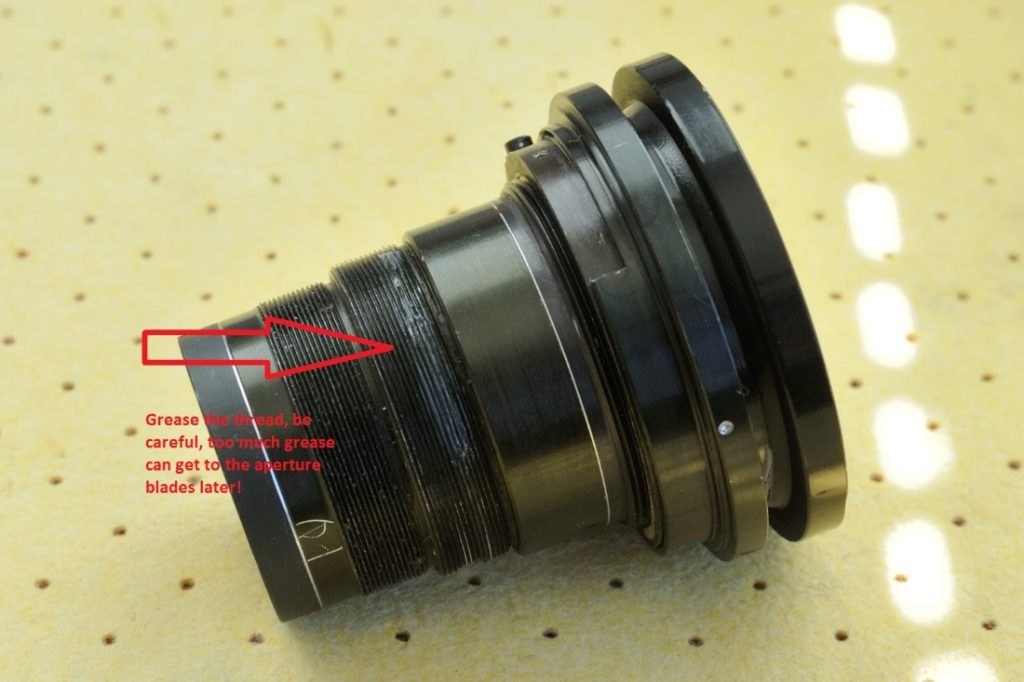 Put back the aperture helicoid, screw it all the way down and then turn it back a little. Put back the limiter screw, but don’t fasten it yet. 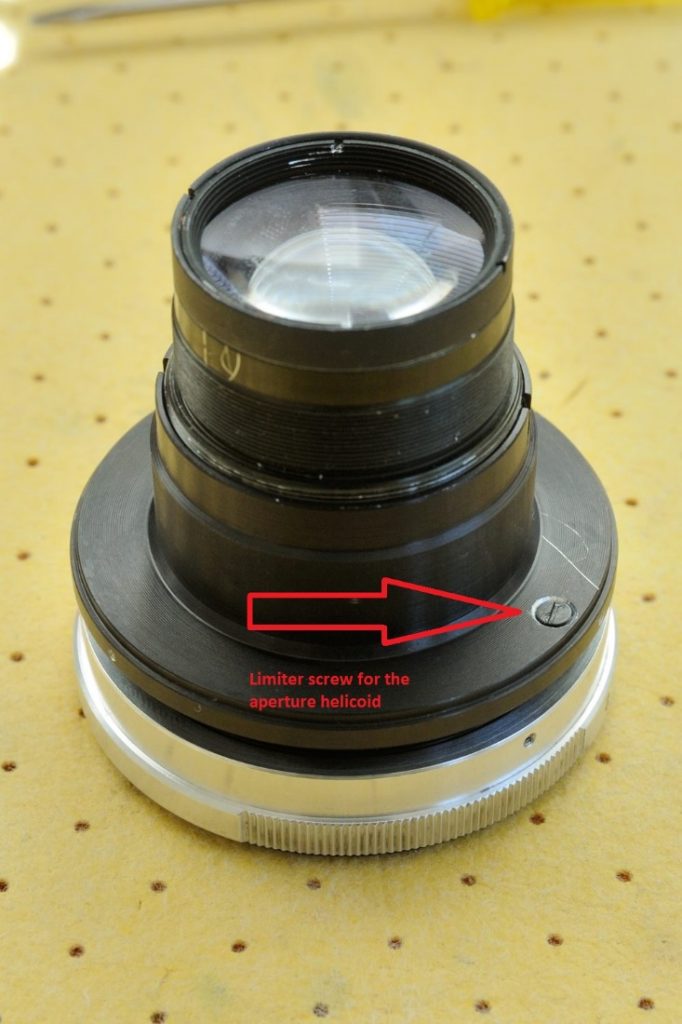 This is where you turn the aperture helicoid slightly CCW to align the position of the limiter screw. Once in place, tighten it up. 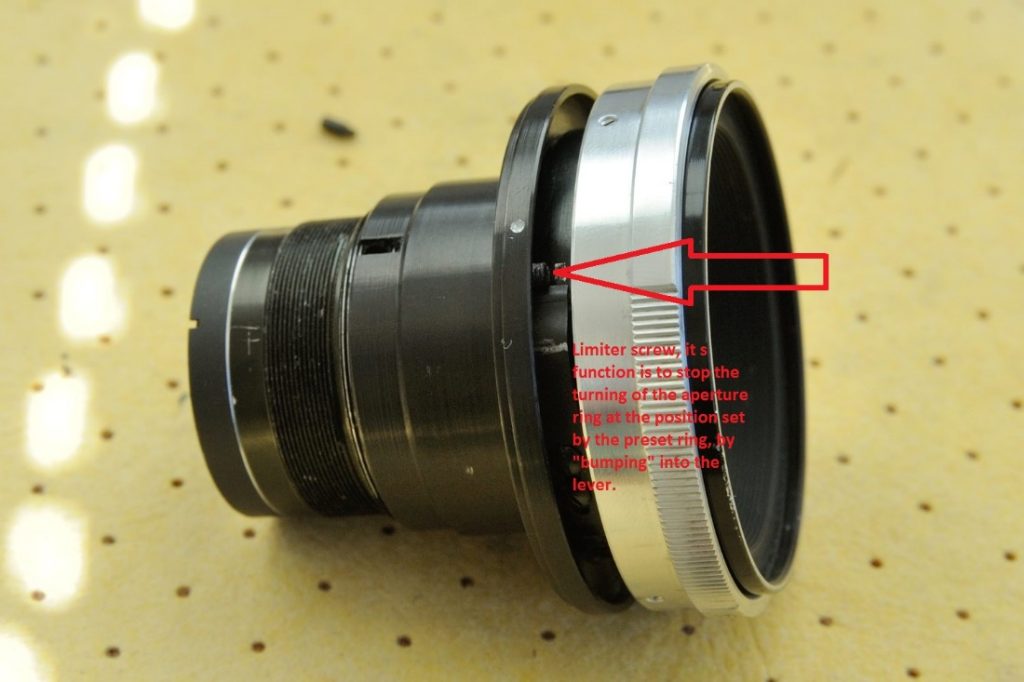 Step 5. Mounting the aperture helicoid coupling screw
Remember that groove which I suggested you to mark in the Step 4. of the chapter II, because there is another on the opposite side? That mark is now coming handy. If you got everything right, aperture wide open (f/2) marked groove should be aligned with the internal aperture ring and the hole for the screw. 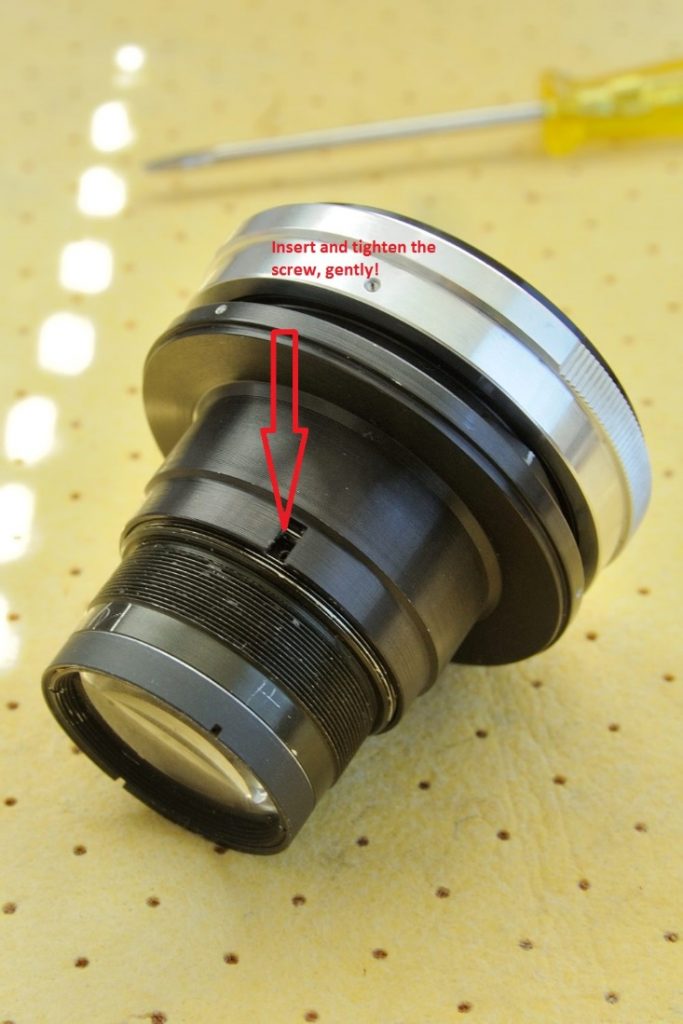 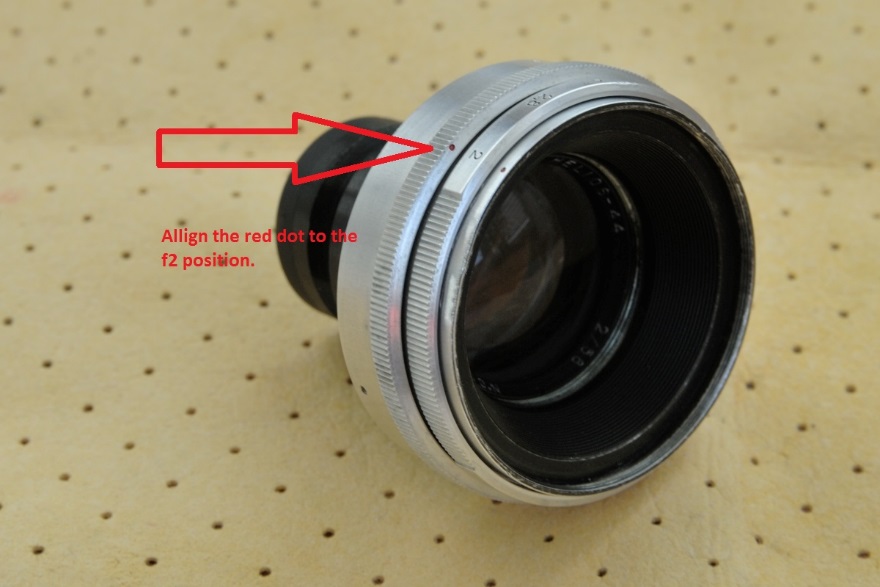 The outer aluminum ring had little tolerance on my lens, it fits pretty tight to the inner ring!
The reassemble of the aperture part of the optical block is finished. We can move to the focus helicoid part.

Before we proceed, you might want to watch the video from the beginning of this chapter once again. https://www.youtube.com/watch?v=fDJfMN_afhQ&t=38s

Step 7. Assembling the front inner focusing ring
I use little grease as a general rule. I usually add a drop of oil to the grease and apply the mixture with a brush. Avoid to put too much grease from the start as it might result in the stiff focusing. This main thread can be accessed later, by removing the outer focusing ring, should you decide to add more grease.
Position the helicoid with the screw hole at 6 o clock position, from the viewer perspective 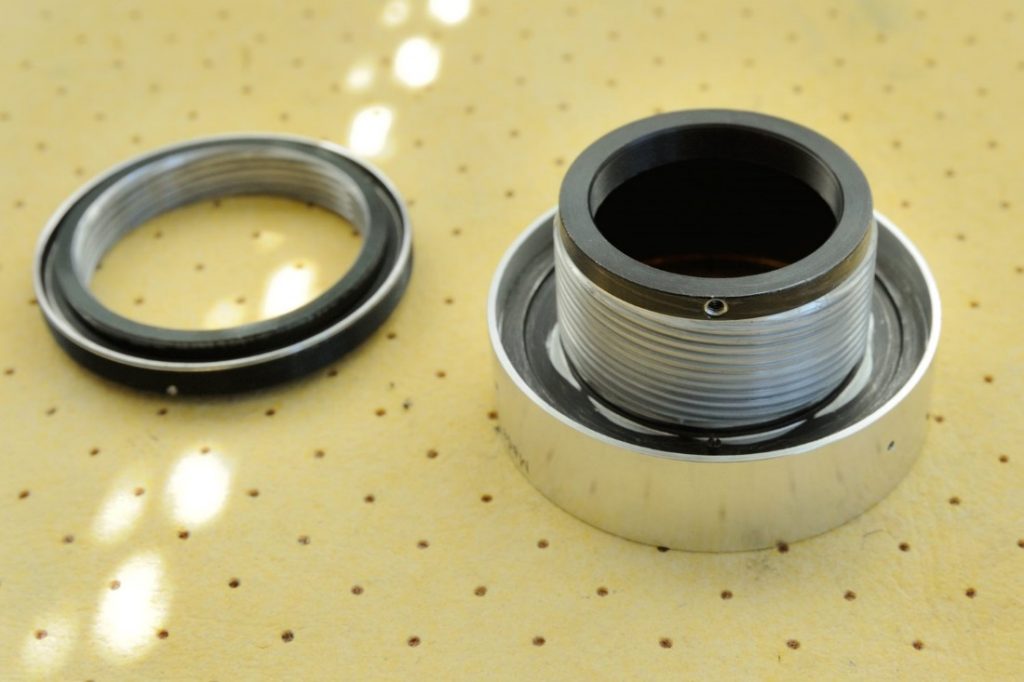 Remember that important mark and it’s position that I wrote about in the chapter I, step 5? Place the front inner focusing ring so that your mark is around 2 o’clock position, and by turning it slightly left and right find the entrance step. 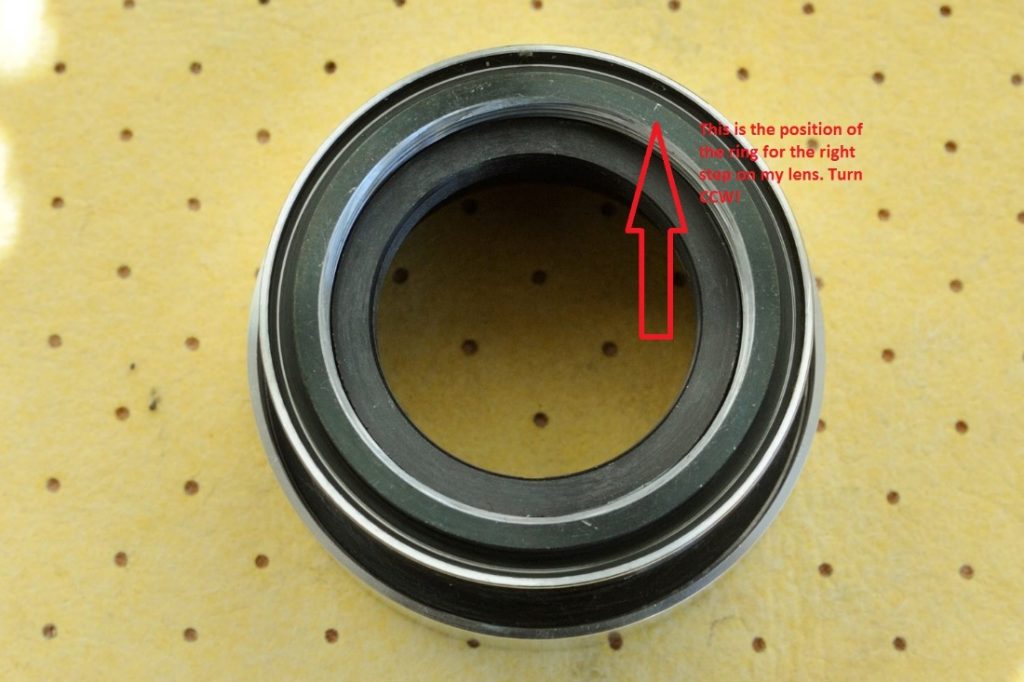 Once it starts, turn it CCW until you reach the marked position bellow the screw hole without any spacing between. This part is explained in detail in the video linked above. If you lost your mark, don’t panic. Watch the video again and you will soon make it right. 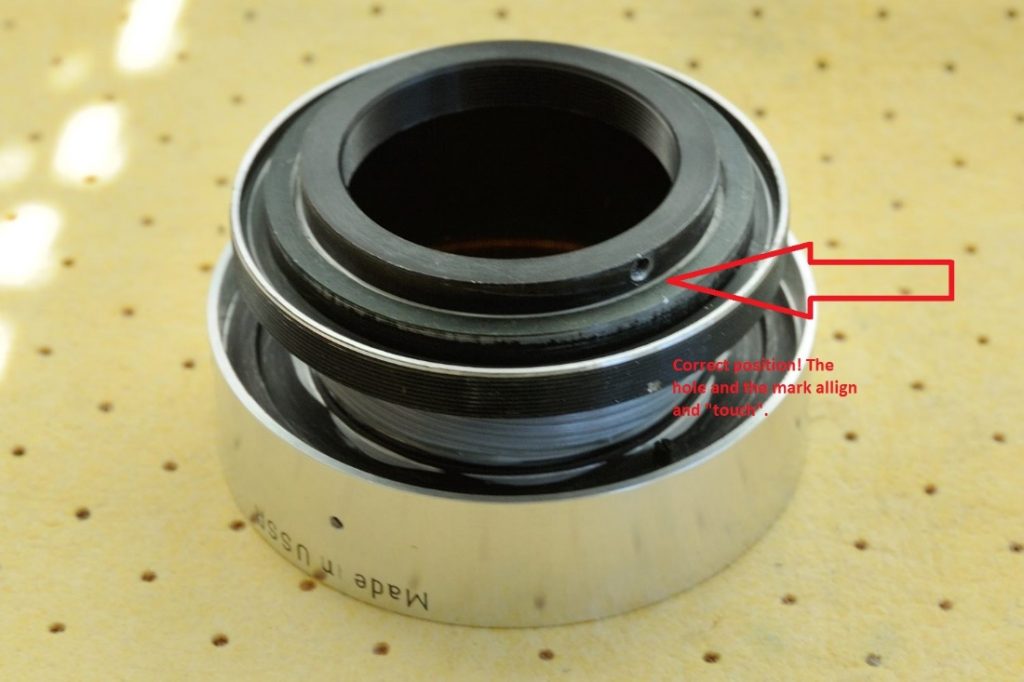 Once you get the ring in the proper position, tighten the limiter screw. Add some grease to the groove on the ring. Go easy with the grease, since this is the actual part, where most of the friction during focusing happen. I suggest a medium thin grease. Too thin (diluted) grease is also not good as these parts might grind and thick grease can be sticky and make focusing stiff 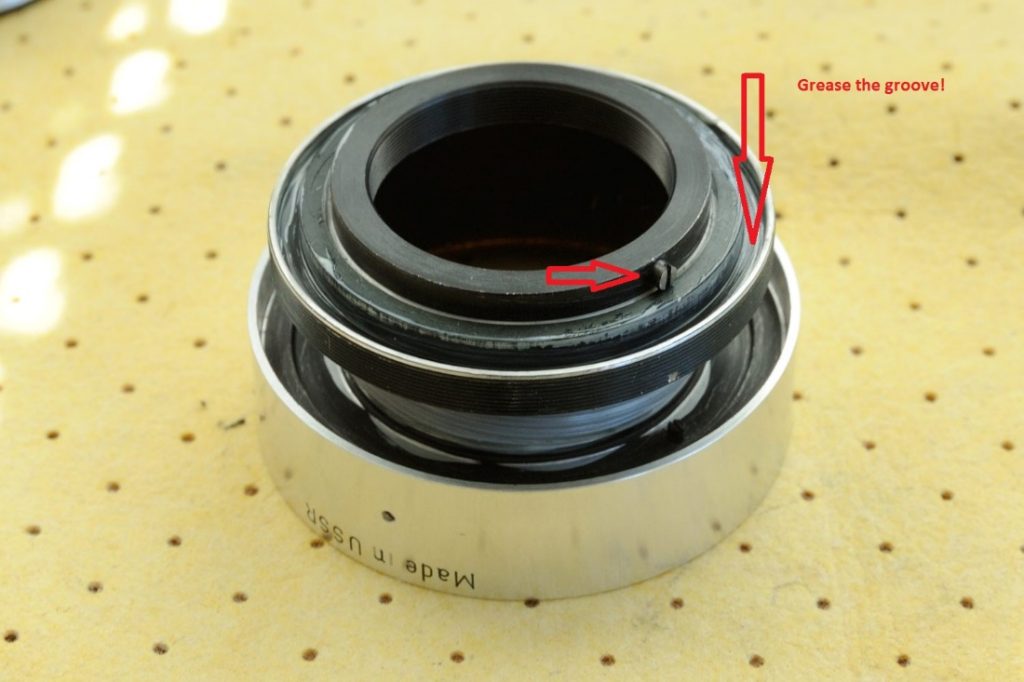 Step 8. Putting back the aluminum housing of the front inner focusing ring
Align the groove on the inner side of the ring with the limiter screw. Grease the groove. This time, the thicker the mixture the better since it will decrease or eliminate possible wobbling of this part. Put a small amount of thicker grease (lithium e.g.) in the groove. You can also grease the inside of the ring, with thinner grease mixture 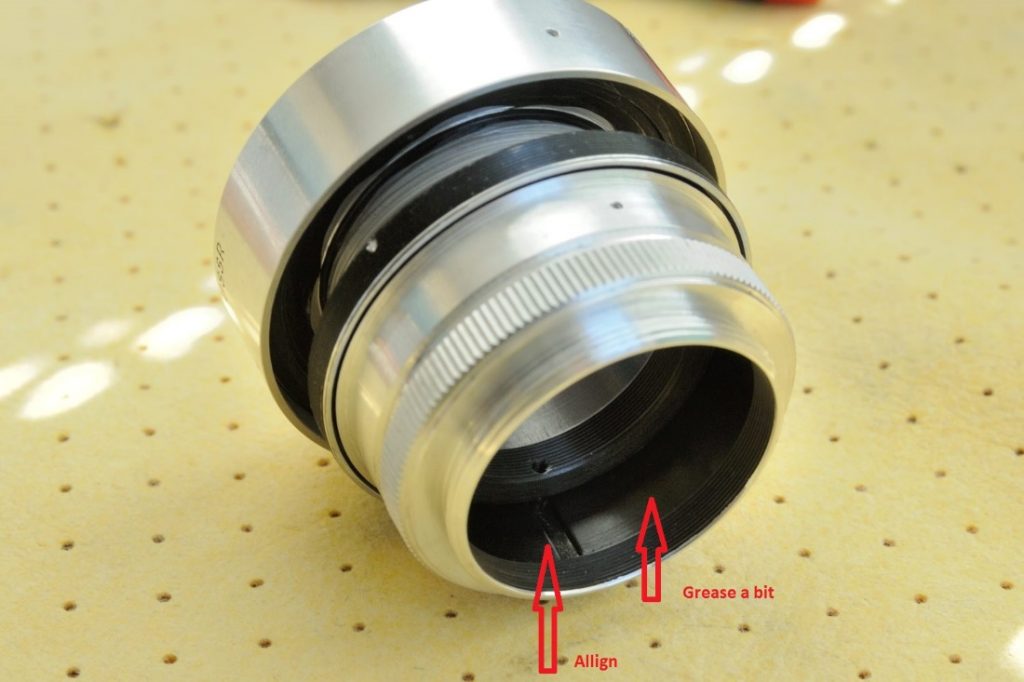 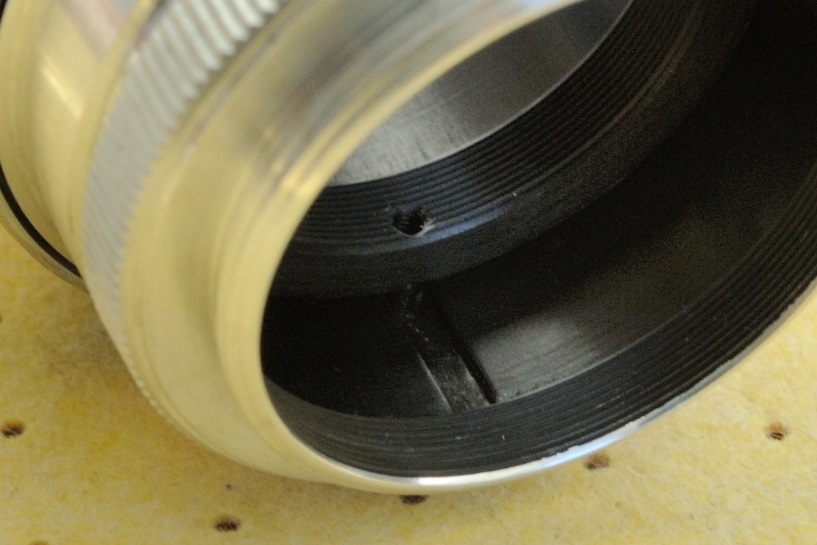 Check if focus ring is set to minimum focus distance (MFD). That is position when it touches the limiter screw. Put the mark above one of the recessions for the screws on the main inner focusing ring bellow as on the picture bellow. Finally add some grease on the rim part of the aluminum housing. 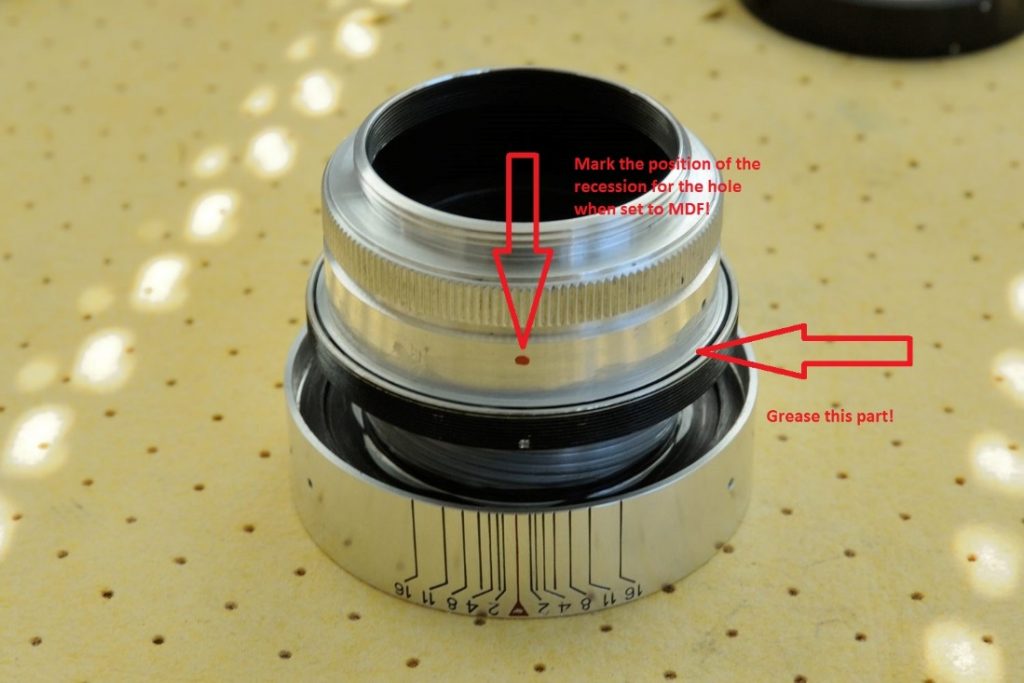 Step 9. Putting back the rear inner focusing ring.
Depending on the quality and state of the threads, this can be challenging task to do. I suggest that you first try to screw those parts (the front and the rear inner focusing rings) together, before you put them on the lens, to see how it goes.
There are the two notches for the spanner on the rear inner focusing ring. If you use spanner to tighten those two parts, be careful how much force you apply. Tightening the rear ring you force the front ring to go against the limiter screw bellows it. Too much force can damage or even break the screw or/and it can flatten it a bit, introducing some play in the focusing mechanism. Don’t hurry, this part needs some patience and probably few attempts before you make it right.

Step 10. Putting back the aluminum housing of the rear inner focusing ring
After complicated step 9, everything should be easy from here. Turn the focusing ring to infinity and put over the aluminum cover ring. Use the infinity markings for alignment. Fasten three small screws. 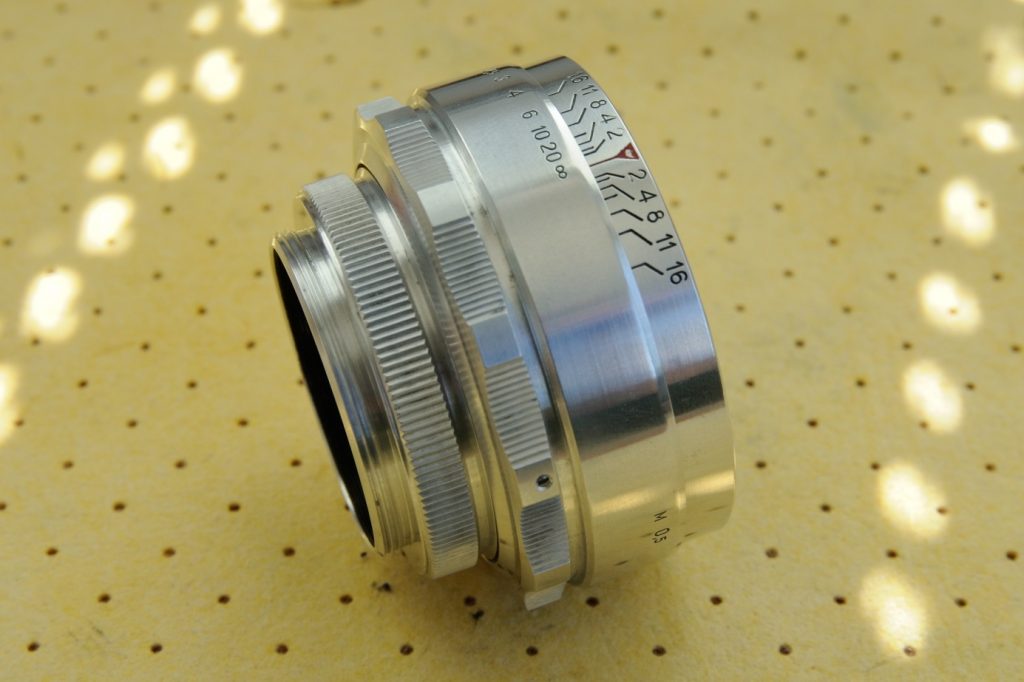 Step 11. Final step
We are almost done, let’s put optical block in the focus helicoid. Put the focus adjustment shim on its place. 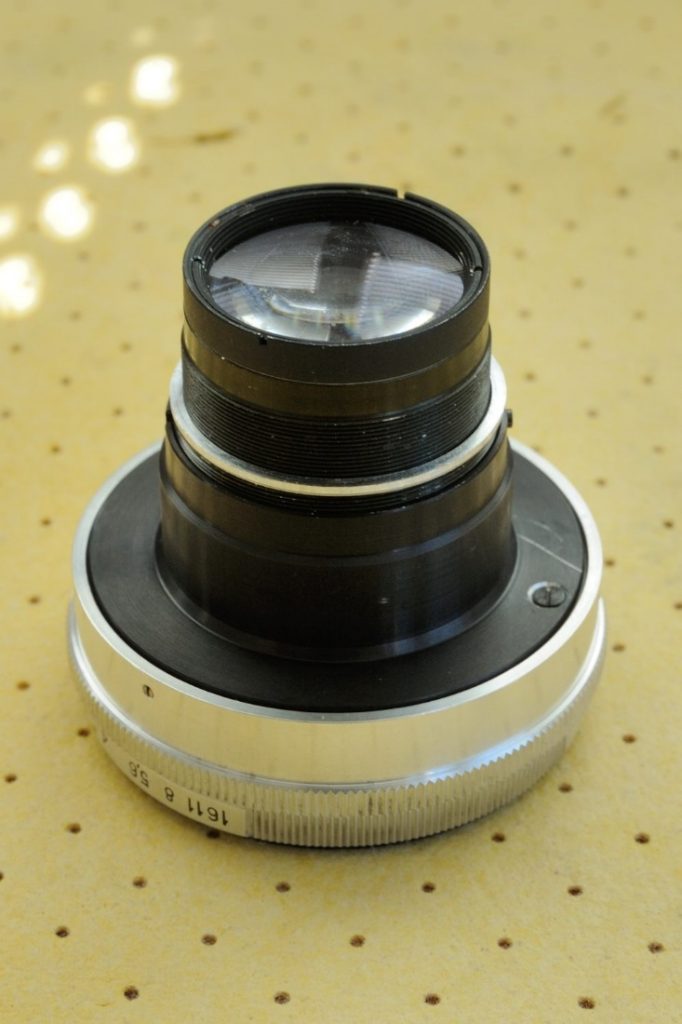 The last step, in the automotive industry would be called “the marriage”. Screw the optical block into focusing helicoid.
I had two copies of this lens and on both, the f16 sign and the infinity mark where slightly off, (for the same amount). It s probably due to the thickness of the shim.

Now take a deep breath and look at your lens. How do you feel?
To help this page survive, your donation will be highly appreciated.