Here it is, a nice Helios 44 in the aluminum finish version. Let’s s restore it mechanically and cosmetically.

Step 1. Separate the lens into two blocks.
This can be done by holding the front of the lens and turn it CCW against the rear part of the lens 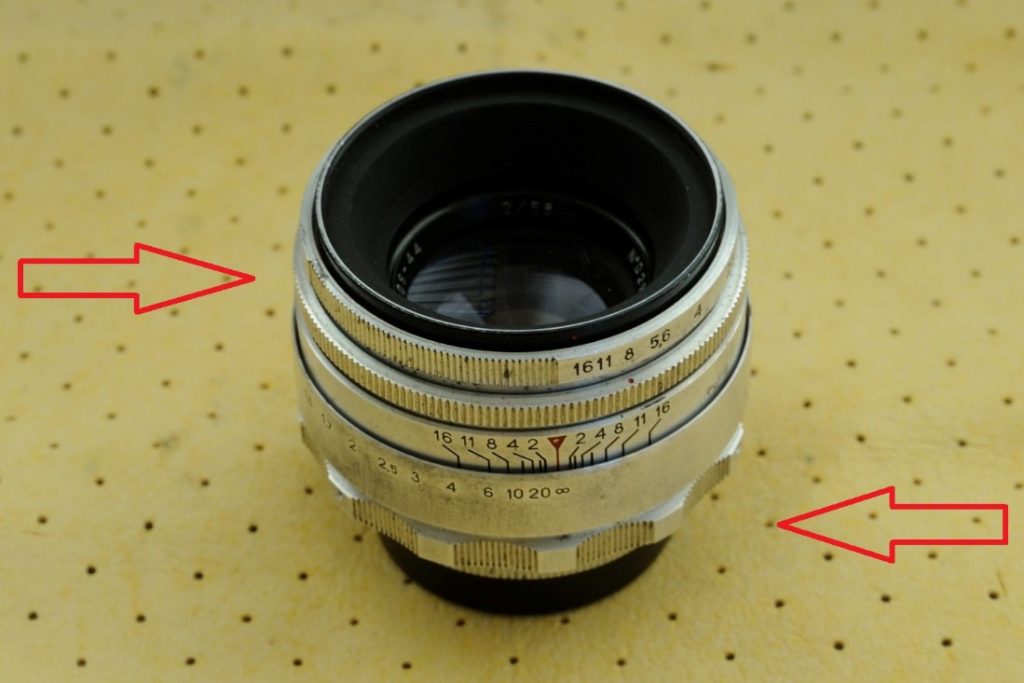 Two pieces should come easily apart. Refer to the picture above, where it is best to hold the lens, or find the most comfortable hold for yourself. Separate two parts (keep unscrewing them until they separate). Result should look like this 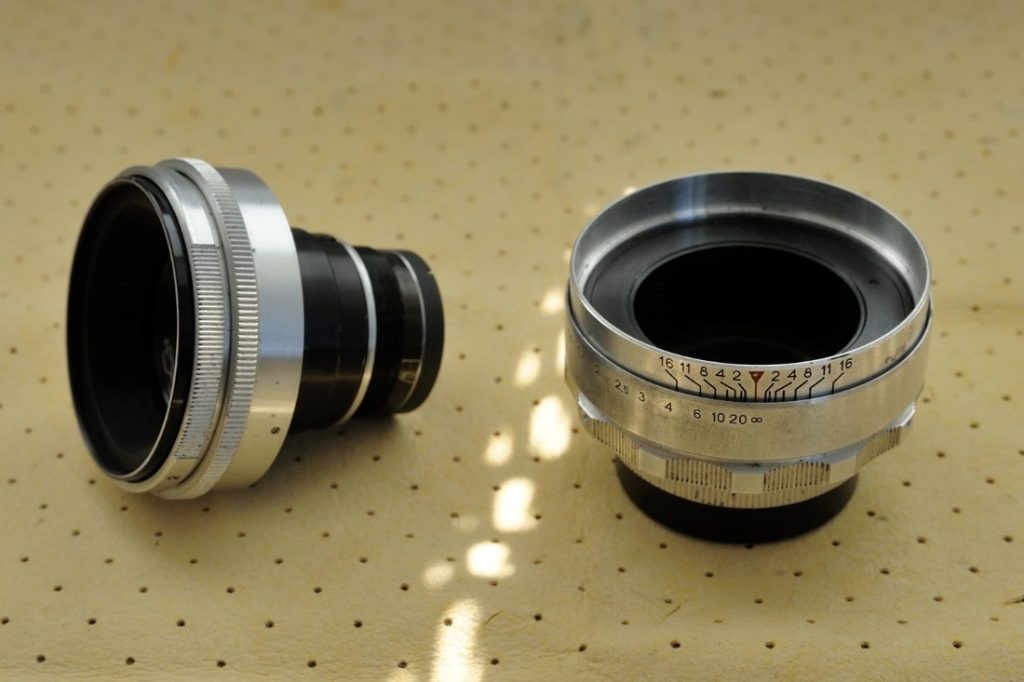 Step 2. Taking off outer focus ring.
Release 3 small screws indicated by the arrows on the image bellow. Take a good care, not to lose them!
(There are few options how to organize small parts and screws during the process. One is to use some sort of organizer box, such as pills organizer e.g. and insert parts successively into the bins. This way you can keep track of what comes first.  Whenever possible, put the screws back to corresponding holes and tighten them on place, or use the tape to secure them in the place. This is safest way to remember what belongs where, but it might be risky, if you don’t pay extra attention in securing the parts (screws) in their place, since they can fall out unexpectedly.) 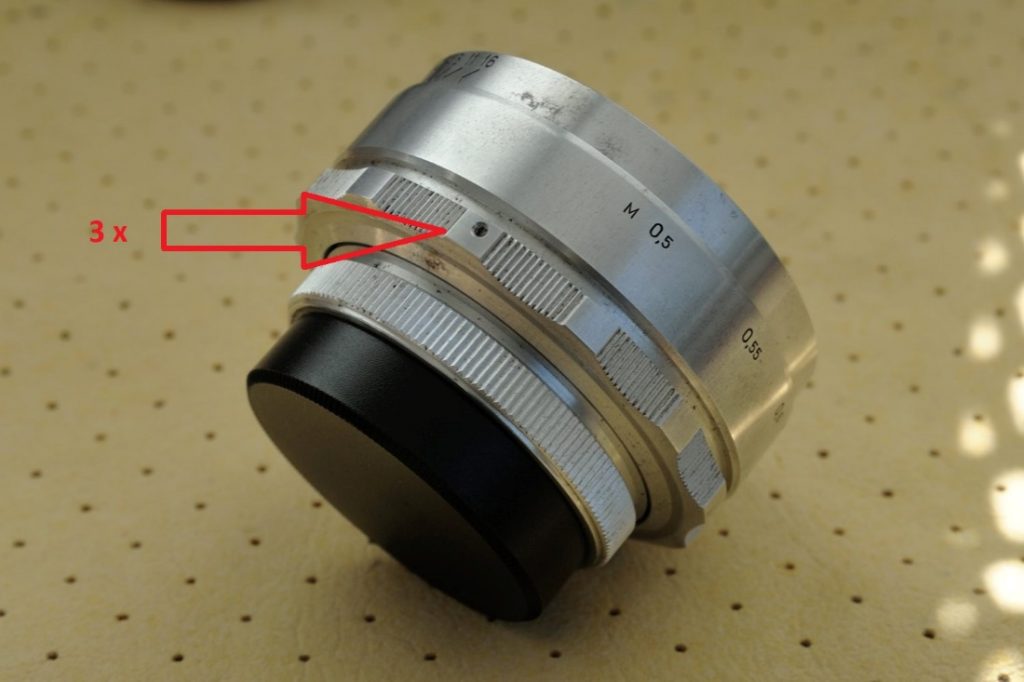 Step 3. Removing the back part of the inner focusing ring.
This time it s better to remove the screws completely and keep them separately. 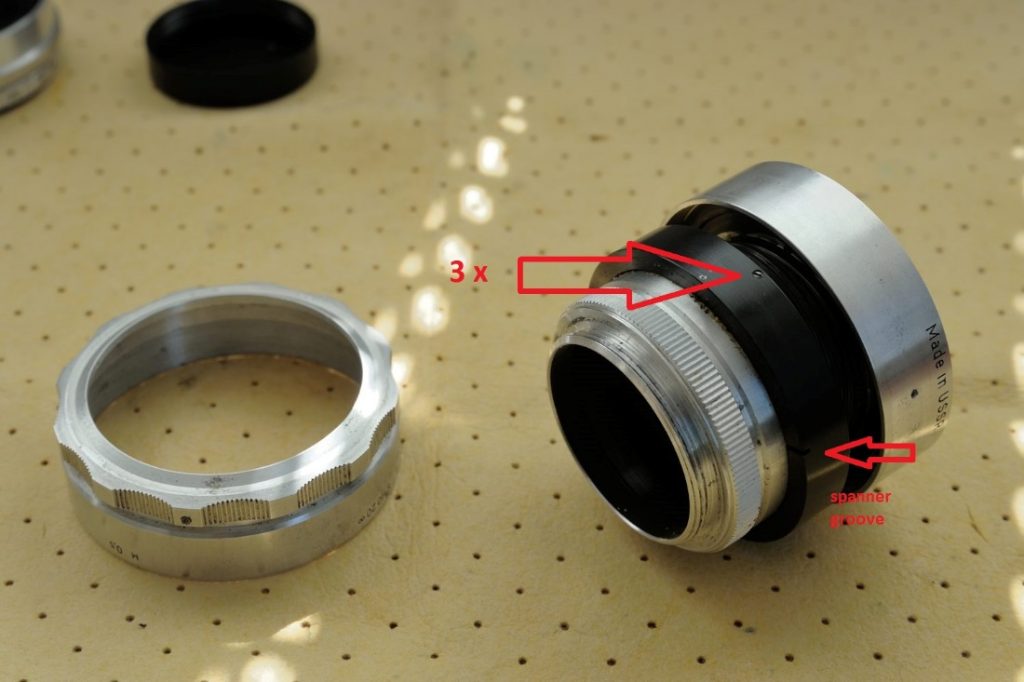 After you do that, turn the ring CCW. This ring can be stuck at first and hard to release. If that happen, try to grab the ring with your fingers, covering as much of its surface as possible and applying even pressure. Do not apply too much pressure however, since you can deform it! The key is to spread the pressure around the ring. If it still resists try putting outer focusing ring back and use it as a gripping tool. On some lenses, there are groves for a spanner which will certainly help in your effort. If nothing of the above helps, try to put few drops of the rust eater or deep penetrating oil around the thread and apply gentle force in both direction for a few times. Repeat this procedure every day as long as needed and be patient. Sooner or later you should be rewarded. 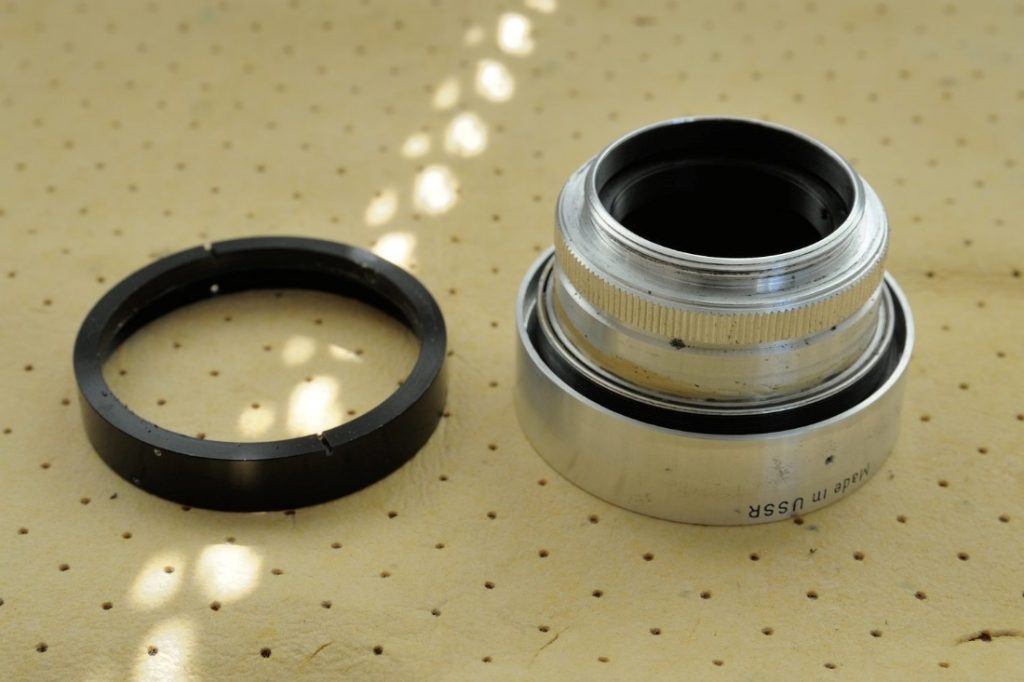 Remember well this ring, as it might be challenging to put it back correctly, but we will deal with it later. Also be sure to clean it well from the dirt and old grease.

Step 4. Taking off the silver housing of the front inner focusing ring.
To remove this part, you need to gently lift it up. Be sure not to try to rotate it on either side. It has a groove inside, where important screw slides, which can be damaged if you try to rotate the housing. 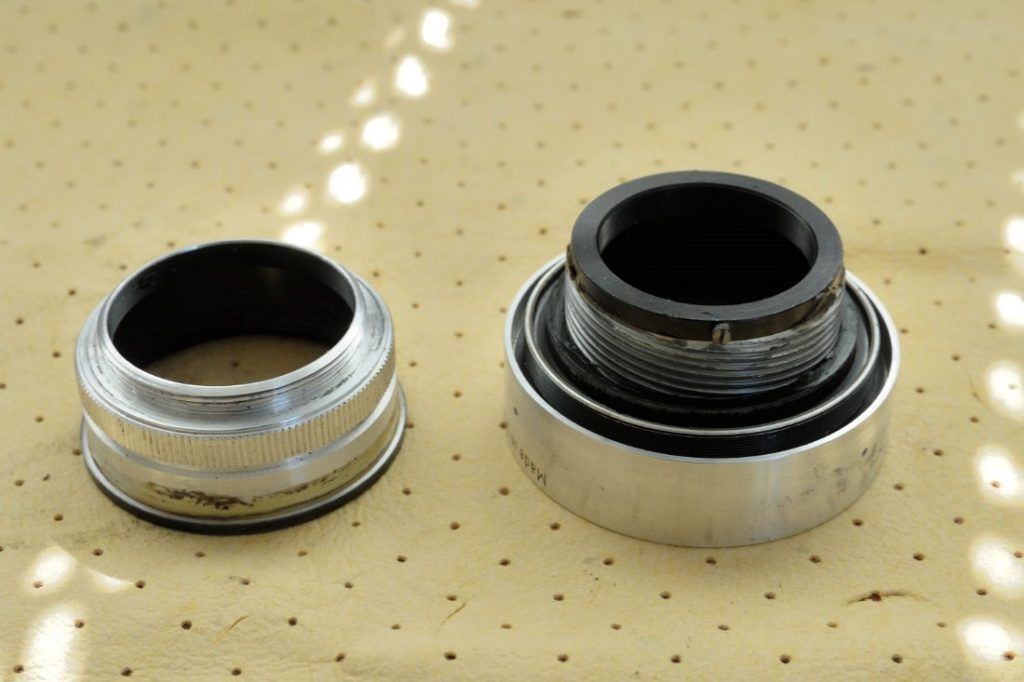 Now you can see that small screw on the right.

It is a good chance that there is already some mark on the ring, made in time by the limiter screw contact or made in factory at the initial assembly.  If you can’t see it, make your own. Put the line/dot on the ring, where it touches the limiter screw. Use the screwdriver or permanent marker. This mark is essential in helping us to determine the right step (thread starting position) during resembling, so be sure that you don’t forget to make it! 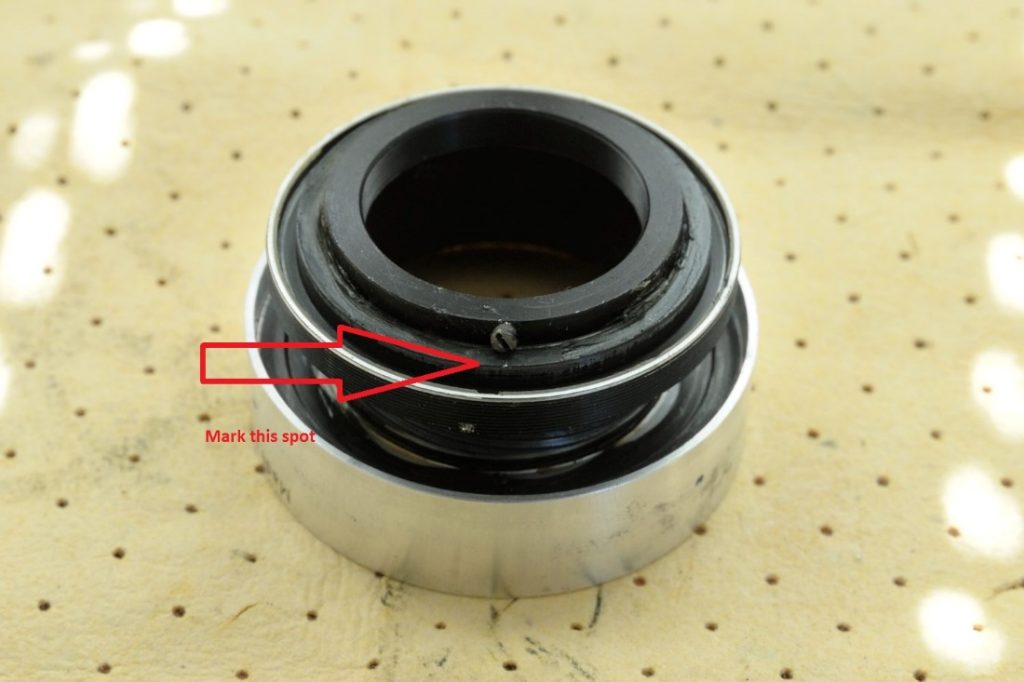 Step 6. Removing focusing limiter screw.
Take the screw off and put it in the safe place. 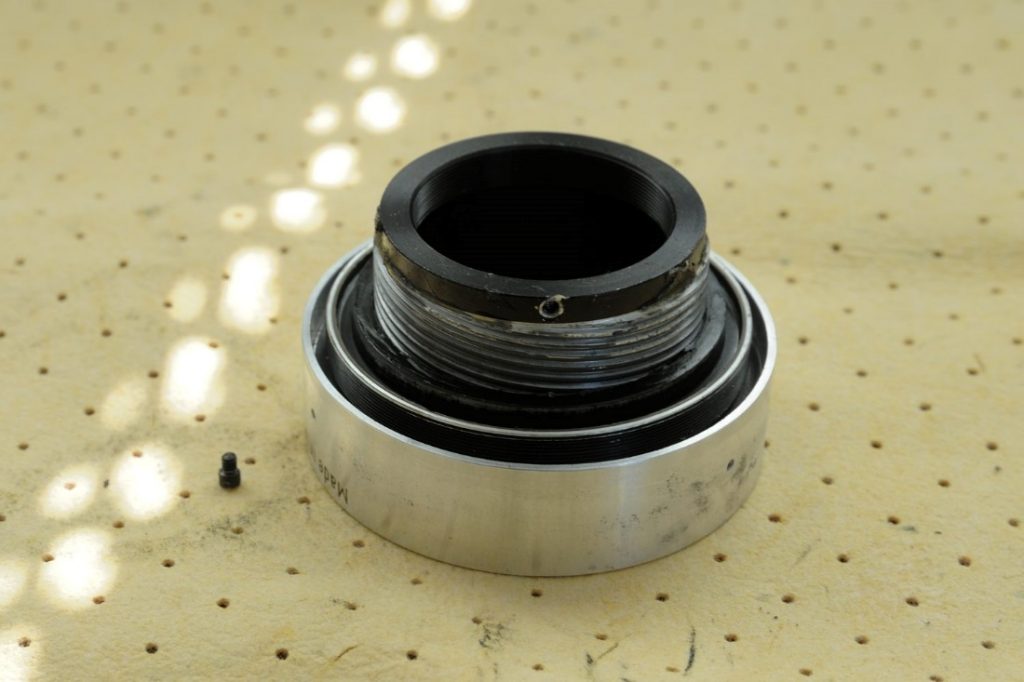 This is delicate part, beginners might have problems to reassemble the focusing mechanism if they don’t pay extra attention here.  Slowly turn the front inner focusing ring CW. At one point, it will separate from the thread! Look carefully at it from above  and try to remember the position of the mark, that we made in the step 5, in the exact moment when the ring comes off the thread. 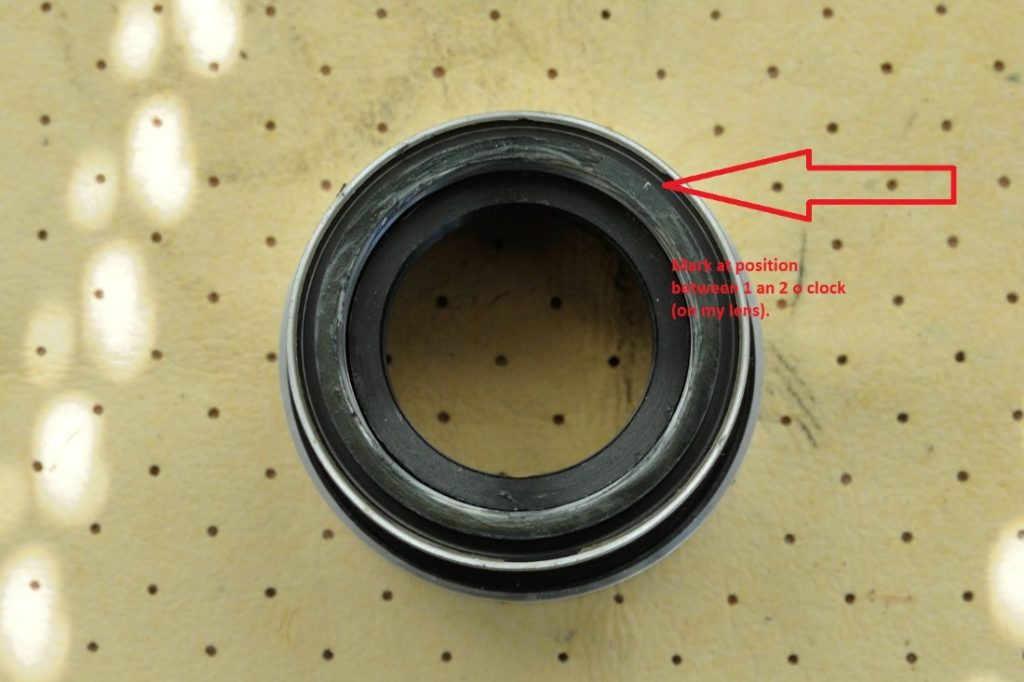 In this case, our mark moved to approx. 2 o’clock position from the viewer point of view. Before doing anything else, try to put the ring back, using this step position and turn it until it set on the thread. Do this few times to get the feeling how it goes on and off, since this is crucial for the later assembly.

Good idea is to make your own image of the step position (the image as the one above), which will help you to memorize it. Helios 44-2 has rather steep threads, so even if you miss this point, don’t panic, there will be only 4-5 possible steps-in, which you can try later. Some lenses though have very fine threads with many possible steps in, so it is good to build a marking routine for this stage. Optionally you can make another small line/dot on the rim of the thread bellow, which can later be aligned with the first dot on the ring.

With this last ring removed, we finished disassembling of the focusing mechanism 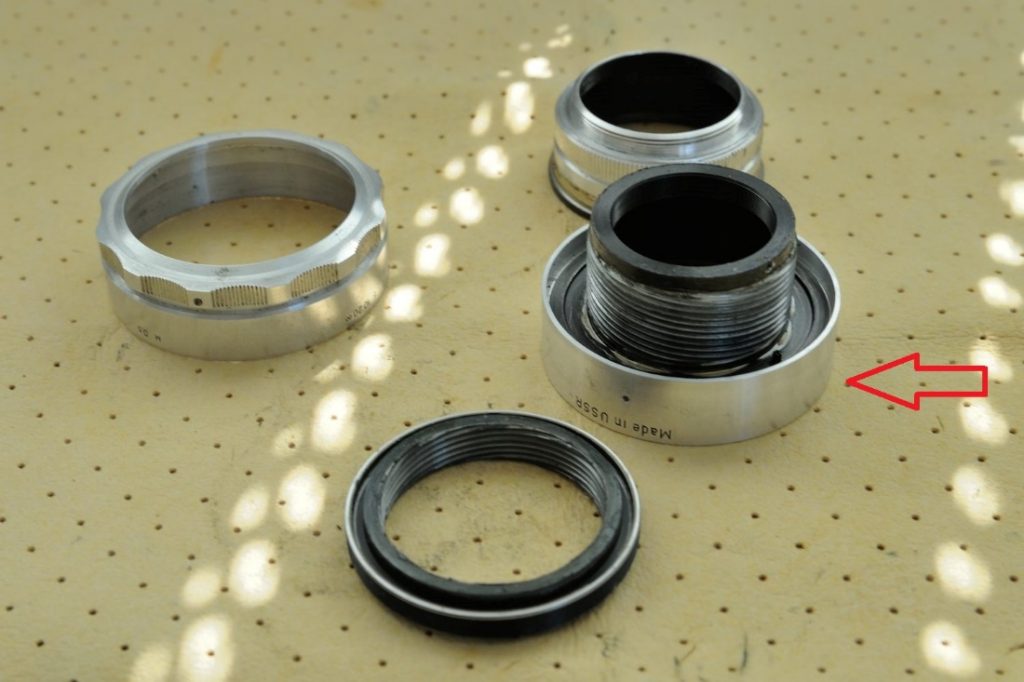 You can also remove the ring which goes around the front side of the focusing thread, but I didn’t, since it’s not needed for our job.

Bellow is the video, which should help you with the tricky parts